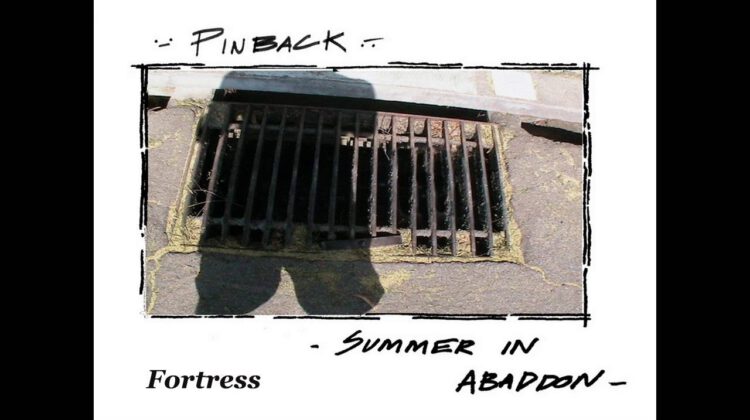 I’m sure we’ll all remember 2004 as the first year the music industry finally admitted to actually increasing their profits and yet still claims that file sharing is destroying their business. Because those massive mergers of conglomerates had absolutely nothing to do with it, clearly. There was an overwhelming amount of new records released this year, most of them disappointing, and the PopGurls asked me, mistress of the underrated, to give you a heads up on a few that might have flown below your radar.

1. Pinback — Summer In Abaddon
This CD almost languished in the pile of things I was “getting around to” this year because it has the most unremarkable cover art I’ve ever seen. “How could it possibly be good,” I thought. Then Rick Burch from Jimmy Eat World recommended it to me. I popped it in and immediately fell in love. Pinback and I have been inseparable since. It’s become the crack that’s getting me through until Spoon puts out another album. Maybe you heard “Fortress” in the opening scenes of The Killers episode of The OC? That’s the #1 indie rock song of 2004. I’ve learned an important lesson about not judging a book by its cover and can’t stop kicking myself for taking so long to listen to this album.

2. A Girl Called Eddy — A Girl Called Eddy
This album is, hands down, the saddest record of 2004. Imagine you’re 30something, divorced and have a series of minimum wage jobs on your resume. What do you do? If you’re Erin Moran you release an EP, start an indie label bidding war and release a tragically beautiful album about your heartbreak. The word lush seems inadequate to describe listening to A Girl Called Eddy, but it will have to do.

3. Ted Leo & the Pharmacists — Shake The Streets
On Ted’s fifth solo album, since leaving his D.C. hardcore outfit Chisel behind, his love for Elvis Costello-style songwriting just pours right out. Listening to this album is almost like listening to This Year’s Model with 1,000 times the hooks and equal amounts of social consciousness. It becomes difficult not to sing along with this album so beware if you take mass transit.

4. Brad Mehldau Trio — Anything Goes
Ok, imagine pop songs reinterpreted in the style of jazz on a piano by a genius. Dump Radiohead’s “Everything In It’s Right Place” and Paul Simon’s “Still Crazy After All These Years” in a bucket and stir until you hardly recognize them anymore. Throw in a few standards like “I’ve Grown Accustomed To Her Face” and “Anything Goes.” Push play. Mehldau ends up with one of the most intellectually engaging CDs of the year.

5. Ashlee Simpson — Autobiography
Look bitches. Ashlee Simpson can’t really sing and we all know she didn’t write her own songs or play any instruments on this album. Karen O can’t sing but we love her voice. Avril Lavigne doesn’t write her songs anymore than Ashlee does, but damn those are some catchy tunes. Madonna doesn’t play her own instruments but we’re ok with it. Give Ashlee a break. This is a killer pop CD. Listen to it and tell me your inner 14 year old, before you discovered Liz Phair/Tori Amos/Fiona Apple, wouldn’t have adored it. I vote for more teenage girls singing pop songs about how boys suck and how it’s ok to be weird, dark and moody. Damn, did you even listen to “LaLa”?

6. Butch Walker — Letters
Maybe you saw that Butch was one of Rolling Stone’s top producers of 2004. Maybe you know that this year he produced and co-wrote songs from Avril Lavigne, the Donnas and Simple Plan. I know you didn’t buy his album. No one did. You should know Walker wears his 20something influences on his sleeve – from an intro dedicated to Sunny Day Real Estate to his strumming of Nik Lowe’s “Cruel To Be Kind” as he goes into his own “#1 Summer Jam.” With all the production on it this is a very big sounding album, but when I get into his sappy lyrics I’m pretty sure I want Walker to be my boyfriend so I can make him a mixtape to inspire his next album. He’s got the hipster hunk who love/hates L.A. thing down cold.

7. A.C. Newman — The Slow Wonder
Carl Newman has been around as the secret weapon behind Zumpano and the New Pornographers since 1995. Finally Matador had the good sense to ask the Canadian wonder to put out a solo record and it is more than clear he is the harmonic genius behind every great moment on his bands’ previous albums. On top of his irresistible hooks Carl lays some of the most bizarre lyrics. Songs about secretaries, mysterious G-men and crashing on his floor litter his red-headed, foreign mental landscape.

8. Owen — I Do Perceive
Mike Kinsella, who is Owen, is one of the most talented guitar players around today. It’s amazing to me how unknown he still is. Some Owen albums are hit or miss, but on this one Kinsella is back to bitter break-up lyrics, where somehow he is most compelling. Best song title? “That Tattoo Isn’t Funny Anymore” – no, it doesn’t sound at all like the Smiths song but you’ve got to admire the reference.

9. The Futureheads — The Futureheads
You’re feeling Franz Ferdinand because it’s a great dance record? The Futureheads are who Franz listen to on their tour bus. That’s how cool they are. They have a very similar sound, with the angular, bumpy dance music, and a suit-wearing hipster band aesthetic. The thing that makes Futureheads different from Franz is that they are much, much more spastic. If you’re not an accomplished dancer then you want to skank to the Futureheads.

10. The Cardigans — Long Gone Before Daylight
Where has this band been since 1997? Who knows, but they went away and grew up (and Nina dyed her hair brown). This album is a lot slower and deeper than the words “The Cardigans” might immediately bring to mind. There is an amazing song written from the twisted psychological mindset of a woman in an abusive marriage and several that seem to stylistically reference Stevie Nicks. This band deserves another chance from us all with a fresh set of ears on and memories of past one-hit wonderness wiped from our minds.