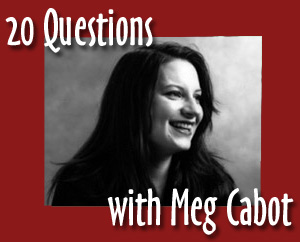 Meg Cabot just might be the most successful Young Adult author since Judy Blume. She has published over 30 novels for younger readers as well as adults, including The Princess Diaries series (the latest book being released last month), The Mediator series and 1-800-WHERE-R-YOU. The Princess Diaries spawned two successful movies and 1-800-WHERE-R-YOU was turned into a Lifetime series in 2003.

But in this world of Internet instant gratification, she’s definitely more accessible than Miss Blume. She updates the blog on her site regularly, and hosts chats where her fans can ask anything from her writing influences to what’s going to happen next to Princess Mia. Now, Meg talks to PopGurls about being so prolific, interacting with her fans, and what she wants to ask J.K. Rowling.

1. You’ve written well over thirty Young Adult and adult novels since 1998, when your first novel, a historical romance, was published. That works out to about five books a year – which is amazing (and good for us!) – or one book about every two and a half months or so. How do you manage to stay so prolific?

Well, I know it seems like five books a year, but there was one year very early into my career where I foolishly agreed to write TWELVE books for various publishers in twelve months. So that year sort of threw the curve – and it will NEVER happen again! I really only write about three books a year, and you have to remember, they’re mostly YAs, so they are half as long as the adult books I used to write.

2. Your scope of writing spans so many genres: YA, historical fiction, scifi, mystery. Do you have a different approach when you sit down to write in a particular genre?

Not really. To me, a story is a story. I will put more pop cultural references into a humorous contemporary novel, like one of The Princess Diaries books, so I do spend more time while I’m writing that watching TV and trolling the ‘net… but that’s just to pick up more FLUFF, as my readers like to call it.

3. Do you have any little quirks when you are writing?

I try not to since my very favorite writing instructor, Dan Gotch, my 8th grade homeroom teacher, always said, “Real writers can write under ANY conditions…even from JAIL.” So I’ve tried not to get spoiled. But I do like writing in bed (which you could also do from jail) and drink Tab (which you can’t get in jail) while I do it.

4. When you write, do you edit as you work, or do you wait till the end and then polish? How many drafts does an average novel of yours go through?

So many drafts I couldn’t even count them. Every day, I read over what I wrote the day before. About once a week, as I’m writing, I go back and reread the entire manuscript. So by the time I’m done, I know the story practically by heart. By then, I’m extremely sick of it.

5. Did you always intend to write adult fiction and YA? If not, what led you into YA?

I had a friend who was a children’s editor. She kept pestering me to write a YA novel. I finally wrote one about a girl whose mom was dating her teacher (Mia), but my friend said that wasn’t much of a story. She suggested I write a story about a princess instead. But I was too lazy to write a whole new story, so I just turned the heroine in my story about the girl whose mom is dating her teacher into a princess, thinking my friend would never know it was the same book. She knew, and her publishing house rejected it. It was the first of many rejections The Princess Diaries received.

6. What’s the biggest obstacle you face when writing? That is, what gives you the most trouble? Conversely, what brings you the most joy?

7. Did you ever think you’d end up writing five (and counting!) books about Mia (of The Princess Diaries)? What’s the best part of getting to do that? Is there a downside to it?

I pretty much planned from the beginning that Mia’s books would go on until she turned 18. I always thought I’d end up writing 16 or so books in that series. I am working on Book Seven now. I can’t think of a single downside to that…except of course as Mia ages, the situations she gets into become more mature, and a few readers have been a little shocked. I can’t wait to see what they think of Book Six.

8. Do you have other people read your work while you’re writing, or do you like to wait until the story is finished?

After my book is done, I’ll send it to three or four people, including my agent, to read. They look for errors and typos. I don’t let anybody read it WHILE I’m writing it. That would be horrible.

9. Did you find that writing under several different names gave you a freedom to do things you wouldn’t have been able to otherwise?

Not really. The only reason I wrote under several different names was because I had several different publishers – one for my adult novels, and two for my YAs. When I turned in the first book in my Mediator series, my Princess Diaries publisher rejected it, so I sold it to another publishing house under the name Jenny Carroll, so as not to get into contractual squabbles with the first publishing house.

Now that all of my books will be coming out from the same publishing house, they will all be published under my real name (um…which is Meg Cabot. You know that, right?)

10. 1-800-Where-R-You was turned into a television series, and as everyone knows, The Princess Diaries launched two successful movies. How did you feel about the final products? Did it feel different to see your characters be able to have their development stretched out over a season rather that condensed into an hour and a half?

That said, I think Anne Hathaway made a perfect Mia, and Caterina Scorsone makes a perfect Jess. I just can’t watch them without feeling like someone is stepping on my grave.

11. What from The Princess Diaries books do you wish could have stayed in movies?

Well, I’m sad they killed the dad. I love the dad. He is based, in some ways, on my own dad, who is dead. So when they called to say they were killing him, I was sad. But since they killed him to make Julie Andrews’ part bigger, I understood.

12. Who is your favorite TV couple of all time? Movie couple?

Do Nick Lachey and Jessica Simpson from MTV’s Newlyweds count? I just love them. I’ve heard rumors they’re splitting up, and I hope it’s not true. I also love Cher and Nicholas Cage in Moonstruck.

13. Most of your books have gone on to become beloved series. When you start on a completely brand-spankin’ new book with new characters, do you keep the possibility of making it a series in the back of your mind?

No. Only with certain books. The Princess Diaries and The Mediator, yes. 1-800-Where-R-You and All American Girl, no. Those books only became series because for 1-800, the publisher wanted it to, and for AAG, the readers wanted it to. I have no plans to write sequels to Teen Idol, for instance. I pretty much know from the start if I want to go on with a story or if it’s a one book deal.

14. Name one scene that you’ve written that you go back to re-read often because you like it so much.

From my own books? I never go back and reread my own books. I’m totally sick of them. That said, there’s a scene at the end of The Princess Diaries 6 that I’m not completely sick of yet. It’s between Michael and Mia in a pizza parlor. But the only reason I’m not sick of it yet is because I didn’t have to rewrite it very many times. It came out exactly the way I wanted it to the first time. That is highly unusual for me.

15. You update your blog on MegCabot.com quite frequently and you’re very active on MegCabotbookclub.com. What is it like to be so accessible to your fans?

It’s fun, but hard. Sometimes it feels like I’m always working. My husband says my idea of a vacation is to go someplace else and work. I’m a bit of a workaholic. That’s why I’ll never have kids of my own. For one thing, it wouldn’t be fair to them, since I’m always working. And for another, I feel like I already have kids, I’m in contact with so many readers all the time.

16. You host several chats in which fans get to ask you anything from writing advice to spoilers for your next books. If you could have a chat with any author, who would it be, and what would you ask?

I would definitely ask J.K. Rowling what she has planned for Hermione and Ron and Harry – especially Hermione. I love that girl and don’t want anything bad to happen to her.

17. After returning from your book tour in England, what do you find to be the biggest difference between UK and US fans? What surprised you the most?

The UK readers are much more hesitant to speak in public than US readers. When I speak in the UK, and ask if there are any questions, it takes a while for people to start raising their hands. Here in the US, people start raising their hands before I’m even done speaking, and I have to be all, “Please save your questions for the end.” It could be that UK readers are just more polite than US readers.

18. What three personal things do you bring on all your travels?

Hmmm, I’ve never been asked that before. But I always bring a fun book to read in the bathtub, ear plugs because hotels can be noisy, and over the counter sleeping pills, because I’m an insomniac.

19. What is the embarrassing story that your mother breaks out in mixed company?

After I heard this, I was never able to eat corn again. To this day, I can’t stand the sight of it.

20. Aside from writing, what is one talent you wish you had?