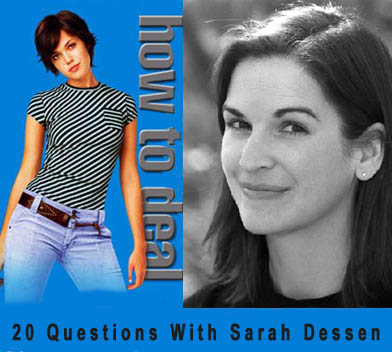 Sarah Dessen is the author of five young adult novels including the completely separate That Summer and Someone Like You which, through the miracles of Hollywood, have been combined into one story. The result, titled How To Deal, stars Mandy Moore (referred to on this site on more than one occasion as The Cutest Girl in the World).

Just a week before her big-screen debut – of sorts – Sarah sat down to answer our 20 Questions.

1a. You find out that a movie you’ve been anticipating is based on a novel you haven’t read. Do you read the book before you see the movie, or do you wait until after?

I usually see the movie, and then read the book. But I bought The Hours to read before I saw the movie, then flaked out and never went. I’m not sure why that is.

1b. You go to buy the novel and the only cover available features actor(s) from the movie. Discuss.

It doesn’t really bother me. But maybe that’s because I have my own tie-in paperback? The book is still the same, at any rate. And my books are already selling more with Mandy Moore on the cover, so I don’t think I’ll complain.

2. How To Deal was originally two completely separate books, massaged into one screenplay. Did you have any contact, at all, with the screenwriter (Neena Beber)? Did you send telepathic messages to her, in hopes that some of your favorite scenes and characters would remain intact?

I sort of had to make peace with putting the characters into her hands…but I was definitely hoping for the best. We’ve never met. But I’m sure the last thing she’d want is to hear from me…it’s probably hard enough doing an adaptation without the writer breathing over your shoulder. Although I’d hope I could keep myself from doing that.

3. Mandy Moore is the main character (Halley) in How To Deal, but if you had to cast the character based on the way you wrote her, which young actress working in Hollywood today would fit the bill?

This is such a hard question to answer…because to me, Halley is a real person: When I close my eyes, I can see her perfectly, and she doesn’t look like anyone but herself. I do think that Mandy is much prettier than I ever imagine my characters being… but again, I’m not going to complain about that. Not at all.

4a. Okay. You knew it would come up. You’ve described Mandy as being “tall,” “glamorous” and “genuine” when you met her during filming in Toronto. Did you know anything about her before she was cast in this movie?

Oh, yeah. She was in all the magazines I subscribe to, usually wearing a pair of shoes I’d die for, and I’d seen her on MTV, all the way back to her early videos. Plus there was A Walk to Remember, which was all over the place. What surprised me was how many people who weren’t teenagers knew who she was. When I heard my mother explaining to someone how Mandy was “not showing her midriff all the time, like Britney” I knew she was more popular than even I’d imagined.

4b. Did you have preconceived notions of what she would be like in person?

I had no idea what to expect. It’s funny how celebrities always seem smaller in person, but she was just the opposite: She’s REALLY tall. And I thought she’d act more like my students at UNC (University of North Carolina at Chapel Hill) who are about that age, 18-19, but she was so serious and professional. I was really just concentrating on not acting like a total dork. I was so nervous I can’t even remember what I said to her.

I like both…I’ll admit right here I’m a huge Center Stage fan, and she has two songs in that movie, plus a video on the DVD, and I love that. But I also really liked A Walk to Remember. Plus now she’s doing this album of remakes, and she does [a cover of XTC’s] “Senses Working Overtime,” and how can you not love that?

5. Honestly, how surreal is it to see commercials/posters all the time for something based on your work?

It’s incredibly exciting, almost too exciting. The worst part is you want to grab anyone passing by and point to it and say, “That’s my book!” but that’s really not advisable, as people either don’t believe you or think you’re a psycho. I’ve seen it go both ways, actually. The weirdest part is to be alone in a movie theatre and have the trailer come on, then just sit there grinning like an idiot while the people around you wonder why you’re so crazy about Mandy Moore. It’s almost impossible to contain myself sometimes.

6. Your novels all have teenaged narrators. What do you do to keep in touch with your inner teenager?

Well, I’d love to say I watch a lot of MTV and subscribe to all these magazines for research…but the truth is, I’d do that anyway, even if I was writing about atomic particles. I think we live in such a teenage-driven culture these days it’s not hard to stay in the mindset. But a healthy diet of Britney gossip and 90210 reruns helps.

7. Someone is describing your writing to a friend – what would be your tagline?

Oh, God, I’m terrible at taglines, almost as bad as I am as describing what my books are about. I always wish I wrote suspense books, so you can be like, “It’s about these guys, and they rob a bank and blow up this cathedral…” My books are so much harder to do. But my lame descriptions always begin with, “Well, it’s about this girl….” This is why my editor writes the jacket copy. I’m incapable.

8. Do you have a writing ritual? Any suggestions for those of us who have a hard time sitting down to write?

I write at the same time, in the same place, every day. I think there’s a lot to be said for training yourself, your mind, that you have a certain time that you should be writing. For me, it’s 3-4:30pm. It doesn’t matter where I am, at 3pm I have that feeling, like I should be writing, and if I’m not, I better have a damn good excuse.

9. At what point did you look within yourself and say, “I can become a writer”?

I don’t think I ever felt that confident, even now. I think when I was writing the most, right after college, was when I was the most scared I couldn’t do it, so I was constantly trying to prove it to myself. Writing is so completely out of my control, it feels like: Some days are just terrible, and I lose all confidence, and just when I’m about to give up entirely, I have a great day and slam out ten pages. I never called myself a writer out loud until I was published. I still have problems saying it now. If you met me on a plane and asked what I did, I’d probably tell you I taught creative writing instead of just saying I was a writer. It’s like I don’t want to jinx it or something.

10. David Sedaris grew up in Raleigh, North Carolina, which is your neck of the woods. Do you drive by landmarks mentioned in his books and get a little jolt from it?

I LOVE David Sedaris. And it goes beyond even him: My friends are always reporting sightings of his brother, The Rooster, and his floor finishing business…Someone I know saw him at a restaurant. He’s a true celebrity here.

11. What is your essential summer treat (fresh squeezed lemonade, a trip to the beach, running barefoot in the grass)? What’s your favorite for winter?

For me, in summer, it’s all about devilled eggs. I’m addicted, but I feel strongly they can only be eaten between Memorial Day and Labor Day. It’s like this weird rule I have. As far as winter, it’s my least favorite season – I think my favorite thing to do in winter is flip through the calendar and count the days until spring. However, I am a bit of a sucker for Christmas cookies.

12. You’re trapped in an elevator and help isn’t coming for at least 24 hours. Damn elevator-repair unions. In an odd, but unrelated coincidence, the piped-in muzak will continue to play, but only one song, on repeat. Which song are you going to be spending the next day with?

“American Pie,” by Don McClean. When I was in high school I memorized the whole thing, all million verses, and I always sing it in my head when I’m in panicked situations, to distract myself. It would probably save me in that elevator.

13. If your husband was a character from an Aaron Spelling TV show, which one would he be and why?

I’d have to say maybe Ray Pruitt, but without the whole beating-Donna-up thing. Or maybe Nat from the Peach Pit. Not that he looks like Nat, but he is full of wit and wisdom. And he makes a mean turkey burger.

14. You get to pick one Trading Spaces designer to redecorate your home office. Who do you pick, and what is the one thing you would beg him/her not to touch?

I’m not a big watcher of Trading Spaces, but after consulting several people I have been told that the correct answer to this question is Vern. As far as what I wouldn’t want touched, it would probably be my desk. I’m really weird about anyone messing with anything on it: I have all these weird things that only mean something to me, and I like them just where they are. I’m really superstitious about my writing space, totally territorial.

First: They don’t have to be dry cleaned. Dry cleaning is the true bane of my existence. Second, a bit of a crop is always nice, show a little ankle. And no flare. Flare does not work for me. It helps, too, if they don’t cost a whole lot because then I’ll feel like I can never wear them except on special occasions. (I am so neurotic, I know.) I think I’m up to about twenty pairs of black pants now, and counting. But I love black because it’s slimming, goes with everything, and because I am a messy person who always spills whatever she’s eating on whatever she’s wearing.

16. If you were given carte blanche to create your own magazine, what would the genre be? Name three monthly columns.

Probably a mix of entertainment and celebrity. I’d love a “blind item” column on celebrity gossip, because it’s like brainteasers trying to figure them out. And maybe an interview every month with a celebrity on some subject entirely unrelated to their field, like Renee Zellweger discussing home improvement or Sarah Jessica Parker detailing how to balance a checkbook. Finally, I’d have a good book section, because a lot of women’s magazines skimp on books, or leave them out entirely.

Oh! God! This is so hard, on the level of Sophie’s Choice. But I’d have to say…Jordan Catalano. He’s just sexier.

18. Best Celebrity Couple, as presented by “US Weekly”: Ben and Jen or Britney and Justin?

Britney and Justin, absolutely. I like Ben Affleck and J. Lo, but they kind of lost me in the video when he ran his hand over her butt. After that, I was out.

19. Menudo vs. New Kids on the Block. Who wins in a street brawl?

Menudo. There’s like an army of them, they had so many people in that group! They’d never run out of people to kick your ass.

Mashed, absolutely. With a few lumps, red potatoes preferably, and lots of pepper.