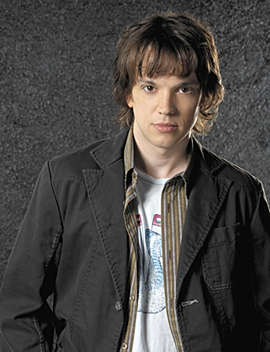 You might not know that Eric Millegan can sing, but it just might be a matter of time until this Broadway-trained actor belts out a few tunes to surprise his colleagues at the Jeffersonian Institute. After ten years of paying dues in New York, he decided to try his hand in television. And L.A. has been good to Eric – within one short month of arriving, he landed a role as young grad student Zack Addy on FOX’s Bones. Now in the middle of Bones second season, Zack has graduated, tidied up his look and is quite ready for the next big challenge.

Eric talks to PopGurls about his role on Bones, musical theater and what he thinks of Isaiah Washington’s alleged outburst on Grey’s Anatomy.

1. How did you find out that you got the role of Zack Addy on Bones?

On the phone. My manager (at the time) called me and my agent and put us on conference call to deliver the news. It was very exciting – I had tested for the studio for Kitchen Confidential earlier that day and then I did my test for the network for Bones (which was called Brennan at the time) that evening. I was told that Brennan would be making a decision that night so that Kitchen Confidential could then decide whether or not they wanted to test me for the network for their show the following day. I told my partner that if I got Brennan that I would immediately return to New York City (where I had been living) to be with him until the show began shooting. So getting cast was two pieces of good news – getting the show and getting to go back home.

2. Zack’s graduation and new job also came with a spiffy new haircut. Was that discussed with you, or was it your idea?

Hart Hanson (the show’s creator) and I had talked about it right from the beginning of the first season. I was getting tired of my hair being long and I wanted to cut it. Hart thought it would be good as a storyline for the second season, and that’s what ended up happening.

Incidentally, because of the order in which we were shooting that particular episode [“Judas on a Pole”], it looked like we’d have to cut my hair on the first day of shooting and then wig me for all the scenes in which my hair was long. I was really against it, and Hart was too. But we still had to shoot in that order because of the availability of the actor who plays Brennan’s brother [Loren Dean]. So that is why Hodgins puts a hat on me at the end of the scene in which my new look is revealed. That allowed us to have my long not-yet-cut hair hidden in a hat during the final scene when I knock on the window at the diner.

3. Why do you think Zack doesn’t have much luck with the ladies?

I have no idea. Nor does Zack. Hopefully, one day we’ll both figure it out.

Right from the beginning. I felt good about this group of people when we first got together to read through the pilot in Hart’s office. They’re all very kind, respectful, hard working, talented people. I think we probably all bonded in the fact that we were we liked the project, that we were all blessed with a wonderful opportunity to work together on the show. We liked Hart and we were excited about his vision for the show.

5. Before coming to Bones, you were doing a lot of musical theatre in New York. What was the biggest change in coming to L.A.? What surprised you?

The biggest change was being away from my partner. He now lives here full time, but for my first year in L.A., we were apart from each other and that was hard.

What maybe surprised me was how quickly the town embraced me professionally. I got off the plane and was immediately getting good auditions and getting called back. I flew into L.A. on a Monday at the beginning of February. I auditioned for Brennan that Thursday. And by the end of the month, I had a TV show! After struggling for most of the time I spent in NYC, it was an amazing three weeks of feeling wanted. Yes, I did some great stuff while living in NYC, like Jesus Christ Superstar on Broadway and Harold & Maude at the Paper Mill Playhouse, but JCS only ran 5 months and H&M only ran for one month. Most of my 10 years in NYC was filled with rejection and near misses.

6. Speaking of your lead role in the Harold and Maude musical — what was it like to step into a new version of a role that so many people have loved?

It was great. One of the highlights of my career. Getting to originate a role in a brand new musical was a dream come true.

7. You said that one of the messages of Harold and Maude is about ‘Be with the person you’re in love with.’ Why did that resonate with you so much? Is there another film that also makes you think of that?

That’s a hard question for me to answer. Not because there is no answer. But I’m finding it difficult to put it into words. As for another film that makes me think of this, my mind is drawing a blank right now. Great question though.

I thought the Dire Straits lyric [from “Money for Nothing”] was “money for nothing and your checks for free.” I just realized it was “chicks” two weeks ago.

9. With your musical background, any chance you’ll be singing on Bones?

I hope so. Hart didn’t know that I sang when he cast me. Once I mentioned it while we were shooting the pilot, he immediately wanted me to sing on the show. But we haven’t gotten around to it yet. If I sing on the show, it has to fit into the character – how we reveal Zack’s secret singing gift must be handled carefully.

10. What five albums do you have in your personal rotation currently?

The cast recordings of Company and A Class Act. The soundtrack of The Adventures of Priscilla, Queen of the Desert, a mix CD that my sister gave me for Christmas, and something else that I can’t remember are in my car CD player.

11. You write a blog for the NBA.com — how did you get involved in that?

I wrote a column for OregonLive.com for 5 years as “The Fan” of the Portland Trail Blazers. When I came to L.A., one of the people who works for 20th Century Fox recommended me for the Blog Squad on NBA.com. I gave [NBA.com] samples of my writing and they liked them. And that was that. I love it. The only thing is that I don’t have as much time to watch the games as I did when I was unemployed. I do have the Blazers/Hornets game on right now, though, as I answer this question.

12. There’s been a lot of creepy things that have come up on Bones — what’s your biggest creepy fear?

Well, I do spend time looking at the skeletons and thinking about how that will one day be all that’s left of me and that’s really freaky if I think about it too much.

13. What would go on your Bones blooper reel?

Oh boy. Hm. I’m sure I’ve blocked out the good stuff. Lemme think. I’m not sure. I mess up lines like everyone else. I can be one to curse when I do. I suppose that might end up on a blooper reel.

14. What three personal things do you bring on every trip?

My wallet, my keys, and my phone. Boring answer, I know.

Hm. I don’t really agree with that. I think actors have to be able to tell the truth as their character. Which is not lying, to me.

But the biggest lie I ever told was that I had met Michael J. Fox on a school field trip to Washington D.C. when I was in the 8th grade. I had my picture taken with one of those cardboard cutouts of him and the photo looked so real that I told my family that I met him. I didn’t come clean ’til years after. I’m embarrassed by the whole thing. So stupid.

16. What was the first thing you did that made you think: “This is what I want to do – be an actor”?

I was doing community theater in Eugene, Oregon when I was 7 years old. There was a commercial on TV about how you can be whatever you want to be when you grow up. I asked my mother if that was true. She said yes. And so I decided right then and there that I was going to be an actor.

17. As an openly gay actor, what do think about the current Grey’s Anatomy drama with Isaiah Washington and T.R. Knight?

Obviously, I wasn’t there. But if he did call T.R. Knight a “faggot” only to then deny it at the Golden Globes, then that’s just stupid and wrong. T.R. shouldn’t have to put up with that at work. I wish they’d fire Mr. Washington and make it clear that that kind of behavior is unacceptable.

18. When you went to LA, did you make a conscious decision to be out — or was it a non-issue for you?

Both, I think. It was a non-issue for me and I made a conscious decision to keep it that way.

19. What would you like to see come up on Bones for Zack?

20. What do you have coming up next, in addition to Bones

In April, I’m going to be doing Romeo & Juliet: Redefined at the Gulfshore Playhouse in Florida. It’s a new theater company that a friend of mine has been starting from the ground up. This particular production will include parts of the Romeo & Juliet ballet, parts of Shakespeare’s text, and parts of West Side Story. I will be playing Romeo. I haven’t seen a script yet, but I’m told that I’ll be doing some of Shakespeare’s actual text and then I’ll sing “One Hand One Heart” from West Side Story. I’m looking forward to it.

Property of PopGurls.com — Do not repost without permission.