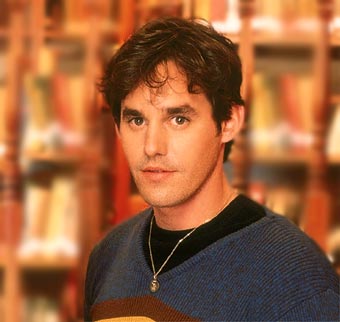 Three out of four PopGurls are diehard Willow/Xander shippers. There’s a certain sweetness as a lifelong friendship blossoms into love, but, really, we all had crushes on Xander. He was the first person we chose to feature in lust: Nick Brendon plays him with such an understated sincerity. Xander or not, Nick is the very, very cute, very funny boy next door you fall in love with.

So, with the end of Buffy, we’re very excited to bring to you 20 Questions with Nick Brendon.

Gotta go with Hot!Monkey!Love Xander! I just like the way it sounds.

2. You’ve played the same character for years now. What do you do to keep it fresh? And have you kept any of his wardrobe?

Well I’m fresh by nature. Seriously though, Xander had a sort of coming-of-age and I was able to grow and change with the character through the years. As for the wardrobe – tho’ I hold Xander near to my heart, I don’t really want to walk around dressed like him. You gotta draw the clothesline somewhere.

3. Joss always said Xander was the character he created in his own image. Did that put extra pressure on you, to play the character a certain way?

You mean to be modeled after a genius with a brilliant sense of humour who goes on to live the life of his dreams? I can’t say that sucked.

4. What’s one question you’d like to ask everyone, and they’d have to answer honestly?

If you build it, will they really come?

5. Do you have a litmus test when meeting new people? Things that you slip into conversation to see how they react, or mental checkpoints that you make? What are they?

6. Have you ever fallen for a pickup line? What’s the best you’ve ever heard? Was it from a guy/girl?

7. What one thing will you never, ever do for money?

8. What is it going to take for you to do a movie about twins?

9. Gayness aside, why do you think Willow and Xander were never an official item?

10. How do you feel, given that Andrew has stolen some of Xander’s thunder as comic relief in season seven?

That bastard got all the funny lines. What can I say? He’s adorable.

11. What are five things that you bring with you on every trip?

My wife, three of her bags and a clean pair of undies.

King of the Hill, and um…Married by America.

14. If you could do anything for a living, regardless of talent or training or wealth, would you still be an actor?

No, but you could still watch me on TV. Shortstop for the Dodgers, baby.

15. You get to go back in time and be in any John Hughes film. Which one, who would you be and why?

16 Candles, all the way – my heart says Farmer Ted, but my ego says Jake Ryan.

17. You’re stuck on a desert island. You have to select one form of potatoes to eat. Forever. Which do you choose? Scalloped? Baked? Mashed (Chunky or smooth)? Fried?

Scalloped. (‘Cause they have cheese too!) Unless I could have a baked potato bar.

18. You and Justin Timberlake have very similar tattoos. Compare and contrast. Do you think he was trying to bite your style?

Justin rang and asked if it was okay. I cleared him for tattoo take-off.

19. Xander was our first choice for “Geeky Boys We Love.” What do you think it is about him that makes the gurls swoon? And do you think that geeky gurls have the same effect on guys?

I think it’s about vulnerability and innocence. Yes I do think it goes both ways – that’s a girl you could really love.

20. If you were writing the final script for the final Buffy, what would Xander’s last line be?

“Surely you’re joking… yes, I did just call you Shirley.”

See what we loved about Buffy

Find out how we would have ended Buffy