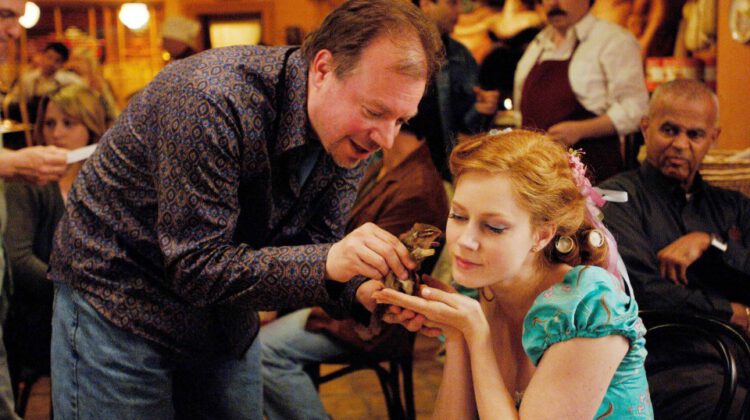 I am utterly fascinated by Kevin Lima‘s career — an eight-year association with Marc Kohler’s The Puppet Workshop, a summer job with Eve Brook’s Costume Shop where he helped create costumes for the Ringling Bros. and Barnum and Bailey Circus and extensive experience with a little place called Walt Disney Pictures. And I think that he just might be the Zac Efron of the Disney set. If only all the 12-and-under girls knew more about him, he’d be pursued by excited fans, giddy about talking to the man who’s worked with several Disney Princesses. The latest princess being Enchanted‘s Giselle [Amy Adams], who crashes into Times Square after being pushed into a magical well by an Evil Queen [Susan Sarandon]. It’s a very charming movie, a stunning showcase for Amy Adams who will certainly win fans of all ages.

Kevin talks to us about directing Enchanted (where he was also voiced Pip, the Squirrel, in New York), Disney Princesses and gives some advice for aspiring animators.

1. Congrats on the huge holiday opening for Enchanted! What was your first reaction when you heard the news and how did you celebrate?

[Walt Disney Distribution President] Chuck Viane called to report the grosses at 7:45 in the morning and I was so thrilled I went immediately back to sleep. I guess I had been so worked up, my body let me finally relax.

2. Enchanted has an insane amount of references to vintage Disney. What’s your favorite random reference? And which obvious reference were you most proud of the way it turned out?

The obvious reference that I’m the most proud of is “Happy Working Song.” It didn’t exist in the first draft of the script that I had read, it was an idea that I had and it set the tone for the loving homage Enchanted became.

My favorite random reference? It’s probably one of the most hidden. The troll from the opening animation wears a collection of Disney princess dresses as his loin cloth. He even wears two purple sea shells as earrings. They’re [The Little Mermaid] Ariel’s shell bra!

3. You’ve said that as soon as you met Amy Adams, you knew she was the only one who could play Giselle. But what was it that struck you, the moment that made it CLICK in your head?

The thing that I was most struck by was her ability to invest in Giselle, without ridiculing the character. She was, quite honestly, the only actress I saw who wasn’t embarrassed by Giselle.

4. Why was Times Square chosen as the gateway from Andalasia?

Because it’s the complete opposite of anything Giselle would have confronted in Andalasia. I was also looking to do a scene that was similar to the “haunted forest” in Snow White and thought that Times Square reflected the emotion of that sequence pretty well.

5. I walk through Times Square every day and I was really impressed with everything you captured there. What was it like shooting there and did you have to do it at 4am so that no one would be around?

It was actually much easier than I had anticipated. I must have “director’s amnesia” saying it was easy! You see, we were lucky in some respects – if the crowd reacted to what we were staging, we could use it in the final film. We were dealing with fairy tale characters running around New York City after all.

We started filming the night work after the theater crowd had gone into their shows, basically 8pm and worked until sunrise, about 6am. We also did quite a bit of day work in Times Square, controlling a couple of lanes of traffic and some sections of sidewalk. That was a bit more difficult.

6. Now because of Grey’s Anatomy, many people think of Patrick Dempsey as “McDreamy.” What nickname would you give him and why?

Are you trying to get me in trouble?! There might be a sequel headed our way!

7. What was a great blooper from filming?

We have endless footage of Amy falling in the giant wedding dress. I know I shouldn’t laugh, but, like the old silent comedies, it’s just so darn funny.

8. Is there anything you really wanted to fit into Enchanted but just didn’t make the final cut?

The Italian Restaurant sequence was at one point a much larger to do. The struggle between Pip and Nathaniel caused the restaurant to catch on fire, which in turn brought the fire department and news vans. It would have been great fun and given the second act a much needed comic lift, but the budget and schedule forced us to reconceive the scene.

9. Who is your all-time favorite Disney Princess and why?

My all-time favorite, that’s a tough one. I might have to say Ariel, from The Little Mermaid. The film was one of the first I worked on at Disney and I really appreciate her spunk.

10. If we could drop you into any animated film for you to stumble around and play for a while, which would it be? What would you want to do?

I’d probably want to be dropped into Bambi. I’d stop those hunters from killing his mom…wait if I did that, there’d be no story.

11. Do you ever break out into song while doing mundane things like buying toothpaste or putting air in your tires?

Every day! Funny, I now see it manifesting itself with my 8-year-old daughter. Maybe it’s in the genes.

12. What is your favorite thing when you start developing a new character? How do you get into their head?

I just start talking to myself in character. Honestly, I think it freaked out Bill Kelly, Enchanted‘s screenwriter, when I would start skipping around my office with my elbows up and pinkies raised.

13. What’s it like to see little girls get so excited to be dressed up as a character you’ve created?

I get a great thrill from it. I’ll tell you, there’s nothing better than watching the characters you create live on and inspire.

14. You’re currently working on Little Nemo in Slumberland. I was first introduced to Little Nemo through an utterly fascinating Nintendo game years ago. What drew you to Little Nemo, and what are you dying to try out that you’ve yet to do on film?

Boy, you’ve done your homework. I’ve been a fan of the comics for some time now and just recently I picked up a beautiful 100th anniversary oversized book of Windsor McKay’s comics. I’m hadn’t shot Enchanted yet, and was already thinking about what might be next and the book shows up demanding to be translated to the screen, so I took it on.

The thing that I’m the most excited about with the subject is getting to play in a magical landscape. There are no limits to what can be done visually. I think it would be interesting to do the opposite of what I’ve done with Enchanted, put a real human in to a created world. The trick is finding an emotional center for the film, because without one, the journey is hopeless.

15. What advice would you give to anyone who wants to be an animator?

Draw. With traditional animation, the secret is draftsmanship. If you can’t draw what you can imagine, then you’ll be frustrated. A close second would be to take acting classes. Act as much as you can. Understanding the characters you animate will give you the ability to express yourself in a unique way.

16. You have had a truly fascinating career: animator and puppeteer, even creating costumes for Ringling Bros. And Barnum and Bailey Circus. What was the most important lesson you took away from each experience?

To always find a way to be true to yourself. Find some connection or don’t do it.

17. What is the best unexpected compliment that you’ve gotten from a fan or otherwise?

I was touched by a newspaper story I was sent a couple of years ago. Its subject was dinner table rituals and one family spoke about how they all raised their glasses before they ate and toasted, “To the open road!” That’s a quote from A Goofy Movie, the very first film I directed. I was moved to discover that the films we make affect lives in ways I had never thought about.

18. When you’re flipping through cable channels, what movies will you always stop on – even if only to watch for a few minutes?

This is tough. I’m not much of a channel surfer. I’m the kind of guy who has to watch something from the beginning or not at all.

19. What was the best holiday present you were ever given, and why?

The present I remember to this day–I think I got it when I was four years old, is a two and a half foot tall monkey on roller skates that skated toward you when you threw a coin into its hat. I spent many years as an adult trying to find another. A few years back, my wife bought me one for Christmas–I burst into tears.

20. Do you believe in Happily Ever Afters?

I do. It’s funny to me that people are curious about my personal beliefs when it comes to this subject. I don’t think I would have been able to direct Enchanted if I didn’t.