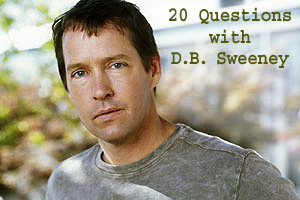 D.B. Sweeney has been around a time or two. Starting in the mid-80s, he’s racked up almost 50 credits in television and movies, making him one of those actors who turns up in nearly everything you watch on cable. From baseball player to alien abductee to hockey-player-turns-
figure-skater, D.B. has managed to avoid typecasting to become a first-rate character actor.

His most recent role was as Michael Whitman, father to a hormonally-charged teenager, and husband to a cheating wife, on ABC’s critically touted but sadly canceled drama Life As We Know It. Prior to its cancellation, D.B. took a moment to answer our 20 Questions.

1. Life as We Know It was based on Melvin Burgess’ excellent novel, Doing It. Did you pick up a copy before you started filming?

I heard a lot about the book, but didn’t get to it. I plan to before season two!

2. How is working on this show different from any other that you’ve done?

It’s really a great bunch of people. Sometimes a cast or crew may be excellent creatively, but you don’t really feel a personal connection. In this case we have both. I am extremely fond of Lisa Daar, Sean Farris and all the rest of the company. The crew is first rate as well. They’re good people.

3. Are there parts of yourself you have to turn on or off to play Michael Whitman?

It’s hard to say. I think there’s a lot of me in all my roles – that’s all you have to draw on. I think Michael is a bit more accepting of his circumstances than I am (would be).

4. During each episode, the camera focuses in on one of the three main teenage boys, letting them speak directly to the audience. If the camera zoomed in on Michael, what would we learn was going on in his head?

I think he’s a little scattershot. You’d probably hear him talk in non sequiturs about his hated job, picking up the cleaning, oh – and he has to get some milk, too. The mundane mixed in with his frustrations.

5. Michael is the father of an angst-ridden teenage son. Do kids really have a harder time growing up in today’s climate, or are we just more aware of subjects that might have been taboo before?

The vivid nature of the media, especially the Internet, is a concern. We’re giving kids too much information and imagery too soon. I’m not sure everything is protected by free speech. I think we need to look at all of this legally. It’s too unregulated.

6. While this show certainly focuses on its younger characters, it doesn’t feel like a typical teen drama. Do you think there is an age barrier attached to this show? Is it just for kids?

I think good programs are for everyone. And the Neilsen demographic studies are fiction. It’s like Oz behind the curtain…it only works because everyone has agreed to buy into it.

7. Life As We Know It has a critically-acclaimed lineage, coming from the producers of cult favorite Freaks and Geeks. When you’re taking on a new role, what – if anything – do you like to learn about a show’s creators, writers, etc.?

You sniff around, try to learn what you can, then take it with a grain of salt. You always “hear stuff” about people. Experience has taught me it’s usually lazy information and untrue. Ultimately it comes down to the script and the character. If it’s good, I don’t really care if the guy’s “got a rep.”

8. Speaking of fancy lineage, you were also in Chris Carter’s short-lived action drama Harsh Realm, which faced high expectations from X-Files fans. As an actor, did you feel a different kind of pressure working on a show that had such high up-front expectations?

Not extra expectations in a case like that, but maybe some extra excitement because the possibilities are limitless. I was disappointed the show was dumped by Fox. I loved the part and it was the kind of thing I could have seen doing for a while.

9. The beauty of a drama like Life As We Know It is that there’s a life lesson in there for everyone. Which character is going through the hardest time, and which one has blown things way out of proportion?

One’s own struggle always seems most trying. I don’t know that anyone’s is blown out of proportion.

10. Has any of the show’s brutally frank content been surprising to you? Are there scenes and topics that you were surprised made it through the censors?

11. Life As We Know It has a hip soundtrack, showcasing some of the best in indie rock today. Have you learned anything new about your own musical tastes from doing this show?

I already knew I was a little out of touch. Pop music changes so fast and so many acts are one-hit wonders that you really have to invest a lot of time to remain absolutely current. I don’t have the time.

I don’t know. Maybe Tom Cruise worries about getting typecast – him and the other five guys that actually get to CHOOSE their roles. The rest of us are doing what we can to get hired into the best situation we can find. The system does ask you to repeat commercial success. I haven’t had to worry about that much. I haven’t had any breakout hits, and that does allow me to slink around the edges and mix it up, which I think I prefer.

13. Was it a coincidence that you were cast in a series in which hockey plays a major role?

Coincidence. I resisted Cutting Edge sequels for years because I didn’t want to be defined by that, although I am very proud of that movie. Romantic comedies don’t get the respect they deserve…it’s a very difficult genre.

14. To date, you’ve had a full career. What advice would you give to your younger cast mates?

Save your money. Don’t fight “to the death” over creative differences. Be respectful to the crew. Try not to make people wait. Most of all: Enjoy it.

15. Do you have any interest in getting behind the camera as a writer or director?

16. With the proliferation of the Internet, fans are able to get pretty close to their favorite celebrities through online chat events, message board participation, etc. Has this changed the way you approach your own celebrity?

I don’t feel much like a celebrity. People recognize me in airports and so on, but it’s not like they’re screaming and pulling their hair out. I’ve been around some “pop icons” socially. I’m sure the pay’s great, but it’s tough to get through a cup of coffee in peace.

17. Fans have already launched an online “Save the Show” campaign to support Life As We Know It, even though the show has not been cancelled. Does this kind of talk make you nervous, or have you been through it enough times that you’re able to roll with the uncertainties?

I don’t worry much. I hope they keep it on. If they don’t, I’ll do other things.

18. This role will introduce you to a new generation of young fans. If you had the chance to shape how they view you as an actor, what is one past project of yours that you would want them to see?

I like Lonesome Dove, Eight Men Out, Strange Luck, The Cutting Edge…I’ve been fortunate to be in some good projects. Memphis Belle also holds up pretty well.

Spiderman. But they went with another guy. (Ha Ha) [I’d like to be] Brick in Cat on a Hot Tin Roof. Someday soon, I hope. Find me a Maggie if you can!

20. For you, what is the biggest difference between television, movies, and the stage? If you could choose to do one for the rest of your career, is there a clear winner?