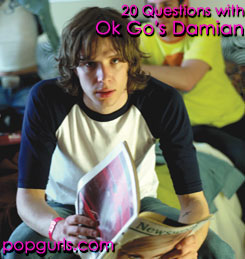 Secret agents, National Public Radio and Cheese-Whiz… OK Go’s front man, Damian Kulash, took some time off his busy schedule to do up a little 20 questions for the PopGurls.

1. Do you think a secret agent can survive with only a sassy roundhouse kick alone? What would you suggest she have in her arsenal?

For a secret agent to survive, her roundhouse kick must be anything but sassy. Sassy gets you noticed, sassy raises suspicions, sassy gets you caught. A truly exceptional secret agent must be intelligent, brave, witty, and fine-smelling. A truly exceptional secret agent must be able to blend in yet stand apart, must be fluid and translucent, must be flexible yet firm. To be successful, she must be able to commandeer any vehicle, utilize any weapon, sit through any movie. She must have gumption, and she must, above all else, be really, really persnickety.

Well, you can look at this one two ways. The obvious answer is that the relatively spry folk at PRI would waste the old fucks at NPR, where the median age is 113. But this analysis assumes that the fistfight is the kind of brawl that clears the benches and gets all the employees involved. I suspect, given the urbanity, civility, and wimpitude of public radio folk in general, that they’d wind up arranging some more limited battle in which their best combatants could stand in for the lot. Were that the case, the larger staff of NPR might give them an advantage – more people to choose from.

You know, not too long ago I was involved in a semi-physical contest between, more or less, those two groups. At the time I was an employee of NPR, and OK Go, bolstered by the support of some other NPR employees, challenged the staff of This American Life (PRI) to a whirlyball match. Whirlyball is a roughly basketball-like game played with those little plastic wiffle-ball scoops, a fleet of bumper cars, and a fair amount of beer. Needless to say, we wasted those nerds. It was more a triumph for OK Go than for NPR, and it was not exactly a fist fight, but it seems apropos.

3. Do you practice any choreography for your shows? What *NSYNC move would you love to add to your repetoire?

*NSYNC moves are far too subtle for us. If you rent Best Of TRL videos with intent to steal their moves (which we have done), you will be sadly disappointed (which we were) when you realize that all they really do is make small, precisely-synchronized (in synch, if you will) movements. Mostly with their hands, and mostly in circles. When we choreograph we like to swing for the fences a little more. Human pyramids, sliding through one another’s legs, riding each other like horses – we find these moves require less training or practice, and are more exciting to behold.

A couple years ago we arranged a pretty involved dance routine along these lines for our song “C-C-C-Cinnamon Lips.” It was first choreographed for our performance on Chic-A-Go-Go, a public access, open invitation, all-ages, Soul Train-style dance show here in Chicago. The show encourages attendance by anyone who feels like dancing – our audience that day included little old Pakistani ladies, people in full monkey suits, a bunch of little kids, and a young-Castro-looking guy who just stood expressionless in the middle of the floor with his arms crossed, which apparently constituted dancing for him. If you’re curious, the performance is available on VHS tape from our website, http://www.okgo.net.

Several months later, the same dance got us a standing ovation from a sold out house at the famous Town Hall Theater, on Broadway. To date, I think that might have been the most exciting moment in our rock lives. And I actually melted a hole in the knees of my polyester pants while sliding through Tim’s legs on my knees. *NSYNC only get holes in their clothes when their stylists put them there.

Ahhh. A wonderful question. Actually, Cheese Whiz comes in a jar, not a can. And as wonderful as it is, we far, far, far prefer Easy Cheese, which DOES come in a can. The two products were long time rivals (the “whiz” is sold as a sauce, while our hero is technically a spread), but now that Kraft and Nabisco are part of the same corporate family, perhaps we will finally see peace for processed cheeses everywhere. To answer your question… Cheese Whiz: No disaster, but not exactly Easy Cheese, either.

5. If lunacy is everything you need, what would be five things you’d like to have around just in case you’re wrong?

Treacherous enemy. They’re supposed to be that way, enemies.

8. Were you a Pippi Longstocking fan? Did you wear red tights on your head and pretend you had long braids like Pippi? (Not that Amy did anything like that. Nope.)

Yes, I liked Pippi Longstocking, but I did not wear tights on my head. Most of the imaginary games I played as kid were directed by my older sister, who usually had me play incidental characters with little or no agency whatsoever. For instance, I spent many hours as the lucky passenger in the time machine/closet, and was the only recipient of communion wafers/wheat thins after her sermon in the kitchen.

9. What is your ideal bedazzled item? Would it say anything, or just be sassy and sparkly?

No more sassy. As explained in the first question, sassy is just plain dangerous.

My favorite bedazzled thing is a stunning XFL t-shirt manufactured, owned, and carefully operated by my friend KWAN-L. Little is more amusing than such respect paid to such a flabbergasting corporate failure. He spent the better part of a week perfecting that thing.

Never watched Road Rules, so I can’t really compare. We like them both because they use a lot of our music in the background… I get pretty regular reports of friends dropping their food when they hear us tucked behind a ridiculous argument between a couple vacuous wannabe actors posing as normal people.

11. What girlie drink do you secretly (or not so secretly) love?

12. Have you ever written a fan letter? Was it to Blair or Jo on The Facts of Life? Or perhaps David Hasselhoff because he had such a cool car?

One time I hot-rodded a little wind-up toy van and sent it to the band Cake Like, who had had their real van stolen. The band was pretty cool, but I should also admit that the lead singer, Nina, was dating my ultimate rock idol, Craig Wedren, singer for Shudder To Think. They were finest band I’ve ever seen play, I think… So the fan letter was really more a spin-off of my obsession with them.

13. What word would you like to make into the newest pop culture phenomenon?

14. Barbies: Creepy minions of the underworld or sassy dressers we should all try to emulate?

Pretty creepy. A few years ago a group called the Barbie Liberation Organization switched the voice boxes of talking Barbies and talking G.I. Joes, and placed them back onto store shelves. The result was that every now and again some poor parent would buy their poor child a talking Barbie that said things like “Dead men tell no tales” in a really gruff voice. That’s the kind of creepy minion I can get behind.

15. Do you have any unusual talents? What are they?

I can fly. I can transmogrify. I can turn invisible. I am an excellent trainer of excellent dogs. I make good soup. I can blow up to an enormous size when startled. I am malleable.

16. You are enlisted to write a jingle for those teeth-whitening strips. You are instructed to make them fun, sassy and exciting. How the hell do you do that?

17. Spencer Tracy or Winston Churchill – who would you rather have dinner with?

Terrence Mann. Tall, gaunt, evil, and loud. Give that show a little life, you know what I mean?