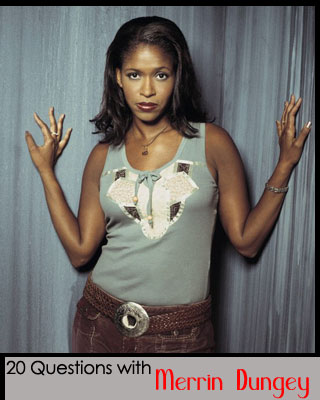 From playing a psychotically smothering mother on Malcolm in the Middle to an evil twin on Alias, Merrin Dungey’s pretty much done it all. Fresh from her work on the new Spelling drama, Summerland, Merrin takes some time out of her busy schedule to talk kissing, clothing and how to hook up with her backstage at a gig.

1. What was the most difficult thing about writing your one-woman show? What would you recommend for other people starting their own?

Being that honest in front of so many people was really hard. That’s why I soon took seven minutes of that material and started doing standup with it.

As for other people doing one-person shows, please have a specific and different point of view, not just, “Oh, this is what happened to me on the way to becoming an actor.” No shit, we all have stories. Yours better be interesting, or weird or funny if you think you should share it with the world. Mine was called “Black Like Who?” and was about growing up black in a white suburb. And believe me, the journey of a black girl who had to hide her Valley Girl accent and love of Duran Duran, and learn to be “black” to make it in Hollywood, has some good yuks in it, if not for the slide show of my prom pictures alone.

2. You were the youngest person to ever win the UCLA School of Theater’s top acting prize, but what prize do you really, really want to win?

3. You’re heading out on a cross-country trip. What songs make it on your essential travelin’ mix cd?

Great question as I am ipoding right now. Okay, so here goes: Madonna “Into the Groove” or “Holiday,” Duran Duran “Careless Memories,” Phantom Planet “Big Brat,” Modest Mouse “Float On,” U2 “Bad” and “Beautiful Day” or even “Hawkmoon 269,” ELO “Last Train to London,” blink 182 “Down,” Liz Phair “Why Can’t I?” or anything from Exile in Guyville, Rolling Stones “She Was Hot,” J-Kwon “Tipsy,” Bjork “Hyper-ballad,” and Dolly Parton “Here You Come Again.” Oh, and of course, Olivia Newton John “Xanadu.” I could go on forever. I love music.

4. You’ve nabbed roles on shows on the main four networks. Who has the best catering? The best bathrooms? Have you thought of learning Spanish so you can take over Telemundo next?

Summerland has the best catering for sure. Alias had good bathrooms, studio wise. I am learning French right now, but I don’t know how that’s going to help me. Le herrison est rapide. The hedgehog is fast.

5. Grosse Pointe was a brilliant sardonic parody of the teen angst show. What show genre would you love to see parodied now, and how would you propose to do it?

I want to make fun of spy shows now. Then I could kick more ass.

6. You get to be rock star for a day. What band would you play with, and what would the groupies have to say to score some backstage time with you?

I have a band, actually, named Bad Francie and we sing 80’s hard rock covers. I sing and play a cherry red electric guitar and do a mean version of “Highway to Hell,” if I say so myself. As for groupies, I am a Leo so I am pretty easy. Flattery will get you everywhere. Whore.

7. Would you respect a man who ordered a “Sex on the Beach” or a Piña Colada on your first date? Seriously? What makes a good impression on you?

I would be impressed by a guy who sang the lyrics to “Escape (The Pina Colada Song)” to me. Or better, acted it out, you know, taking me to a bar called O’Malley’s, writing a personal ad directed at me, etc. Hello? Do you get it? Is this thing on?

8. Whose ass on Alias did you like kicking the most? Were you tempted to kick JJ’s after two years of bouillabaisse and five-second cameos? And are you putting that year of training in ass-kicking to use?

Jen and I had an absolute blast, I will kick her ass any day. Word. Why would I kick the ass of the man who gave me the most spectacular role of my career thus far? HELLO! I played an evil twin! Is that, or is that not the dream part?

Oh, and as for training, I still see Sensei Benny the Jet and work with him. In fact, I think I worked harder for my part on Summerland than for Alias. Francie/Allison wasn’t in no bikinis. EVERY day I’m on the beach here playing volleyball, wearing next to nothing. Great.

9. You got your smooch on with several fine boys on Alias. Who was the most memorable? Got any juicy stories to spill?

Bradley [Cooper, who plays Will] was an awesome kisser. It was weird though, because we had been friends for so long at that point, that we had a glass of wine before we did the scene to mellow out. Crazy.

David [Anders, who plays Sark] is also quite good. (Very gentle, ladies. Soft lips.) But, I had to encourage him to go for it, because he was such good friends with the boyfriend I had at the time. I think he thought he might get his ass kicked.

10. We feel that both of your characters on Alias were shafted where storylines were involved. Tell us what should have happened to your characters. (For example, should Francie have been allowed finally to name her restaurant? Should Allison’s history have been explored? Or should she have spent more time attached to Sark’s face?)

The set designer and I secretly named the restaurant Deep Inside. Trivia! Anyway, I would have loved to explore who Allison was, and I would have loved to see Sydney and her have to work together at some point because they HAD to, you know. I thought that might be interesting. I did like Allison and Sark being the anti-Syd and Vaughn, but the show is not called Allison’s Story. Do I smell a spin-off?

11. We tend to find ourselves planning elaborate escapes for any situation we’re in. (For example, eiddy had a really fantastic escape from the dentist’s chair that involved flips and wielding their own weapons against them that she’s kind of sad she never got to put into action.) Do you do this? And if so, what was your greatest escape?

I don’t think up escapes, but I do mentally plan attacks in my head if I think someone might be following me, like in the mall parking garage. Like, I’ll think, “Okay I’ll do a spin back elbow and then drop and do a dragon sweep and then step on his neck.” Thanks, Sensei!

12. Which is a worse breach of etiquette on the dance floor: A strange man using you like his personal stripper pole without even introducing himself or someone bumping into you and spilling your drink? What do you do with people who don’t understand the concept of personal space?

God knows I hate a close talker. I hate the drink thing though, but ladies, please, martinis and cosmos only at the table. Learn from your past mistakes. I did once have a guy come on to me when I was a cocktail waitress, but then he got really weird and BIT the arm that was holding my tray. He got his ass kicked by a lot of people that night.

13. We’re carb addicts. We’re proud of this. Potatoes are our drug. But we need a new kind of fix – would you happen to have a favorite potato recipe to share? Or perhaps a new (safe, yet not necessarily all that healthy) addiction to pursue?

I hate regular white potatoes, myself. Love yams and sweet potatoes and they are a lot healthier. Like, sweet potato chips? Yum! But ice cream is my secret sin. I have a lot of bullshit Wow Cow nonfat yogurt to fill that urge.

14. Buffy had Mr. Pointy, Linus had his blanket, eiddy has her old Cabbage Patch doll (which creeps the hell out of her fiancé, by the way). What’s your security blanket?

My cats Casey and Sandy. And Barnaby my old teddy bear (named after Barnaby Jones, my favorite TV show when I was six).

15. Every show seems to have a line of dolls now. If you could have three character dolls, which would they be and what would be their special trick?

Well JJ had Alias dolls made for us this Xmas, and apparently Allison’s special trick was having an ass bigger than everyone else. He profusely apologized.

I’d love to have a Susannah (Summerland) doll, with special fun Barbie-like outfits (I have a great wardrobe on this show). She would also talk really fast (she’s like the Seth Cohen of Summerland). I would also love a Grosse Pointe doll. She would give you backhanded compliments.

No question, it would be “Proud to be Black” by Run DMC.

17. Do you consider yourself fairly internet-friendly? What sites do you visit on a regular basis?

I Google lots of things. I go to Daily Candy shopping sites. Sometimes I check out Vince Vaughn’s site but just for the articles…!

18. Name one moment when you looked around, breathed happily and knew you were content.

It’s funny, it happened twice this week. Once was tonight, with my favorite take out sushi, my fro-yo, my cats and The Sopranos in my very own house. I also felt that way this week at work on Summerland. I thought, wow, I am really happy here and love all these people I work with. I am very lucky.

19. How is Summerland different from the other series you’ve worked on? Is there something special they pump into the air of Aaron Spelling shows?

It’s much harder work than I have ever done because I have much more responsibility here. But, like I said, I am very happy and relaxed because of this cast and crew. Really great people, and I think that might be his secret. He hires wonderful people. Also there are some REALLY hot guys on the show who never wear shirts. Yum. Yum.