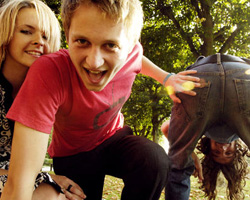 When we saw The Subways live several months ago they were the featured act during the Brit Pop night at one of my favorite clubs – the kind of place where the stage is practically sitting on the floor, and the space is so intimate it’s like having a concert in your parents’ basement. This band sounds so tight that when they started playing it was impossible to distinguish them from the music being played by the DJ. The crowd kept right on grooving until the realization that the band had taken the stage trickled all the way to the back.

Thus began the mad rush forward, an entire crowd jumping up and down and grinning at each other like maniacs. For that entire set The Subways kicked out fantastic rock and rolls tunes with an almost frenetic energy. With Billy Lunn (20) on guitar and vocals, Charlotte Cooper (19) on bass and vocals, and Josh Morgan (19) on drums, this group of youngsters from the UK have made a name for themselves putting on a kick-ass live show and we’re happy to confirm that the reputation isn’t unfounded.

Though nothing beats live music, the band has managed to put together a debut album, Young For Eternity, that manages to capture some of the same spirit. The first single, “Rock and Roll Queen,” is already a staple on indie rock stations throughout the U.S. Just before the album’s Valentine’s Day release, Billy and Charlotte (who are real-life sweethearts) played a rousing game of 20 Questions with us.

Billy: I loved getting depressed to Nirvana. Those were the best days of my life.

2. For American artists, performing on David Letterman is the moment they know they’ve made it. Looks like you’ve already got that scheduled. What’s the UK equivalent for you?

Billy: There’s a very funny guy called Jonathon Ross who gets up-and-coming bands to go on his show, but he’s no Letterman. He’s got floppy hair and a MASSIVE smile.

3. Which would you rather see – a crowd jumping up and down, ricocheting off each other, or a more subdued crowd that knows all the words to your songs and sings along?

4. You’ve played in front of huge sold-out crowds, and also in tiny, dim clubs. If you were able to put together your dream tour, which would you choose? Would you mix it up?

Charlotte: I think what we are doing at the moment is a great mix of gigs. We are playing quite large headlining shows in the UK, about 1000-2000 people. In the countries we are visiting [for the first time] we are playing small clubs, and we are also doing some huge support shows with bands like Oasis. It’s great to be doing a mix of all of these different shows, because we need to plan for each show differently and get to play different kinds of sets.

5. Do you find yourselves getting into ruts when you spend so much time on the road? Listening to the same albums in the tour van? Eating the same foods over and over? Wearing the same t-shirt three days in a row?

Charlotte: We always make sure that we have a fresh supply of books and films on the road… I think that we buy too many, there’s no space for anything else on the bus! But we do have our favourites like Family Guy, The Simpsons and Alan Partridge. We get into a touring routine, but I don’t think that we ever feel that we are in a rut. We live to see and experience different places each day.

6. What’s something at home that you miss when you’re away?

Charlotte: The main thing I miss when I’m away are my friends and family. Whenever we are back I spend most of my time in the local pub with my girlfriends. Other than that I miss my cats and my piano!

7. When was the last time you went to a show where you weren’t on the bill?

Charlotte: We are in the middle of the Big Day Out tour at the moment, which is fantastic not just for the festival, but also there are a lot of side shows going on too. We went to see Mudvayne in Sydney. It was amazing. They have the most dedicated and loyal fan base I’ve ever seen; the whole crowd was singing all the words and going crazy.

8. Do you have any superstitions or rituals before you go on stage?

Charlotte: The only ritual we really have before going onstage is making sure that we get a good meal! We all need to do different things each day before we go on depending on how we are feeling.

9. “Rock & Roll Queen” has done a nice job paving the way for your new album. When Young for Eternity arrives in stores, what’s the song you secretly hope everyone will crank up in their cars and sing along with at full volume?

Charlotte: I’d like to think of people playing “Somewhere” full volume with the windows down. That would be very cool to hear!

10. What’s one thing you learned while recording this album that you’ll make sure to apply when you record the next?

Charlotte: I think from the first album we mainly learnt how to be confident in the studio, and to not be afraid to try out new ideas that we wouldn’t normally consider. I think we also have gotten better at listening to our own songs, and deciding how we want them to come across on record.

11. What did it feel like the first time you held a copy of Young for Eternity, all wrapped in plastic and official looking?

Charlotte: It felt amazing to finally have recorded an album. We had been building up to it for over four years, and so to have the finished product was very gratifying. We were also very excited to get it out to our fans who had been following us for a while, and also quite nervous to see what they would think of it.

12. Everyone in the band is pretty much (literally) family. What role – in terms of personality – does each member play? Is it hard to spend that much time around people who know you so well?

Charlotte: I think we all change our roles each day, there’s no real set in stone position we all have. We have learnt how to be a band together right from the start, so we are very comfortable playing together, and I couldn’t imagine playing with anyone else. However, of course, sometimes it can get quite intense on the road. But playing every night to enthusiastic crowds outweighs anything negative going on.

13. You’ve whole-heartedly embraced the Internet as a way to promote the band. How successful do you think your online fans have been in garnering support for the band?

Charlotte: The most important thing the Internet has helped us to do is to create a community. It’s great to see people from Scotland meeting up with people from London, to see that people in Australia are interacting with people in Germany, over a shared love of music. There are more people joining each day, telling their friends about us, and joining The Subways family.

14. In addition to using the ‘net for work, are there sites you visit regularly? Bloggers or other online personalities of which you are a fan?

Charlotte: I’m a big fan of fashion sites. I look at my favourite designers’ sites whenever I get some free time. It’s window shopping from your house!

15. You seem to be cool with fans taping and video recording your live shows…and then sharing with anyone who wants a copy. Was there ever a moment when you felt protective of your music and thought about being more restrictive?

Billy: We believe that music is a right, not a privilege, so we are fond of the idea that fans want to actually share our music with people all over the world. Most of the bands we are into were discovered through downloading, and I suppose we feel it’s important to have that right to listen to music when you want. But we also felt it important that we support the bands by buying albums as well as downloading. We hope people will do the same, but it is a nice feeling knowing that people want to know about us through downloading.

16. What bands are you listening to right now? Is there a band you love that isn’t getting enough attention?

Charlotte: There’s a new band called Milk Teeth who I think are amazing. They have a great quirky pop sound. I’m also just getting into Sonic Youth and The Dandy Warhols at the moment.

17. What is the most embarrassing song on your iPod?

Charlotte: I’m proud of all the songs on my iPod, Britney Spears included!

18. When you meet someone for the first time, and they ask you what you do for a living, what do you say? Is there ever a moment when you think about telling them something else?

Charlotte: I just say that I’m in a band if people ask. It’s not something that I really want to make known when I first meet people, but if they ask I won’t lie.

Charlotte: We just want people to enjoy the music, whether that be through our live shows or listening to the album. Critical acclaim and awards are a bonus, and can only help to expose us to more people. It’s the people that matter.

20. If your flat were to catch on fire, what’s the first thing you’d grab on your way out of the building?

Charlotte: Billy and my cats!

Billy: Whatever book I’m reading at that time and maybe a nice warm pair of socks.