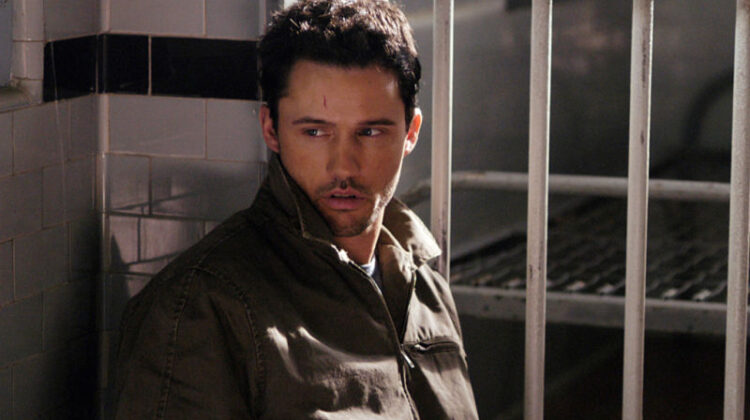 Jeffrey Donovan commands your attention. It’s near impossible to take your eyes off him when he’s onscreen, which only feeds the intensity that he’s brought to his role as Detective David Creegan on USA’s Touching Evil. After finishing New York University’s Graduate Acting Program, he spent several years on Broadway and off-Broadway stages before heading off to LA for new challenges in television and film.

Now Jeffrey’s completed his latest challenge – a little thing called PopGurls 20 Questions – and proves that he’s more than the latest smoldering sex symbol (but he’s still that, too).

1. The pedigree for the Touching Evil pilot is pretty darn impressive. Executive produced by Bruce Willis and Arnold Rifkin, as well as the Hughes brothers (Menace II Society, From Hell). Allen Hughes also directed the pilot. Did you have a sense that the project was going to be so remarkable?

The first time I read the script I knew this would be something very special. I had never read anything quite like this for TV. And when they were foolish to entrust me with the role – I knew they were as crazy as I was.

2. Your character, Creegan, has said that he doesn’t have a sense of shame. If you could spend a day without any inhibitions – what would you do? Or would you rather rid yourself of another sense for 24 hours?

Creegan has actually had a remarkable impact on my life. I was somewhat shy before I played the role for five months. Now, I feel I can do and say anything. I ‘m now walking up to anybody with absolutely no fear. It’s quite liberating. It actually helps me socially… you know, with the ladies.

3. For the episode “Y Me,” you stayed awake for 48 hours straight. What did you do to keep yourself awake? Did you ever reach a point where you felt that, say, 42 hours were good enough, but you were caught up in a great Playstation game?

I had never stayed up that long for a role. I had some insomnia during shooting because of all the pressure I put on myself anyway. But I just kept reading and playing Xbox. It’s safe to say I can beat anyone at Tiger Woods Golf, even Tiger.

4. What has been your favorite Creegan line to date?

That’s a tough one. Some lines were scripted and some were just ad-libs at the last second. I guess I’d have to say: “Custodial Carl is as clean as his crappers” (from the finale).

5. There seems to be more than a few hints of something potential to come between Creegan and Branca, but we think that you and Bradley Cooper, who plays Agent Mark Rivers, have great chemistry. Any chance of your characters hooking up?

Ummï¿½ I don’t think TV is ready for Rivers and Creegan hooking up. Interesting, though.

As far as Creegan and Branca – for them to hook up would be like Gilligan getting off the island. Once that happens what’s the point in watching anymore? Plus Creegan needs to run around with some other girls first.

6. You’ve said that your scenes with Pruitt Taylor Vince (Cyril) can be quite magical. What’s one scene that you had that didn’t make it to the screen that really knocked you back and made you say, “wow”?

Everything we’ve ever shot has always made the screen. USA Network knows they have a gold mine in Pruitt Taylor Vince and they show him as much as they can. I’m in awe of this kid’s ability. Truly blessed to have him on the show.

8. Have any guilty pleasure TV shows that you can’t miss, or perhaps a movie that you have seen far more times than you’ve ever admitted to anyone?

Believe it or not, I don’t own a TV. Crazy huh? I’m not a big movie-goer either. I just feel like I’m watching work. I am always outside and couldn’t care less about what’s on TV these days.

9. Do you consider yourself Internet-friendly? What are your favorite websites?

10. What have you found to be your biggest challenge between performing live on stage, and creating a role on film?

The price you pay physically. On stage for five months for three hours a night is nothing compared to playing Creegan 14 hours a day for five months. Keeping up with a television pace is the hardest job in showbiz.

11. As an east coast fellow, what was the first thing that happened when you got to LA to make you think, “Whoa, Toto, we’re not in Kansas anymore…”

I was stuck up at gun point and robbed in broad daylight. Not fun. Big lesson, never cash a check ever …ever….ever. Just deposit that change and run!

12. What five cds would you recommend that everyone take a listen to?

13. If you could jump in a time machine and relive a certain moment of your life, which would it be?

I wouldn’t. I’d blow the damn thing up.

14. Was it intimidating coming onto an established show like The Pretender to play Jarod’s brother, Kyle – a character that the fans had such expectations about?

No. I’d never seen the show because I don’t have a TV. So most of the time when TV scripts come my way it’s like brand new material; I can completely immerse myself in and not judge it.

15. Do you have a role that you’ve always wanted to play – so much so that you’re willing to wait until you have the perfect setting/cast/time to do it?

I’d love to play the turn-of-the-century boxer, Jack Dempsey. We look a lot alike, and I’ve written a script about him.

16. Potatoes are not only the world’s most perfect food, but are a friend to the starving artist: cheap, tasty, comfort food. What’s your favorite potato recipe?

I got picked up last night. This very pretty girl walks right up to me and says, “What’s your nameï¿½ You’re HOT!”

18. Do you have a litmus test when you meet someone new?

I try to ask her something personal without being rude. If she rolls with it and doesn’t try to hide I know she’s secure enough to go out with me. I can’t stand insecurity in girls. I love strong, confident women.

19. What was the best holiday present you were ever given, and why?

A BMX bike with killer wheels [when I was] 13 years old.

I was in love with it since the day I saw it in the showroom window.

I’ve sold the biggest lie in town: that I’m a really hot actor at the moment and I’m going to ride this image as long as I can.