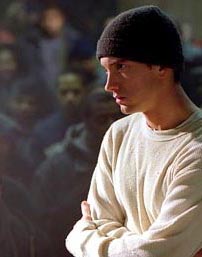 Sometimes I feel like I’m the only person who doesn’t think 8 Mile is Phenomenal! Amazing! Brilliant! I’ve read all these descriptions and more, all praising the flick to high heaven, and I’ve yet to figure out why. Because, honestly, I was kinda bored. Thank goodness I had my brother with me to confirm my issues, or I might be convinced that I saw a completely different film than the rest of the country.

But he was there, and our immediate impressions were as such: “I was expecting something different. It wasn’t bad. It just. I thought it would be better.”

The thing is, I really wanted to like 8 Mile. I was anticipating it for months – marking down a movie release date for the first time in years. I had really enjoyed Eminem’s last album immensely. Perhaps my problem is that I approached it almost as if I was watching a film adaptation of a book I’d read. It’s been touted all over as a slightly reworked version of Eminem’s life, this time around as seen through the eyes of Jimmy/Bunny Rabbit. Hence, my mental images of most of the characters in his life, especially his mother (Kim Basinger) and girlfriend (Crossroads’ Taryn Manning), were already fairly well-etched. Neither of whom even came close to my imagination. I was waiting for screaming brawls and furious ire – something that made me feel Rabbit’s desperate need to get away from them and show them that he was better than what they thought of him. Instead, I got an annoying, pathetic mother and a barely-there girlfriend. Kim Basinger was terribly miscast, and I am just thankful that I didn’t have to hear more than a few minutes of Manning’s grating whine.

Or maybe, like other ambitious singer forays into film, it tried to do too much. Out of the gate, we see Rabbit bombing his chance at a battle (a verbal freestyle competition where rappers have a set amount of time to, basically, rip each other to shreds for the entertainment of a highly opinionated audience), find out he just broke up with his girlfriend wherein he moved out and gave her their car, watch him move back home with his alcoholic mother, Stephanie, and little sister. Stephanie is currently fucking some guy barely a year or two above Rabbit in school. A guy who, apparently, is awaiting a big lawsuit paycheck, which Stephanie is banking on to get them out of the trailer park. Then he’s late to work because the car Stephanie gave him was broken and his boss is threatening to fire him. Of course, there’s a love interest, an ambitious little one named Alex (Brittany Murphy), who comes in and shakes his world up for a bit. And let’s not forget his friends – some decent ones (Future, Sol, Cheddar Bob) and a shady one (Wink): Rabbit’s got to learn which to walk with and which to walk from.

All of this, my friends, happens in the course of one week.

Now, I know I’m a bit of a slacker but, damn. There’s a lot that they pack into one week in Detroit, even in 1995. There were a lot of 8 Mile/Saturday Night Fever comparisons – but I’m pretty sure that they gave Tony Manero some time to hone his craft and sorta get his life together. 8 Mile barely gives Rabbit enough time to take a breath before the next big drama erupts.

One of the big dramas being Alex. When I first walked out, I didn’t see the point of her character whatsoever. There’s nothing to her, no reason for her actions except that she sees Rabbit as the next big thing and wants a piece of him. But I’m not even sure if that’s it. And she keeps saying these cryptic things about how he’s going to make it, which come off as either a druggie’s hazy mumblings or a 1-900 psychic line prediction. However, on further consideration, I think she serves as an example of what Rabbit could become if he took Wink up on his offer to make a demo and got sucked into the world of shady business.

Alex does what she thinks she has to do to get ahead – particularly sex. I’m very torn about the scene in the factory, where Rabbit and Alex find new ways to enjoy a lunch break. It’s obvious what she has in mind when she asks him about somewhere more private, and he’s a willing participant – but as it goes on, it feels as if he’s more in it for the emotion while she’s doing it to do it. But, since the script never quite delves into her motivation, we don’t know if it’s to get something from Rabbit, to get power over Rabbit, or just for a quick fuck.

(Also, while I’m still disturbed at the length of said scene, I can just hear Mr. Mathers’ protests about his prowess, and how he lasts for more than a minute. But, Alex licking her hand. No. Ew. I fear that the six-year-olds in the row in front of me may have been emotionally scarred. I still kinda am. Then again, I managed to block out the Saturday Night Fever de-virginizing scene when I was four.)

My love of Eminem’s music comes from the sheer approachability of it – it’s less about ho’s and Cristal and more about being in the same shit every day and having to draw upon your own strength to get out of it. The best parts of 8 Mile are when the script stops trying to put another twist in, and just lets boys be boys. Watching the guys drive around, talk, discuss both stupid and important things: Seeing them egg each other on in their dream to get big and move on from the desolation they live in, even if, deep down, they know they’re probably not going anywhere. But instead of letting the dreariness overwhelm them, the guys spend each day as if the next will be better. And sometimes, they even do things to ensure it will be.

The pinnacle of 8 Mile is the battle scene at the end. It’s so gorgeous and intoxicating that it made me sad more of the film couldn’t have been infused with such energy. I loved it with such a passion that I could not stop moving in my seat. The beats, the raps, the back-and-forth sucks you in and spins you around with this whirlwindy speed, and you love every single minute of it. The fact that Rabbit takes the events of his own life – whole embarrassing gory lot of it – and spins it around before his archrival, Papa Doc, can use it against him is simply the icing on the cake.

In that scene, Eminem reiterates the way he’s put his life on display, reminding his fans that the only person who can hurt you is you. Throughout the film, Eminem compels you – almost dares you – to look away, but you can’t. You walk out remembering not the crappy, predictable script and poor acting by some of the supporting cast, but the striking young man who rocked the house and left to go back to work. Because, in the end, we all have to go back to work.

I still don’t think 8 Mile is amazing, brilliant or phenomenal. But I’ll probably get the DVD for that last scene, and the reminder that, even when I’m going back to work, I’ll eventually get to rock the house.