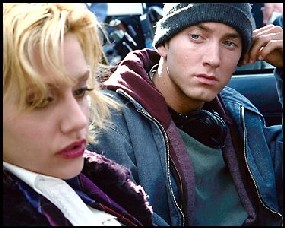 I just saw 8 Mile, and I’m not sure if it had a plot or meaningful dialogue, but the lead character was played by some skinny white boy named Eminem.

And that’s how I’m going to play this review – like I don’t know people protest his hateful lyrics, like I don’t know about concealed weapons charges, like I know nothing about his rage-filled public persona – because none of that matters when you’re talking about what Eminem can do on the big screen.

I walked out of the theater 15 minutes ago, and I can still feel his blue eyes on the back of my head, blinking slowly with long lashes, staring at me with an unspoken dare to write a bad review. Which I couldn’t do even if I wanted to.

8 Mile is about a poor white kid with the unfortunate nickname of Bunny Rabbit, who is so used to being kicked down that he can’t find the motivation to get back up again. He’s got the whole ‘life sucks’ package: out-of-work alcoholic mother, trailer park eviction, shitty job, opportunistic would-be girlfriend, broken ego. Rabbit lives it all through Eminem’s eyes, so hungry for something good that even tiny victories feel like gold at the end of the rainbow.

Brittany Murphy plays Alex, a character who isn’t fleshed out enough to earn the moniker “love interest,” regardless of the quick fuck she shares with Rabbit in the bowels of the stamping plant where he works. Does she pursue him because she’s intrigued by his talent? Is she a groupie, looking to score with the next big thing? Is she hoping he’ll be her ticket out of Detroit? Any of these things could be true, but neither the script nor Murphy’s performance make it clear which one we are to believe.

Somehow 8 Mile still manages to come out fully cooked. Hanson captured the gritty streets of Detroit with all the ugliness and violence some of us only read about in the news. Eminem managed to create a character who is at once tender and violent, invested in life and wondering what the hell he’s supposed to do next. Conventional wisdom says that he’s just playing himself, embellishing a mostly-autobiographical role. If that’s true, then people are going to have to rethink the way they see him.