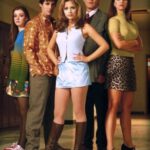 It seems like it was yesterday when I wrote up a little thing for the 14th anniversary for the Buffy the Vampire Slayer premiere, and now we're on the 15th anniversary. And today, I'm pondering this day as I work on the Joss Whedon biography that I'm writing. So strange to think of how much Buffy has affected my life, and the lives of the people around me -- and all for the … END_OF_DOCUMENT_TOKEN_TO_BE_REPLACED 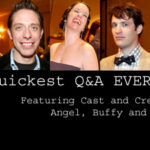 A week after the WB network announced that it would not renew the show Angel for another season, hundreds of fans of the series turned out in Los Angeles to attend the Wolfram & Hart Annual Review. The event - a fundraiser that raised $18,000 for the Al Wooten Junior Heritage Foundation - also attracted cast and crew from Angel, Buffy the Vampire Slayer and Joss Whedon's … END_OF_DOCUMENT_TOKEN_TO_BE_REPLACED 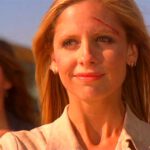 How did we feel about Buffy the Vampire Slayer at the very end? In a word: Underwhelmed. Melynee: And in a surprising turn of events, I was pleasantly surprised by the End o'Buffy. One of the best side-effects (aside from making me miss my academic-paper-writing days--what's up with that?) of writing our series-end collection of articles here at popgurls may be that I went … END_OF_DOCUMENT_TOKEN_TO_BE_REPLACED 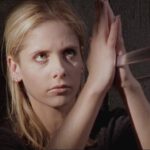 Here's the deal: we each picked our favorite ten episodes/moments/storylines/characters/what-have-you over the seven seasons Buffy the Vampire Slayer has been on the air. We combined our lists, noted the overlaps, briefly contemplated a complex, mathematically-weighted scoring system designed to determine once and for all the World's!Best!BuffyMoment, and eventually asked … END_OF_DOCUMENT_TOKEN_TO_BE_REPLACED 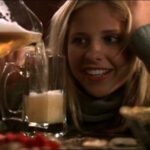 Y'know how there's that stuff that makes watching Buffy the Vampire Slayer worthwhile? This is really and truly not it. Just like our Best of... List, The 31 or so Things About Buffy That Make Us Want to Hurl are presented to you with no regard for order whatsoever. "Nightmares" (S1) Amanda: This episode sticks out as particularly bad, because it's the one episode I initially … END_OF_DOCUMENT_TOKEN_TO_BE_REPLACED