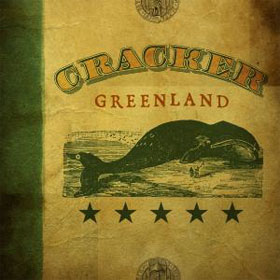 Anyone who remembers when alternative really meant alternative, they certainly know Camper Van Beethoven. They were a mainstay on MTV’s 120 Minutes with videos for “Pictures of Matchstick Men,” “Eye of Fatima Pt. II” and, of course, “Take the Skinheads Bowling.” Their self-described “surrealist absurdist folk” gave way to straight-forward rock when the band disbanded in 1990, and singer David Lowery formed Cracker with Johnny Hickman. A bit more accessible than Camper, Cracker is much more alt-country than classic alternative but easily appeals to and satisfies fans of both genres.

Now, 13 years later, Cracker’s new release, Greenland, is the first album of new material since 2002’s Forever. There’s been a bit of compilations and live recordings in between, including the infamous dueling Cracker’s greatest hits albums that came out earlier this year. While such time between new songs is frustrating, Greenland makes it well worth the wait. It’s a bit of a departure from their other albums, a bit darker, but I always found the most striking thing about Lowery’s lyrics is the beauty in the melancholy. And there’s a lot of melancholy on the CD – kicking off with a cover of American Minor’s “Something You Ain’t Got,” that was unquestionably meant to be a Cracker song with lyrics like, Well the first dance cost me a quarter and the second dance cost me my heart. Makes you want to lift your drink to the band on stage in the corner of a dive bar and toss ’em a few dollars because you’ve been there before and you know you’ll be there again.

The mood continues with “Maggie,” (You’re everything I wanted, but I’m half of what you need), “Fluffy Lucy” and the heartbreaking and stunning “Night Falls.” Lyrics like, I see you there, my heart cannot contain this misery, it comes right out of my mouth like butterflies give me chills whenever I hear them.

Admittedly, the more prog rock songs like “Riverside” and “Minotaur” took a while to grow on me but now I can’t wait to see them performed live. One of the few more cheerful songs is “Everybody Gets One For Free.” For anyone who’s followed the goings on of Camper and Cracker in the past few years, it shows that they haven’t lost their sense of humor no matter what hell they’re dragged through.

“Darling, We’re Out of Time” closes the album, much like a weathered old bartender closing up shop for the night. He drinks down one more beer with his favorite customers, knowing the day is over and he can’t get it back, but tomorrow starts anew and there is comfort in that.

Lowery said that the songs chosen from the multitude written were “the ones about endings and new beginnings and loss.” Some will certainly break your heart, but in the end, the feeling when you’re in it is so good that you’re willing to go through the pain over and over again. It’s hard to pick favorites as they change every time I listen to the CD. The catchy “Where Have Those Days Gone” and “I Need Better Friends” were quickly fast-tracked to the top of the list, and on many occasions I’ve put “Something You Ain’t Got” and “Darling We’re Out of Time” on repeat. “Fluffy Lucy” got stuck in my head the other night and I was happily humming away for hours. I stop every time “Night Falls” comes up, getting lost in the lyrics, knee-deep in emotion. Even now, playing Greenland as I type, I find new things I love and keep thinking of people I need to share this with because I’m sure they’ll love it too.

Pick up Greenland, then check out the rest of Cracker and Camper Van Beethoven. I promise that you’ll be wondering where these bands have been all your life.