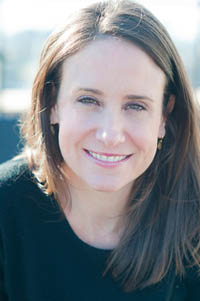 I picked up If Andy Warhol Had a Girlfriend on a whim last year when I was in the midst of a “I’m so over Chick Lit” snit, and loved it. Its author, Alison Pace, just published her second novel Pug Hill, about Hope McNeill and her unexpected place of peace amid a frustrating life. Taking a break from oogling the local pugs, Alison was kind enough to answer a few questions for us.

Being a writer is obviously many people’s idea of a dream job. And you have that. Congratulations! However, if you could be any one thing besides a professional author, or could have one talent other than writing, what would it be? Pet groomer to the stars? A show on Animal Planet called The Pug Whisperer? Space Cowboy?

I’d like to do something with books, and if it wasn’t writing, I would really like a bit more of an interactive career. I do sometimes long for the office life. I might want to try being a literary agent. If it had nothing to do with books, I’d like to get certified to teach yoga. It’s one of the things that makes me happiest, and then I would actually have a reason to stay in yoga clothes all day.

What’s more nerve wracking – waiting to hear if your book is being published, the days leading up to your book being published or waiting for the Amazon.com page to reload after you’ve hit refresh to see what your rank is?

The days leading up to the book being published. Real, real nerve wracking. And that moment when you have a review, but haven’t started reading it yet.

So you wrote a book about pugs, though you never had a pug. Pug Hill‘s main character, Hope McNeill, has never had a pug either, yet she find much solace in them. What spurred this love of pugs?

I think pugs are so cool, so filled with “personality,” but I actually think that about all dogs. To me, they’re all quite fantastic.

Hope is obsessed with the Zoloft commercial. Did you consider putting her on Zoloft? Do you find it surprising, given the prominence of prescription drugs in our society, that there is a lack of heroines, or even wacky best friends, on Prozac or Zoloft, etc in the chick lit world. Why do you think this is? Or is it too much of a serious topic for the generally light-hearted genre?

No, it was a very conscious decision not to have Hope on Zoloft. Most people wouldn’t longingly watch a Zoloft commercial, they’d go get a prescription. But when we meet Hope, she’s in a very passive place, especially about her depression. For her to go get a prescription right then would have been far too active, and really quite beyond her. And I liked Hope unmedicated. She needed to work through her stuff. Her anti-depressant was facing her fears, not a prescription pad.

Squash? Really? Besides Evan, Hope’s boyfriend in Pug Hill, who plays squash? What, exactly, is squash? And what made you settle on squash over, say, pickleball?

Squash is kind of like tennis, inside a room. I often think of it as played at a club of some sort. People like Evan play squash. I chose squash because I think it says a lot about the type of guy. Yes, it is perhaps superficial, but if you’re the type of man to belong to a squash club, and spend a lot of your free time in squash matches, I think there’s a little built-in commentary to what kind of person you are. Squash, to me, says Biffy in a better way than other sports do, and I very much wanted that for Evan. Or rather, it’s something I wanted Evan to want for himself.

This morning on my boring, soul-destroying commute I partook of a healthy breakfast consisting of cheetos and coffee. What’s your favorite healthy way to kick off the day? Have you justified it, in a “cheetos are dairy! It says so right in the NAME! Sort of!” way?

I justify pizza as healthy all the time. I will have pizza for dinner and honestly convince myself that I’ve had a dietetic meal.

It seems like mothers quite often get short shrift in chick lit books – they’re kooky and psychotic and just a wee bit intolerable, while the fathers tend to fair fairly well. Do you think it’s revenge for all the times our mothers harangued us and told us we weren’t leaving the house until our part was straight, while our fathers just sat in their chair grunting approval?

Oh, I don’t think of it as short shrift. I do think mothers might get more projected on them, because generally the mother-daughter relationship is a quite complex one, a veritable font of inspiration.

Ever consider writing a book from the perfect sister’s point of view? Not necessarily Hope’s sister, but the perfect sibling that tends to exist merely to torture chick lit heroines?

That, for me, would be a bit like writing a novel about a very happy couple. I don’t think there’s a lot of exploration to be had with perfect. I adore a flawed character, you get to help them, and really, they are so much more fun.

One of my many, many embarrassing addictions is bad TV. Sadly, I seem to have lost all of my cheesy TV shows with Charmed‘s cancellation. Can you recommend any shows to fill that empty void? Preferably with hot men (accents a plus.)?

Okay, generally I do watch the shows I watch for more than the hotness, but since you asked the question this way, I’m more than happy to oblige. I like the Gilmore Girls (there you’ve got hot Christopher and hot Logan. Luke, not so hot), House (there’s your accent), The Office is very clever (Jim is cute), Lost (Jack and Sawyer in an endless dance of Good Hot, Bad Hot), Without a Trace and Grey’s Anatomy, where pretty much everyone is hot.

You got to see Three Days of Rain, the Broadway play featuring the unbelievable hotness of Paul Rudd and Bradley Cooper. Please compose an ode about your reaction.

I was so impressed with Bradley Cooper. So not just hot. He was very funny, and has an excellent sense of comic timing. That Bradley Cooper, he’s going places.

Was the flamboyant art gallery owner in If Andy Warhol had a Girlfriend based on a real life nightmare? If so, were you ever tempted to set his cape on fire?

He was an amalgam, more or less. Working in the art world, the thought of setting myself on fire did seem a bit tempting at times. It wasn’t a great place for me, and I have to say, I don’t miss it.

The time and precision it takes to be an art restorer sounds like it would make me want to throttle someone. Do you personally know any art restorers? If so, how do they prevent from cracking, after days of searching for that perfect matching color, then applying it dot. by. dot?

I did know some art restorers from my years working in the art world, so I got in touch with them when I started on the novel. They were incredibly gracious and let me come to the studio and watch them work as they explained the different processes to me. I found it so fascinating. In a lot of ways what they do reminds me of being a writer, only writers are searching for the perfect words rather than the perfect color. So similar in a lot of ways.

What’s something that you’ve noticed happens a lot in Chick Lit fiction that’s never actually happened to you or anyone you know?

Well, in romantic comedies, sometimes you do see the completely perfect man falling for the kind of shlubby and overly neurotic woman. I don’t think that happens in real life. First, I don’t think there is such a thing as a perfect man. And if he is perfect in his physical attributes, could be he’s not so smart and funny and/or he wants to date a supermodel and not the somewhat beleaguered heroine.

Do you feel pressured to write happy endings? Were you ever tempted, for instance, to end Pug Hill *SPOILER FOR HOW THE BOOK DOES NOT END ALERT! LOOK AWAY IF YOU DO NOT WANT TO KNOW HOW IT DOES NOT END! SERIOUSLY!* with Hope waving good bye to her sister as she boards the plane to the commune while her mother picks on her tucking her hair behind her ears as she’s being dumped by a guy? How awful an ending would that be?

No, I don’t feel pressure to write happy endings, but I do like a happy ending, and I do believe in happy endings. I truly wanted Hope to have hers. Especially in this novel, where the reader spends a great deal of time watching this character suffer emotionally, I wanted the reader to see that some things worked out for her.

Can you give us a preview of your next book?

It’s called Through Thick and Thin. It’s the story of two sisters who used to be the best of friends but have grown apart due to the very different paths their lives have taken. They attempt to reconnect through a mutual weight loss quest. And there is, of course, a dog. He has a lot to teach everyone about being human.