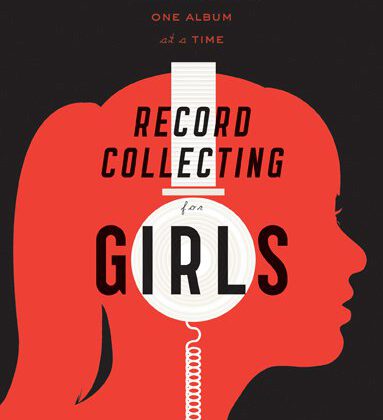 Courtney Smith, author of the just-released Record Collecting for Girls: Unleashing Your Inner Music Nerd, One Album at a Time, and I go back to the days of when PopGurls was a small twinkle of a notion. In our time at MTV.com, we shared a large cubicle also inhabited by a girl whose musical library seemed to consist of two songs – DMX’s “Party Up (Up In Here)” and Paula Cole’s “I Don’t Want to Wait” – which she would play over and over. And over. For about a year. This a bond forged through a special kind of war.

Which is not to say that I can’t be critical. I approached Record Collecting for Girls the same way I approach any friend’s project – really hoping it’ll be fantastic but bracing for the worst. Happily, the bracing didn’t last past a couple of pages. The book is like a long conversation with Courtney which cycles between giddy agreement, hilarious and heartbreaking stories and utter annoyance at her music snobbery. The title, while great, is a bit misleading as it’s really not a guide to record collecting but rather finding new music to score your life with. Courtney takes you through the rules of making your Top Five lists – from all time favorites to make out songs and break up songs. She shares anecdotes and her own song suggestions – I loved the anticipation of the playlist at the end of each chapter and have already checked out several new tracks. The history lessons won’t impress the hardcore music historian (much like reciting an IMDB profile won’t impress a proper fandom geek), but I learned a lot of new things – especially about early girl rock bands.

I roped Courtney into a round of proper PopGurl questions.

I got really excited when I saw Fiona Apple’s “Better Version of Me” in your Top Five playlist. That is the song that has helped get me through the past few years – I play it a lot when I need to push past a mopey phase. If you were to score your own soundtrack for these moments in your life, what songs would you choose:

First ice cream shop visit of the summer
Queen “Bicycle” (I can’t explain this, it just popped into my head and seemed right)

Realizing that you just paid actual money for a Pussycat Dolls concert ticket (there better be shame involved here!)
Radiohead “Creep” (also a terrible song but appropriate to the entire situation)

I am one of those people who discovers a lot of new music through television shows. What TV shows have you been impressed by their song choices? If you could be the music supervisor on any show today, what would it be?
If I could music supe any TV show today, I’d choose Portlandia. Between the cameos and the aesthetic of the show, I think that would be a lot of fun and not tie you strictly to placement and licensing.

I feel like the fun of playing “name that song” while watching TV shows has been waning in the past few years, because there are less shows with interesting soundtracks and it’s more and more a parade of boring indie bands that sound the same.

Obviously some of the classics are The O.C. (honestly, who didn’t watch that show more to hear what music would be on each week than for the plotlines?), My So-Called Life (light on music but when they did use it, what an impact!), and Square Pegs (yes, really go rewatch it on Hulu).

Two of the women singer-songwriters that shaped my collegiate music listening were Liz Phair and Ani Difranco. Neither one of them had much of a presence in your book, but I’m curious what you think of their music and its impact on their female fans.
I’ll start with Ani: I am just not that into her. Never have been. I don’t know what it is but I haven’t ever been able to connect with her music. I’ve tried it out, she’s got some nice songwriting chops but it just doesn’t spark in me. I honestly haven’t got any opinion on her at all. I simply find that I am uninterested. This could change at any time, you never know when something will flip the switch.

Now to Liz. She was also a huge influence on me in college. I’m really glad everyone has reevaluated Whitechocolatespaceegg, because I loved that album when it came out and felt she was unfairly critically lambasted for not making Exile in Guyville again. It’s a fantastic and deeply underrated album.

Unfortunately that was followed by Andy Slater, the then-president of Capitol Records, convincing Liz that she should and could be the next Sheryl Crow. And it’s fine to have commercial ambitions, most professional musicians make music with the idea that people will listen to it. It was not smart to alienate her fanbase so completely with songs produced by The Matrix. She fell down a creative black hole and no one is ever going to get over it because she effectively turned her back on the fans that liked her eccentricity to embrace the kind of music we’re conditioned to hate. At the same time, it’s ridiculous to think a 30-something woman who was now a mother would keep writing “Fuck and Run” over and over. And that is what people wanted. It seems to me there might have been some sort of creative middle ground there, but only Liz Phair knows how to be Liz Phair.

So this Funstyle thing is pretty interesting. She’s clearly fucking with us. For me it’s a bit shocking — I actually personally know and have worked with some of those record guys she calls out on track about how no one wanted her to release that album. I can imagine how those conversations went down and that must have felt totally shitty for her. I can’t say I really enjoy a lot of the songs, but I do enjoy most of the subject matter. I like Liz when she’s candid and lets her insecurities and worries hang out and she comes closest to touching on universal ideas when she does exactly that. Plus, I am now sure I have no idea what the hell Liz Phair’s next move is. That’s pretty cool.

You are a self-confessed music snob. Music snobs tend to annoy people who aren’t. What kind of snob annoys you?
Film snobs. One of my closest friends runs the really great movie blog The Playlist, which I used to write for on occasion under an assumed name, but he has become unbearable to talk to about movies. My eyes just glaze over.

And yes, telling you that is revenge on him for posting the article I wrote for Wired on finding new music to Facebook, tagging several of our friends, and posting the note “look who’s all growed up!”

Is there a band or artist you love that isn’t getting enough attention?
My favorite artist who doesn’t get the love he deserves in America is Liam Finn. He’s Neil Finn’s son. He has released three albums, all of which are fantastic with really interesting production and just lovely songwriting. I saw him on his first American tour and he played as a one-man band. Once you HEAR his songs you’ll wonder how that’s possible. Lots of looping and effects pedals — seriously, go check it out on YouTube. It’ll blow your mind.

THANK YOU for explaining so perfectly “why MTV doesn’t play music videos anymore.” Do you think anyone actually gives thought to their own personal desires for videos before they complain or is it just the obligatory complaint, much like a “FIRST” comment on a blog?
I think the only people who complain about it are journalists who are our age or older. They remember the heyday of MTV, when it was entirely about music and didn’t quite have a brand identity. They choose to forget how many Rod Stewart and Styx videos MTV played. Honestly, reconstructing the first two hours of MTV, commercials and all, for the channel’s 25th birthday taught me this: there was some really shitty music on when MTV was 24 hours of videos.

I think complaining about it is like asking what the kids are doing tweeping on that Facebook thing. It’s completely and willfully out of touch with the way the audience MTV wants to target consumers’ music in favor of thinking things were better “back in my day.”

Okay gramps, good luck with that and let me know if you need help operating that cellular phone.

For someone who wants to check out more music writing and criticism by women, who are three people you’d suggest that they look into?
One of the best is Ann Powers for NPR. She’s recently moved to the South and is writing some really interesting stuff about country music, an area that critics of any gender often overlook. But her pop criticism is very insightful and worth reading as well.

I also very much enjoy Maura Johnston at the Village Voice. I don’t always agree with her and think she can be awfully apologetic about pop music, but she is an amazing writer who knows how to hook you.

I just recently finished Amanda Petrusich‘s book It Still Moves [Lost Songs, Lost Highways, and the Search for the Next American Music] and I liked her voice. I’m keen to pick up her 33 1/3 book on Nick Drake’s “Pink Moon” now. She writes for Pitchfork, Paste and the NY Times, but I like her free-form, editorial writing best.

Back in the day when I was making *NSYNC t-shirts to wear to concerts, I made you a glitter-glue “River You Give Me Shivers” sign to bring to a Weezer show. Did you ever bring it? What sign or t-shirt would you make for an Elvis Costello show? (“I wouldn’t” is not an acceptable answer.)
Ha! I didn’t bring it and I think that was the Weezer show where we went to the PNC Center in NJ and Gideon Yago came and pissed everyone off by being a snob about the music they liked. I did hang it up in my office for years though, I loved that sign.

Stop trying to make me be a fan girl. I wouldn’t make a sign or t-shirt for an Elvis Costello show.

[Since Courtney is being a punk-ass and ignoring rules, even after I threatened to make something up for her – I am gifting this to her in light of her Pussycat Dolls love: “The Pussycat Dolls Push My Buttons – BEEP BEEP MEOW!” (Hey, I had limited time!)]

Stay updated on Record Collecting for Girls: Unleashing Your Inner Music Nerd, One Album at a Time