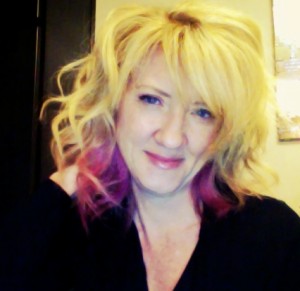 Jessica Conant-Park has one of those jobs that could quite possibly drive someone else mad – she works with her mother. More specifically, she writes ChickLit mysteries with her mother. The Gourmet Girl series stars Chloe, a “food connoisseur on a quest for the perfect meal and man.” The books mix engaging characters, snarky fun and utterly delectable recipes. Just reading this interview will make you hungry, imagine how good the books are!

1. Potatoes – quite possibly the world’s most perfect food. What’s your favorite potato recipe?

Wow, there are so many delicious potato recipes, but one of my favorites is one my Dad introduced me to, called Freddy’s Potatoes. I think the recipe might be from James Beard? Or the NY Times? Anyhow, you cut the potatoes into thick chunks, par-boil them, and then roast them with mounds of butter, whole garlic cloves, and salt and pepper until they are brown. The insides of the potato pieces are nice and mushy and the outsides are crispy and delicious. There are many much more complicated recipes and ways to dress up potatoes until they are almost unrecognizable, but sometimes the best recipes are ones that simply highlight how good an ingredient is… thus, Freddy’s Potatoes!

2. Which was the book that took you the longest to write? The shortest?

Well, I’ve had funny writing schedules because I’ve had to balance part-time childcare with my work. I have a year in between each book and when I was writing Steamed, I think I used the entire twelve months. The third book in the series, Turn Up the Heat, comes out in March and with that book I was pretty behind because my son was only in kindergarten for two-and-a-half hours a day; I wrote the bulk of the book in three months and ended up loving that process. Everything was fresh in my head each morning and I knew exactly where I’d left off and where I wanted to go. I wrote like a mad woman every day but I think the final product was better for it.

3. Do you have a music playlist for writing?

Nope. I can’t write to music. When I’m in a writing “zone” I have enough going on in my head that I can’t take any distraction. But when I finally finish a manuscript and am in the glorious stage of printing it out, that’s when I crank up the music and dance insanely around the house. I love making mixes with completely different types of music; Sam Cooke followed by Britney’s fluffy pop just cracks me up. Or any live music…makes me feel like I finished off the book and someone whisked me off to a Goo Goo Dolls concert!

4. What’s the biggest obstacle you face when writing? That is, what gives you the most trouble? Conversely, what brings you the most joy?

Ugh, I loathe writing the opening pages to a book. There is nothing worse than staring at a blank computer screen with that vicious cursing just blinking at me, demanding that I write a gazillion pages! I feel so much pressure to get those early pages perfect, that what I’ve learned to do is just ignore them, jump ahead to later in the first chapter, and then go back and write the beginning of the book later on.

And then there are days that I just can’t get my writing to flow. I could sit poised at the keyboard and I can barely type. I have an outline, I know what I need to do, and yet nothing comes. When that happens, the best thing to do is not to force it. The next day I might write fifteen or twenty pages with no trouble so things usually balance out.

And that is what I love; those days that my fingers can’t type fast enough, when I’m writing a scene that I love and I’ve got so much to say that I’m practically bubbling over. That’s a rush. Writing any scene with loads of dialogue or narrating any of the numerous scenes in which Chloe is embarrassing herself are my favorites.

5. What’s your writing process like? Do you start as soon as you get a moment/scene or do you wait for the whole story to form before you start writing?

I write from a 25 to 30 page outline. With a mystery, I can’t imagine doing it any other way because the chronology of events and clues is extremely important. I co-write with my mother and her key job is to put our general ideas into a detailed outline. I literally write with the outline next to me and sometimes one sentence will translate into 20 pages.

I have a huge pile of sticky papers lying around my office where I’ve jotted down notes to myself about events, pop culture, scenes, or other details that I want to include and then I can usually find a way to work those in. The nice part of our outlines is I have tons of room to play with aspects of the story and characters that are not directly related to the mystery — I’ve got a fair amount of fun freedom when I write.

6. Now that you write mysteries, do you find yourself particularly suspicious of people in, say, the supermarket with a tin of sardines, a can of whipped cream and a supersize jar of pickles in their carts?

I’m a big snoop when it comes to looking into other people’s shopping carts. Why does that lady have twenty-seven tubs of Cool Whip? Is that man trying to kill him wife with all that heavy cream, butter, and eggs? I’m very judgmental about the contents of a cart. I admire those with piles of fresh produce, beautiful cuts of meat, bags of fresh herbs, and seasoned vinegars. And then there are those whose carts are overloaded with Twinkies, soda, frozen pizzas, and sugary cereals. I have to restrain myself from replacing their junk food with healthier ingredients and shoving a good cook book in their hands.

7. You co-write your books with your mom – if you had to pick a different thing to do together and get paid for it, what would you do instead?

Ooh, how fun! Well, I think we might set up a very nice gourmet food store together. Lots of imported olive oils and sauces, fresh herbs and pastas, fancy mustards, designer waters, and a wonderful wine selection.

8. What is your favorite dessert to have someone else prepare? For you to make?

My personal chef/husband’s honey-lavender crème brulee is out of this world; perfectly creamy, not too sweet, and it’s better than any restaurant dessert. I don’t bake too often, but when I do I turn to Jamie Oliver; he has a great recipe for a dense, rich, chocolate torte that isn’t too difficult but is absolutely fantastic. Served with a little whipped cream, I feel like a gourmet chef myself!

9. What is the embarrassing story that your mother breaks out in mixed company?

Oh, no…Well, one of her favorite stories is when I was five or six years old, I poked holes (I mean, many, many holes) in all of my parents’ screens on their screened-in patio. Evidently I wanted to let the birds in…Karma stinks, though, because my son has popped out almost every screen in my house.

10. What is your nerdiest hobby?

Well, speaking of birds (ahem) I will admit in the privacy of this interview that I have taken up backyard bird watching. I started with one hummingbird feeder, and when that actually attracted hummingbirds, I went a little nuts. I drilled holes in a log, filled it with a disgusting peanut butter and sunflower mixture, and hung it on a pulley system for reloading. Then I attached a suet feeder to that, ordered a bird gazebo, and hammered two poles into the ground to support the other two feeders I bought. And I’ll even confess to you that I have a bird guide in which I keep a list of the types of the birds that I’ve seen and the date of their arrival. So embarrassing…

There is a commercial for ice cream (Brigham’s, I think?) [ed note: Baskin-Robbins]where the mother and son are finishing dinner at the kitchen table. The father is behind them and announces (clearly to the son) that whoever finishes their peas will get to go out for ice cream. Without missing a beat, the mother picks up her plate, gulps down the peas, and licks it clean. I love that one! It’s totally something I would do. Anything for ice cream, right?

(BTW, do you know there is such a thing as cheesecake ice cream? I just had it the other night and I’m hooked!)

12. Is there something you’ve written that you look back on and hang your head in shame? (Even if it’s the poem you wrote to your boyfriend in the 6th grade.)

Unfortunately, my shameful writing was not that long ago. When I first started writing the Gourmet Girl series, I was still getting my bearings as a writer and hadn’t yet learned to trust my own voice. I distinctly remember writing four or five pages in an attempt to channel the writing style of about three other authors that I admired. I think I was trying to deliver a deep and soulful scene and it was just disastrous. Horribly, horribly disastrous. I went back a few days later and deleted the entire thing.

13. For your last meal, you can have anything you want, prepared by anyone. What’s on the menu?

Again, I’m going to go with my husband on this one. The first restaurant meal he made for me is still one of the best meals I’ve had. Overstuffed spring rolls stuffed with crisp, shredded vegetables, seasoned with roasted garlic, herbs and spices, and served with sweet soy sauce and a mango dipping sauce. Then for the entrée, deep-fried soft-shell crab served on a lobster and artichoke hash and drizzled with some mysterious sauce that he refuses to identify (lest I run off with his chef secrets.) For dessert? A mango and guava tart. Total perfection.

14. In the big-screen adaptation of the Gourmet Girl series, who do you cast as Chloe and Josh?

As Chloe, maybe a slightly younger Autumn Reeser (Taylor from The O.C.) or Selma Blair? And for Josh, I can picture Hayden Christensen or (again, maybe a younger) Josh Lucas.

15. Describe the plots of your books in 10 words or less.