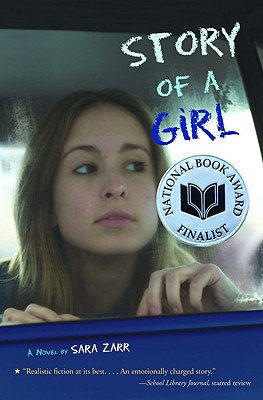 Sara Zarr knocked it out of the park with her first young adult novel, Story of a Girl, in 2007 – it got picked as a National Book Award Finalist. Her lovely and touching second novel, Sweethearts, came out in February – and the cover makes me want to bake every time I see it. A lot. And then fill my face with delicious cookies.

She talks about her writing process, step-parents in literature and, of course, potatoes.

1. What’s your writing process like? Do you start as soon as you get a moment/scene or do you wait for the whole story to form before you start writing?

I don’t wait too long to start. As soon as I have the characters and a situation, and I determine that it might be enough of a story to work for a novel, I start writing and see how it feels. Sometimes at this point I realize that I was wrong –that there isn’t really a story there. It can take a few false starts before I hit on the book that I truly want to write.

2. In Sweethearts, you tell both the present and past stories of Jenna and Cameron. Did you write one out fully, or write them simultaneously?

I wrote them simultaneously. I didn’t really know for sure myself what happened in that room during childhood until I got to know the characters better in the process of writing. Planning and plotting aren’t so much my strong points in early drafts.

3. Was acceptance or loneliness the driving force for Jenna’s transformation? Or something else entirely?

Honestly, I think it was survival. It wasn’t about being popular or being less lonely. The kind of bullying and torment she had to deal with was almost bearable when she had Cameron for a friend. Once she believed he was gone, she instinctively knew that if she was going to make it through the rest of her childhood and adolescence she had to protect herself from all the negative attention.

Her friendships were as real as any of our friendships are, I think. Her belief that her friends didn’t really know her was based on the fearful, lonely child she’d been in the past, while the truth is her friends knew her better than she thought. I think you start to see at the end of the book that it’s not her friendships that change so much as her trust in them. It begins to dawn on her that she’s not going to be abandoned.

5. Alan, Jenna’s step-dad, is a fantastic, realistic character and a refreshing change to the absent or abusive parents in a lot of YA. What inspired you to create him?

Thank you – I love Alan, too! My mom remarried when I was in middle school and my stepdad was a caring and good person, so I knew from first-hand experiences that sometimes step-parents and second marriages can be a huge change for the better in families. Also, after writing the father in Story of a Girl and having Cameron’s father in Sweethearts be so screwed up, I was ready to write about a good father. There are lots of them out there.

6. When you’re asked to read from Story of a Girl and Sweethearts, what’s the chapter you normally choose and why?

It depends a little on the audience and setting, but I have a few favorite scenes from Story of a Girl, including a part near the end when Deanna and her mom are watching TV on the couch and she first starts to have a little bit of hope for her family relationships. I also like the scene with Deanna and her father when she’s watching him hold her brother’s baby and thinking about how he must have held her like that when she was a baby.

For Sweethearts, I’ve been reading from near the beginning, when Jenna is recalling her memories of Cameron, or a little later when he comes to her house for their first real conversation after his reappearance.

7. If you could go back and make changes to either of the books, would you? And if so, what would you change?

Oh, gosh. I think every writer wants to change things about their published books.

The changes I want to make are always small things, though — word choices or little nuances. In fact, when I’m reading aloud from both books I usually change words as I go. I can’t help myself! I wouldn’t change any major plot points, though. The editing process before publication does a good job of addressing those things.

8. What was the one moment in that madness that made it all worth it, and what was the moment that most made you think twice about your chosen career path?

Ha! There’s definitely been more than one moment that made me think twice about my career. Writing is hard work, and having successfully completed two novels hasn’t made it any easier. While I wrote Sweethearts, I had a really bad period of about three weeks during which I was crying a lot and calling my agent and saying and thinking things like, “I can’t do this. I can’t.” Fortunately, he was very reassuring and calm and kept me from doing anything rash.

Every time I hear from a reader who has an emotional response to my stories or characters it’s all worth it. I do have to say that the teen press conference during the National Book Awards has probably been the favorite moment of my career to date. Having an auditorium full of teens cheer because of something I wrote was amazing. I felt like a total rock star.

9. When you’re flipping through cable channels, what movies will you always stop on – even if only to watch for a few minutes?

There are so many movies I love that I would never watch again, because I’ve already had a perfect experience of them, but other movies seem to beg for repeated in-home viewing: Love & Basketball (there’s something so comforting about that movie, and it’s on a LOT), As Good As It Gets, It’s a Wonderful Life, Pretty in Pink, Mystic Pizza.

Speaking of Julia Roberts, there were a few years in my twenties when this really bad movie called Satisfaction was on, like, constantly. I never turned it off. I must have seen that a billion times.

10. You love to cook — what’s your favorite thing to do with a potato (the world’s perfect food)?

All hail the mighty potato! There are so many ways to enjoy it, but I like to microwave it until it’s reallllllly done (and the skin starts to get microwave burns) and then bathe it in butter and salt and pepper and mash it all up in a bowl. That’s a cure for a lot of ills, let me tell you.

To learn more about Sara Zarr and her books — visit her site at http://www.sarazarr.com/