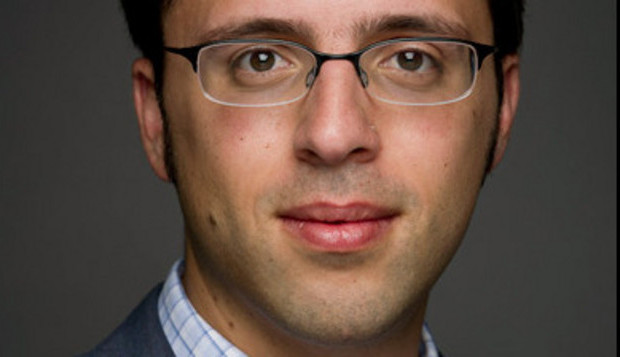 Pandagon’s Ezra Klein has a thing about campaign strategies and the number of times President Bush mentions Al Qaeda in his stump speeches, but what we really love is his penchant for breaking down the polling numbers for us. And even though he’s being modest about how important that task can be for us non-“polinerds” in the audience, we would never kick a man out of bed for explaining margin of error.

In the third installment of our Pop! The Vote series, Ezra doesn’t actually talk about polls (we gave that question to his co-editor, Jesse), but that doesn’t mean you shouldn’t read it. You might even want to steal some of his answers to make yourself sound even smarter at cocktail parties.

How do you motivate people to study the issues of this election instead of sound bites?

Wait, there are issues in this election? (haha)

I wouldn’t say that my writing is a motivating factor for people. My readers are composed primarily of polinerds and infojunkies who often know more about the issues than I do. If I cast my net wide enough and get them thinking about new issues, that’s always positive, but my use is more in the realm of analysis and, since my readers come because they trust Jesse and I (to some extent, at least), I fear they often study my findings rather than a certified expert’s. It’s kind of that Jon Stewart thing: Don’t you know how little I know?

That, of course, is on my blog. When I write for more general audiences, I use a combination of mockery, ridicule and guilt to force them onto candidate web pages. And it sounds funny, but I’m serious. I think people who spout uninformed idiocy and whine that “Kerry has no plans!” deserve to don a dunce hat, sit in a corner, and think about what they’ve done. And in my columns, I’m crystal clear about that.

Why will “the truth” never be a viable campaign strategy? Do all those whining constituents really want “the truth”?

Nah, they can’t handle the truth. In this country, the truth is kinda scary to people. Americans always say we want truth in advertising, but it’s not, excuse my redundancy, true. If every time we pulled up to the window and ordered a Big N’ Tasty with Cheese the server said, “That’ll be two dollars, 37 grams of fat, 12 grams of saturated fat, and enough sodium to send your blood pressure to the moon,” we’d be an unhappy people.

That’s kind of how our future looks. Social Security is going down the toilet, Medicare is going to blow up in our faces, George Bush has done a terrible job fighting terrorism and a worse one containing nuclear proliferation, blah blah blah. I don’t mean to be macabre, all these problems have solutions and I’m tremendously optimistic that we’ll implement them. But Americans really don’t want to hear about it, they want to elect joy and sunshine and, even if the pill they’re about to swallow is bitter, be told it’s chocolate.

Basically, until the truth stops sucking, it’s not going to be a very viable campaign strategy. The only exception is for challengers who, on certain issues, can use the truth of the incumbent’s incompetence to move the American public into their camp. And I think you’re seeing some of that in this election.

The draft hasn’t become a key issue in this presidential election. What would it take to convince people that it should be?

I don’t know, an actual draft? The draft is an underground issue in this election: It’s a hard knot of fear that’s moving many Kerry supporters to the polls. But it’s an issue that requires a certain amount of caution because, to be honest, Bush isn’t going to institute a draft. He’d never get it through Congress and it’d destroy the Republican party for 10 years – Americans don’t trust him or his wars enough to sacrifice for them.

Nevertheless, I’ve long argued that Kerry should use it more than he does, if only because it brings home the immediacy of what a war-hungry president can mean to a nation.

The Swiftvet stories should never have been news. Nor, and I know this is going to get me in trouble, should Bush’s Guard service. He didn’t go, Kerry did and was decorated, and that should have been that. Even if we could prove what we already know and make certain the entire country understood that a 20-year old son of a sitting senator got preferential treatment, who, in the long run, would give a shit? Not me, Bush is bad for enough other reasons that I don’t have to search the backlogs of his history to find a point of attack.

Which brings me to the untold story of this election, which is that every measure shows our country rapidly approaching total breakdown (deficit, attitudes towards America, number of people uninsured, income inequality, loose nuclear material, etc.) and that should really be news. It’s as if nobody wants to report what a remarkably bad job this president has done. In the first debate, he repeatedly said “it’s hard work.” Yes, clearly too hard, and it’s time he took a rest.

Do you think that people have gradually grown more interested in politics, or is it just because this is a highly emotional election year? Do you think that the current trend will wane after November 2nd, or will people continue to be motivated to find out what’s going on in the government?

It’ll wane, unless something huge happens. 9/11 could have sparked a new era in civic involvement and public participation, but Bush – consciously or unconsciously – squandered the remarkable moment. For that, more than anything else he’s done, I’ll never forgive him. A president with a better understanding of the office and its historic potential – Gore or Kerry or Clinton or McCain or fucking Gingrich would have fit the bill, even if I wouldn’t have agreed with all their responses – could make a 9/11-sized event transformative for our country. It’s quite spectacular that Bush was able to make it, in the end summation, divisive. You’ve got to work hard to achieve that.

Press Secretary or Campaign Manager: Who has the loosest morals?

Bush has a habit of misspeaking, in ways that make him look rather buffoonish. Why does this not concern the majority of Americans?

I’m really not sure what happened that made us stop demanding that our presidents represent the best of society and begin accepting them as mere reflections of society. I’m writing an article (watch for it at
gadflyer.com) on this election as metaphor, where Bush represents this one, very mediocre, very deceptive archetype of the aristocrat while Kerry is a much more classic, accomplished, noblesse oblige sort of figure. In the end, who we elect means something for children who are supposed to grow up admiring our leaders, and the difference between an articulate war hero and a swaggering, ineloquent son of privilege really couldn’t be starker.

In an election season rife with mismanagement, why aren’t more people resigning or getting fired?

It’s a sign of weakness to fire anyone on your campaign team. It feeds stories of internal weakness or uncertainty, so instead, you just shunt them over to the DNC (colloquially known as getting “donked,” which sounds hilariously obscene to me) or stop listening to them. Even so, I think both campaigns have been generally competent…though I’d like to see Bob Shrum announce that, after this election, he will begin advising Republicans and will never sully another Democratic effort.

Celebrities are the new must-have accessory for this political season. In the end, do you think celebrity endorsements help or hinder a candidate?

They probably do nothing, or next to nothing. But celebrities know rich people, and can thus help fundraising. And I must admit that Natalie Portman’s decision to go with Kerry was crucial in making me follow suit. (Not really. Okay, really, particularly if she reads this.)

What are your best sources for nonpartisan, objective information on the campaigns?

Pandagon.net…wait, you said nonpartisan, objective, and information, huh? I love www.politicalwire.com. News aggregators like Google News and My Way are pretty helpful. I really don’t know – I inhale mostly partisan information, but I do so from both sides, with a healthy dose of skepticism and focusing on writers whose minds and analyses I trust. I happen to believe that you learn much more from someone’s argument than their desperate attempt to provide balance, the latter is such a perverting factor that, by the time journalistic protocols are met, the actual information is shrouded in reams of conflicting spin. A single side’s coherent presentation is, I think, much easier to decipher and evaluate.