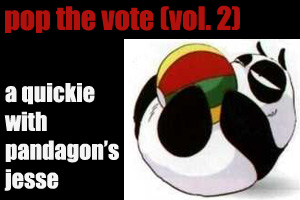 It’s less than a month now to the big Bush-Kerry face off. And as extremely important as it is to be registered, it’s FAR more important to educate yourself on the issues. And even more important that that? Actually voting.

In PopGurls’ second installment of Pop the Vote, Pandagon.com’s Jesse Taylor gives you several good reasons to get out and vote. A former Limbaugh-lovin’ Republican, he now hangs on the blue side of the fence after two major Political Awakenings – the last of which was when he examined the actual issues in the 2000 Presidential election and realized he agreed with the Democrats on most things, and really, really didn’t agree with Bush on anything.

Jesse talks to PopGurls about Debate bragging rights, voter outreach programs and the secret to being on The Daily Show.

What do you say to people who say their vote doesn’t count?

The good civic-minded me wants to cluck at them about how in a democracy, your voice doesn’t count unless you show up at the polls and say something. In reality, I just want to remind them that most of us have probably done more work to get free burritos than it takes to vote every year. There’s always someone for whom your vote can do some good, even if it’s the sheriff or the county sub-commissioner. Also, it’s an investment in your own future – the more you vote, the more likely a candidate is to come along to run on something you like.

Even with all the Choose or Lose, Rock the Vote and other campaigns driving young voter registration – do you think that either party has successfully reached out to 18-24 year olds? What would you suggest they do to draw younger people to their causes?

Well, the 527s and other voter outreach groups have obviously done a great job, particularly on the Democratic side, of signing up new voters. However, asking if the parties have done good jobs…parties don’t appeal to young voters in large part because they aren’t constant groups over two or three elections. When I’m 18, I’m likely going to vote on a whole different series of issues than I will when I’m 22 – as has happened between 2000 and 2004. The secret is for every 18-year-old to adopt a child, because parents get more attention than strippers dressed in ballots.

With the internet, state border and boundaries are blurred. However, is it ethical for residents of, say New York, to donate money to a congressional race challenger in Utah?

Ethical? Yes. Smart? Is there such a thing as a contested race in Utah?

I could see the argument, say, back under the Articles of Confederation, but we’re a good couple of centuries removed from states acting like separate countries. It’s ethical, particularly in national bodies where the affiliation of the House or Senate can affect how your representative functions. If I’m a Republican and I have a Republican representative who can’t get their platform passed because Democrats have a narrow lead in the House, then helping a candidate a time zone away directly benefits me if it means my party gets control of the agenda.

If you could get three politicians to honestly answer one question for you – who would they be and what would you ask?

If we’re talking about people who are alive…

1.) John Kerry – Could you start that “late finisher” thing a little bit earlier next time?

2.) Orrin Hatch – How does it feel to be the most conflicted man in the history of the United States Senate?

3.) George H.W. Bush – Is your son a better or worse president than you? And is there any way you could answer this question and not lie?

How much stock do you put in political polling?

Remember that episode of ALF where he wants to eat the cat? Yeah, that was good.

In your opinion, what is going to be the deciding issue for most people when going to the polls in November?

Ralph Nader: Selfish rabble-rouser or concerned man of the people?

Selfish rabble-rouser for the man. I don’t understand how he’s become the patron saint of third parties when he doesn’t have an actual third party. It’s like being the head of the Joint Chiefs of Staff when you’re a committed pacifist, or eating at Long John Silver’s when you want food.

Which news organization has been the most blatantly partisan in its election coverage?

Fox News, as the only blatantly partisan news organization out there, wins in a battle by fiat.

Probably the former, because Jon Stewart will never pull an O’Reilly and declare his singular power to make or break democracy as we know it. Plus, the secret to being on The Daily Show isn’t being funny, it’s not laughing along.

Good money was on Bush to beat Kerry in the debates. Is there any way Kerry could snap back from a good beating in future debates?

Nah, but since Kerry won the first debate…

If Kerry loses a debate, it’s much worse for him than for Bush, because the Republican spin machine is relentless. Bush loses a debate, and what happens? It becomes about how Kerry didn’t win by enough. This is like the Lakers saying that the Pistons’ championship doesn’t count because they didn’t lose the four games in a bad enough fashion. The expectations for Bush can never go low enough. If the standard in a debate is that Bush wins if he doesn’t eat dirt, and he comes with Tex-Mex NutraGrow, then the standard will be whether or not he drooled while eating it.