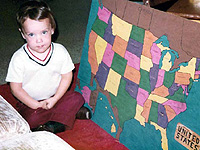 It’s just a little over a month until the 2004 Presidential election, do you know where your vote is? We sure as hell hope so. In one of the most heated election years in recent memory, every single stinking vote counts.

Along with several million other folks who prefer to get their political news from entertaining sources, like The Daily Show‘s Jon Stewart (whose publicist won’t return our calls, by the way), we here at PopGurls have turned to the trendiest frontier in politics since the navy blue jacket: bloggers. There are hundreds of them out there, compiling news stories each day so you don’t have to, and providing good n’ snarky commentary, because why would you want to learn about politics any other way? In the coming weeks, we’ll introduce you to some of our favorite bloggers, who agreed to answer all our very important election-tinged questions – and some of our less important ones, too.

First up is Norbizness, who does a fine job pointing out the inherent lameness in national news organizations, ill-informed Americans, and George W. Bush. We never get tired of someone else breaking down the statistics for us. Plus, he seems to have a soft spot for The Simpsons and Futurama, and we dig that.

What do you say to people who say their vote doesn’t count?

The motherly approach would be “Cast your vote! Don’t you know that there are people in China and low-income areas of Florida that don’t even get the opportunity to vote?” Seriously – unless you live in the bluest of blue or reddest of red districts, it’s likely that at least one of your many votes on Election Day will count. I, for instance, live in a Democratic enclave (Austin) of a much larger Republican state (Texas), so my vote will not impact on the Presidential race, but could influence local contests. However, if you live in all-GOP Elk Nutsac, Montana, forget about it. Go see a movie, assuming that there’s a theater within 100 miles of you.

If we wanted to get younger people interested in politics earlier on in an election season – would it be more effective to turn the primaries into a three-tiered elimination round based on nationwide voting rather than the process we’ve got now?

Voting three times? I don’t think that would work unless the eliminated candidates are forced to participate in a humiliating reality TV show (Help, I’m Missing a Kidney! or Trailer-Park Wife-Swap Jamboree) as a consequence. Also, interest in politics should be gauged by more than the number of people who play Who Wants to Be a White Millionaire President? once every four years.

Has impartial reporting gone by the wayside for good? If not, who is actually making an effort, in your opinion?

I think that there’s too much impartiality; i.e. reporters turning into stenographers. The most common analogy is one side saying that the Earth is round and one side saying that the Earth is flat being reported as “Shape of Earth: Views Differ.” Bland, corporate news outlets reprinting campaign press releases has sucked all the wind out of investigative reporting, which is only being done by pioneering trailblazers like Seymour Hersh, reputable British newspapers (those without Page Three Girls), or that weird, leathery, hermaphroditic fashion reporter from Entertainment Tonight.

Do you ever see the pendulum swinging back toward investigative journalism in its truest form, given the fact that most major media outlets are now owned by corporations who may have a vested interest in promoting a spin?

Why will “the truth” never be a viable campaign strategy? Do all those whining constituents really want “the truth” anyway?

No, and hell no. Note that most Viagra commercials don’t begin with a gravelly-voiced announcer exclaiming “You impotent, flaccid loser!” or putting the rectal bleeding side-effect disclaimer in large, bold letters. Voters want to hold out hope that purchasing Lysol products will transform their efficiency apartment into a 4-bedroom chalet, as opposed to that America-hating Formula 409.

Non-newsworthy: Anything that occupies the news cycle for 24 hours to the exclusion of all other world events (and then disappears), gets a 36-point font headline on the Drudge Report, or causes hundreds of weblog writers to type the same, dreary post.

Should have been: Things that affect people every day: the environment, the rising costs of health insurance and tuition, and the explosion of low wage, benefit-less McJobs.

Celebrities are new the must-have accessory for this political season. In the end, do you think celebrity endorsements help or hinder a candidate?

I think that they’re good in terms of firing up the base at a campaign rally. Who wants to hear from the state Agricultural Commissioner when you can get some C-list celebrity like Steven Baldwin or Big Pussy from The Sopranos to add a dollop of faux glitz to your proceedings? Also, without them, where would the “pointless bitching about politically active celebrities” cottage industry be? Nowhere, that’s where.

How much stock do you put in political polling?

Not to sound like a poli-geek, but certain types of polls can be useful, such as tracking polls that use thousands of people. The problem is when the samples aren’t representative, such as a lazy pollster handing out questionnaires exclusively at either a gun show or Ani DiFranco concert. The danger is the vote-dampening effect, where one large race appears to be sewn up, causing people to stay home instead of trying to influence hotly contested local elections. They also regularly inform us of the steady undercurrent of brain-dead delusion (e.g. 40% believing in 9/11 involvement by Iraq) in America, which is never a bad thing.

In your opinion, what’s been the most heinous blunder in the current presidential race?

Dick Cheney not having a fake coronary, getting spirited away to a secret underground bunker hospital, and being replaced by Rudy Giuliani.

Press Secretary or Campaign Manager: Who has the loosest morals?

Campaign manager, definitely, in that they get paid to create snarky and misleading non-news items. For all the shit I heap on absolute empty suits like Scott McClellan or Ari Fleischer, I feel a small tinge of sympathy for their having to mouth empty platitudes like some demented Fisher-Price See n’ Say (“The President says… we’re turning the corner!”).

Do you really feel sympathy for the Aris of this administration? Do you think they’re talking heads, or more in a West Wing, CJ Cregg kind of role where they are political activists for the GOP, and would not have gotten their jobs if they didn’t believe the way this administration believes? You have to share an ideology in the Bush White House, it seems, to get a post.

Only in the loosest sense of the word “sympathy,” i.e. sympathy for the constraints of the position rather than personal sympathy towards the oily, hyper-partisan douchebag that actually occupies the position. I don’t know whether to laugh or cringe when witnessing the Moebius strip of non-answers spewed by a professional liar like Ari.

Is it time for the Electoral College to be revamped?

Probably so. The fact that Wyoming has the same number of Senators as New York should be adequate protection for their interests, whatever those might be. I’m guessing it has something to do with llama ranches and not burning flags. I wouldn’t go to a strictly popular vote, but I would start introducing fractional electoral votes. However, I realize that we are in the Age of Hard Math, so I won’t hold my breath.