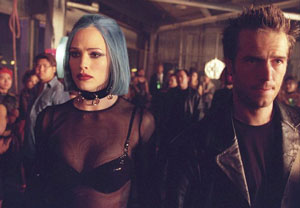 Season finales, on a whole, are over-hyped, overblown debacles of painful proportions. An entire season builds up to one hour, that damn finale that’s usually way too predictable and never seems to quite tie everything together in a way that satisfies you. This season’s crop of finales was daring to follow this well-established pattern.

And then along came Alias.

Was it overblown? Definitely. Was the script at anytime questionable, implausible and predictable? Oh, assuredly. And we’ll get back to that later. But, more importantly, did it rock? Fuck, yeah.

While anyone who had seen half an episode could have guessed that Haldecki was the mole and that Sydney’s mother would turn out to be “the Man,” none of this really mattered. It seems that as long as you tell your story intelligently, keep your pacing tight and dress Vaughn in leather, things like wondering why Sydney didn’t just close the door to room 47 to stave off the wall of water, among other things, just don’t seem to matter. None of this really bothered us. And while some could accuse us of being unfair to other shows with questionable execution, we beg to differ. There’s a difference between them.

Alias did it right.

Not only did the writers manage to tie together a whole season of Rambaldi nonsense, Will’s investigation into Danny’s death (and consequently SD-6) and Sydney’s combined searches for her mother and the Man in one impressive swoop, they also managed to circle back to the beginning. They kindly threw in a scene for nearly every kind of Alias fan, and even remembered that Francie was still alive. And it did all this while leaving you screaming that there are at least 4 months to go before you find out what the hell happens. Frustrating, yes. But also quite refreshing after a crop of shows that just don’t seem to give a damn.

Below we praise what they did right, and mildly chastise the bit they got wrong.

The pacing: We already mentioned this, but it is so key to an enjoyable episode it bears repeating. No scene, barring the scene in the train station, stayed past its welcome. There’s power in knowing when you’ve said and shown enough. The interrogation scene between Jack and Haldecki, for instance, could have easily been dragged on interminably. Instead, following a credo that Joss Whedon used to adhere to, the writers realized less was more, leaving the viewer to mull over Jack’s actions as they try to keep up with the next scene. The scene managed to be brutal and shocking, without going for the overly dramatic or the gore. The action scenes were also short and to the point and made effective use of slow-motion and Sydney’s practical combination of blue hair and leather bra (yes, that’s sarcasm. thanks.).

Characterization: Alias has always been great at dropping little bits into the script that remind us that the characters have histories together. Like Syd and Francie, when she was still on the show, reminiscing about an evil professor they once had, or Sloane reminding Jack that he has always stood in for him when Jack wasn’t “available”. The writers give each character their moment of humanity – the spotlight doesn’t just belong to the young and the beautiful, and they do it without dropping an anvil on your head. Building great characters is a skill many have lost *cough*mutant enemy*cough*. Subtlety is key; it turns good moments into great ones. For instance, this episode gave us a great moment between Jack and his CIA superior Devlin. There wasn’t a lot of talk or exposition, just a simple question that went unanswered and spoke volumes about Jack’s character: “We’re friends, right?” It was a simple moment, and it was left alone. We need more of those in TV today.

The Little Things: It’s the little things that make the fans happy. Sydney and Vaughn holding hands while walking through a crowded club to a techno beat. Will hugging Jack, thanking him for coming for him. The look on Sloane’s face after his wife forgave him. Believe it or not, fans appreciate these moments more than Sydney’s latest guise. Well, most fans.

Tying up Loose Ends: I know I wasn’t the only one afraid they were going to leave us hanging with the Circumference. Thankfully they explained it just enough to give the audience an idea of what it is, giving them room to play with next season. ydney found her mother and the Man in one fell swoop, effectively bringing the year’s goals to a close. All this, and still they have enough unknown material to kick off next season.

And now, since nothing’s ever perfect, the bit that got off track:

Wardrobe: We’re sorry, but how did Sydney not pop out of that leather bra? And fighting in vinyl pants? Has anyone on this show ever tried a high kick in vinyl pants? We thought not.

Implausibilities: I seriously doubt that Haldecki, only having been with Khasinau for 2 years, would be privilege to the EXACT location, down to the smallest detail, of where the Circumference was stored. I also seriously doubt, having been threatened by Jack once already in the garage, that he would walk so carelessly to his vehicle. He’s CIA. He’s pissed people off. Dude, he’s going to check the backseat. I’m just sayin’. And while I’m mildly chastising the plot, I really don’t think a trained CIA operative is going to be so stupid as to stand there and gawk at a wall of water. Even if his trained SD-6 partner was so stupid as to not shut the frickin’ door to room 47.

The Train Station: All right, folks. We know they love each other. We know they can’t have each other. We know Vaughn is a crazy, lovesick handler. But did we really have to hear the story about his father and the diary? Hey, Company Man, next time just stare straight ahead and say “I’m with you.” It would’ve been much more powerful, I promise you. And then they would’ve had extra screen time for you and your leather. See? Everyone wins.

The Action Sequences: We love our action. A lot. And we cut Alias a lot of slack in this department, especially since Buffy’s fight sequences have evolved into something slightly less exciting than watching jello mold. That being said, things have to change. Sydney is a super duper spy. I’m sorry folks, I know you’re trying to make her all empowered and shit, but if her enemies are packing, she needs to be too. She looks silly, and your arch villains look sillier. I mean, they can’t even take down one unarmed woman? Exhibit A: Two men ran at Sydney with very big guns. Huge guns. Evil looking guns. Did either one pull said evil gun on her? No, they ran towards her and allowed her to kick their ass, even assisting her in some respects. Do evil masterminds in Taipei train their recruits so poorly? Do they tell them to bend down so the opposing spy can roll over their back and kick their partner? Do they?