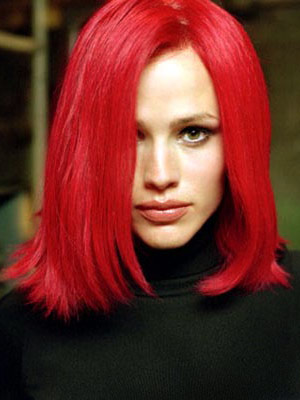 Hollywood loves an awards show. You know it, I know it, they know it. So, to honor one of my favorite shows that is rapidly becoming the most maddening show on TV that I might actually stop watching (and people, I watched Roswell ’til the bitter end, thanks), I present to you the first annual** Alias Poppies! *

Most Wasted Actor In A Role That Should Have Been Fantastic: Merrin Dungey!

Poor Merrin. She gave up her cushy spots as recurring guest star on Malcolm in the Middle and The King of Queens for this? Not only did they give her original character nothing to do and reduced her to 5-second cameos of intense pain (for the viewer, not Francie. Bouillabaisse, anyone?), they killed off her character, instructed her to play an evil clone that more resembled an android than a person, had her train for fighting all year long, then killed her off in the finale after one fight. But rather than be appalled at Bad Robot for this behavior, I instead choose to applaud Merrin for that moving and hysterical death scene and wish her luck on her next project. Go back to Malcolm. Stevie misses you.

Most Over Hyped And Useless Character: Irina Derevko!

Though Lena was a contender for Merrin’s award (see above), ultimately it was the character that was wasted, not the actress—unlike Merrin, Lena was given something to do besides look sketchy and make bouillabaisse. Unfortunately what she was given to do involved playing a character without depth or actual motivations, who didn’t do a whole lot more than look sketchy. If she had a kitchen in that CIA cell, I bet she would have been bustin’ out the bouillabaisse. But at least she had things to do. Like catch flies in her CIA cell, toy with her daughter’s emotions and stare intelligently at people, all the while never actually living up to her hype as a bad mambajamba who kills people and runs a worldwide crime syndicate that was busy enough to put a bee in the dearly departed SD-6’s bonnet.

Following the theme carefully laid out earlier in this season when Michael tapped a grieving Alice because he couldn’t have Syd and then promptly dropped her as soon as he could have Syd, Michael Vaughn managed to grieve, date, propose, plan a wedding and presumably go on his honeymoon—all in under 2 years. You go Vaughn! We salute your cold-heartedness and dedication to getting some! And if Alice does return as your lucky bride, we only admire your ability to continually be willing to use her as a doormat even more!

(We are not S/V shippers. Vaughn marries someone else? Fine. A bit of angst and tortured, longing glances? Something we can handle. But the fear of a year-long angstathon is valid, as is the fact that no one out there’s really going to stand beside someone who cheats on his wife, even if it is for someone as hot and fucked up as Sydney. Ergo, one just sort of wonders how this will be resolved without making us want to break our TVs. Because, really folks. All that lies ahead down this road are tears, bitterness, sexual tension and the ultimate demise of Vaughn’s poor, poor, probably Alice wife. Hence, bitterness.)

I watch Alias for the spy aspect—not the hokum aspect. If I wanted that, I would have watched the last two seasons of The X-Files. Therefore I find Rambaldi, when shoved continuously down my throat, interminable and pine for the days when Syd pranced around in wigs and ridiculous outfits and made it look like fun. And a two-year time jump? Only leaves frightening, annoying options: Rambaldi-fueled time travel, a dream sequence or, as many on the TWOP boards believe, a stupid Alice in Wonderland parallel from hell.

Two hot women going at it like two teenage girls who showed up to the prom in the same designer gown. Could anyone possibly ask for more? Besides at least one storyline that actually resolves, I mean? And hey, Merrin may have gotten screwed, but at least she went out with a kick or two to Jen’s face.

I know, of late there have been quite a bit to choose from in this category. The Irina Derevko “is she or isn’t she” sits pretty high on this list, as a matter of fact. However, since I decided I just don’t care, she’s not really even giving Rambaldi a run for his money. And I know there are some deranged people, like our girl loki for example, who like the Rambaldi crap. I find it annoying, pedestrian and not at all appropriate for a spy story. If I wanted this crap I would have watched the last 2 1⁄2 seasons of The XF, as previously mentioned. But I didn’t, did I? Not even Gillian Anderson could make me watch it. Not only do I find Rambaldi to be annoying to the point of stupidity, I find it even more annoying that this was started without a plan. I could be wrong about this, sure, but it seems fairly damn obvious to me that lately the Roswell method of shotgunning has been taking place. Nobody knows what Rambaldi is, was or was doing, yet they keep bothering us and in fact centering the entire show about it. A prophecy? For fuck’s sake, JJ. For fuck’s sake.

I know, I know. One would think this should go to Vaughn for his “This conversation is over” slap in the face to Sydney, but since he misplaced his balls again almost immediately by forgiving Sydney at the end of the very same episode, he took himself out of the running. But Will? His “You ruined my life” rant was a fantastic follow up to his now-classic “One in five, bitch. One in five!” Perhaps Will can do this every episode on the show! You know, grow a backbone for five seconds?

This was the most difficult category, I have to say. How do you choose between the Sadistic Dentist who reappeared just long enough to torture Marshall and get pushed over by Syd, Irina’s “The Man” legacy, Project Christmas (briefly and infuriatingly revisited in the finale with Alison/Francie)? Each of them were delightfully (read: not at all.) frustrating and futile points that went nowhere.

I will probably get hate mail and shit for this, but seriously, the man does nothing. Accents, while hot, do not make one useful, on any level. That includes this one and the next. He has no backstory, save Allison’s tongue being shoved down his throat and his short soliloquy to Christian Slater about being young and ambitious. He’s been around a year and half and we know nothing but that he was supposedly the right hand man of the Man, yet his loyalties seem to be everchanging—he’s Irina’s bitch, he’s Sloane’s bitch, he’s Irina’s bitch, he’s Sloane’s bitch, he’s maybe the CIA’s bitch. This, contrary to popular belief, does not pass as compelling character development. If there’s to be no development, cut him off. He’s becoming like a weird sixth toe or something—totally useless but flops around and looks kind of interesting…

Hitting that perfect emotional note one wants at the end of a scene in which your central focal point (in this case the Bristow/Derevko clan) have just machine gunned down a wall of naughty people in tandem is always a tricky task. Luckily U2 was there to provide both the perfect emotional and (that ever elusive) literal pitch, playing it loud and proud as our heroes “walked on” into the night.

Stupidest Hook Up: Tie! Will and Francie’s lobster-induced lovefest/Syd and Vaughn’s tongue lock in the rubble of SD-6!

Not only is it extremely professional to make out in the just-destroyed remains of your former evil place of employment, but then to ignore your fellow officers to continue tongue wrestling? Classy. And way better than, say, a first date. Or a peck over coffee. Or, you know, anything else. Which is why we really shouldn’t complain about Will and Francie—at least they had the dignity to make out over boiling lobsters and not fallen ex-comrades. And yet. We will. No good reason whatsoever. No chemistry. No explanation. And it wasn’t even useful for the plot. Evil!Francie could have done everything she did with Will even if they were just friends. For instance, it would not have seemed any more out of the ordinary for friend Francie to have called Will asking for recipes from bouillabaisse.com than it was for girlfriend Francie. I mean, it would have been freakish of course, but not any more freakish.

Biggest Cop Out: Tie! Irina not being evil/Will being alive!

Not that we encourage the death of Will, since he’s greatly improved from his original self, but if you’re going to have him shivved by what we hope is a fairly competent evil clone and left to stew for a few hours in a bathtub, you should probably have him be dead. We’re just sayin’. On the same front, if you’re going to build Irina up to be this huge, CIA-officer-killing, KGB-lovin’, The-Man-empire-running bad ass, you should probably follow through with it.

I know, I know, it was a close one. Between not!Francie leaving her clearly marked gene therapy pills laying around while constantly looking shifty and Vaughn just being a general pansy-ass, Syd almost had some competition here. Luckily her inability to compartmentalize (I don’t think that word means what she thinks that word means), keep a secret or figure out that her best friend of many, many years was actually an evil clone kept her in the lead. How that woman is still alive is beyond me.

Producer On The Most Crack: JJ Abrams!

A slot that I thought was safe for eternity in the hands of the Roswell producers, JJ surprised us all by quickly overtaking them and in fact stomping them into the dust. His clever use of evil genetic clones, Rambaldi, prophecies and spies who couldn’t compartmentalize had us impressed, there is no doubt, but his pulled-out-of-his-ass two year time jump just blew us away. We salute you, JJ, for turning a fun spy show into an angsty sci-fi show that’s just crazy enough to make Jason Katims jealous. And that is no easy feat. We are in awe. And want the name of your dealer.

*Note: there were going to be fantastic little awards, but sadly my stash of Popsicle sticks and glitter glue has depleted itself, so this is the best I could do. My apologies to the winners.

**Right. Since I just decided to do this in a fit of bitterness unequaled since Andrew started usurping Xander’s screentime, these were all decided by me. And maybe Kristen and Vanessa. Don’t know. Haven’t asked them yet. However, maybe next year we can vote!