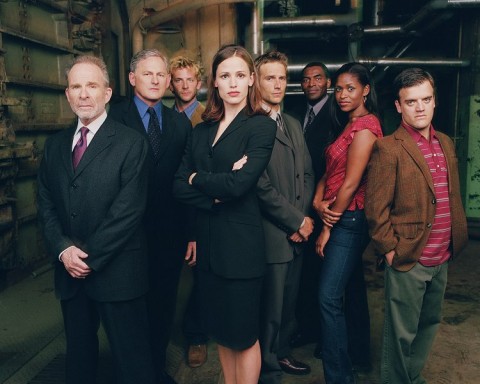 We’ve done this one up specifically for the Nikita-inclined. Get out your scorecard and play along…

SD-6: Not technically a character, but the catalyst for all of the characters’ actions. Well, all of the interesting characters’ actions, anyway. SD-6 is the covert ops agency that recruited Sydney seven years ago. All but five (oh, sorry, now four — one was sacrificed for the survival of one Miss Bristow.) of SD-6’s employees believe it to be a subsidiary of the CIA. In truth it is a rival agency run by ex-CIA operatives. They are bitter and mean. Like we said, shades of gray pleasantly absent.
It will never be Section One because: They’re outright evil, not just sort of evil. Plus they don’t have a Madeline. Every good covert group needs a Madeline. Also, they use conventional things like screens to show pictures and plans. Where are the random holograms of floor plans and bad guys popping up in every corner? Hell, even we could pull stuff up on screens. No tower for booty calls either. At least, not that we’ve seen.

CIA: Sort of self explanatory, yes? US Government, may or may not be evil. But certainly less evil than SD-6! Fond of double agents.
It will never be Red Cell because: It’s good. Sort of. Oh shush. It is the CIA. Oh, cut us some slack. You think this is easy?

K-Directorate Enemies of both SD-6 and the CIA. They are bad, bad people and are all about the killing. Supposedly they are damn good agents, but they have yet to knock off Sydney, her father or countless others that never think to use a codename. Anna Espinoza is linked with them.
It will never be Black Moon because: Well, maybe it could be Black Moon. Or Red Cell. We’ll hold our judgment for now.

Sydney Bristow: A young grad student that unfortunately fit a profile and was subsequently approached by SD-6. Requested field op assignment, effectively screwing herself over for the rest of her life. Currently pulling double duty as a double agent, attempting to help the CIA bring down SD-6. Though ostensibly doing this for the good of her country, she really is driven by a healthy case of vengeance, as SD-6 had her fiancée murdered.
Specialties: Running in stilettos. High spin kicks in tight dresses. Master of wigs, both long and short. Speaks many, many languages. Looks sassy in glasses.
Detriments: Does not carry a weapon. Is actually kind of a poor liar. Too trusting.
She’ll never be Nikita because: See above mentioned lack of long-legginess and blondness. Also, lack of emotional conflict. Has some sunglasses, but doesn’t seem to be obsessed with them.

Jack Bristow: Sydney’s estranged father, also a double agent. High up in SD-6, he is one of five in the agency that knows its true agenda.
Specialties: Looking sullen and hiding secrets from Sydney about her mother. Setting up others for the fall. Fond of using morse code while blinking.
Detriments: Sort of a stick in the mud, really.
He’ll never be Mr. Jones because: While he is Sydney’s father, he is in no way the mastermind behind SD-6.

Sloane: The head of SD-6 and one of the five four elite. Trusting no one, he stoops at times under the huge chip he bears against the CIA. He is slightly too attached to Sydney, leaving some to believe he may be her true father.
Specialties: Looking suave behind a monitor screen in the briefing room. Protecting Syd when her ass clearly should be cancelled.
Detriments: Too trusting. Happily had Danny offed.
He’ll never be Operations because: Does not wear turtlenecks. Has yet to ring in a booty call. And, well, really, no one could fill Paul’s shoes. Even if he did have the worst death scene ever.

Agent Vaughn: Does he have a first name? I don’t even know. Sydney’s handler at the CIA, he is spectacularly unprofessional and has gotten emotionally attached to his charge. He bought her a Christmas present. ‘Nuff said.
Specialties: Being cute. Like, really cute. Pissing off Sydney’s father. Pulling files he probably shouldn’t. Emotionally blackmailing his charge.
Detriments: Above-mentioned crush. Pisses off Sydney’s father continuously.
He’ll never be Michael because: He has an emotional range. His smile does not scare us. He could never fill out the Mission Pants. And fuck if he could pull off the mullet.

Marshall: Resident computer geek at SD-6. He builds cool gadgets! He’s quirky! As evidenced by his use of candy jars and blow-up furniture to make his office more inviting! Bloody brilliant, of course. Where do they find these boys and their toys?
Specialties: Creating cell phones and sunglasses that do simply fantastic things.
Detriments: Can’t seem to design a gun for Sydney. Has blow-up furniture in his office.
He’ll never be Birkoff because: My god, it’s Birkoff. And they killed him. You callously think we would try to replace him EVER? We’re not the cold-blooded producers of Nikita, people. Plus the new guy doesn’t have a headset.

Dixon: Sydney’s long-time field partner in SD-6. He somehow remains oblivious to Sydney’s double-crossings. May be K-Directorate. We’re not sure. We don’t think the writers are either.
Specialties: Ignorance and bliss.
Detriments: Well, he was stupid enough to stand there and get shot.
He’ll never be Davenport because: We would never get into fights over Dixon, claiming that each of us loves him more. Or is more loved by Davenport. *cough*Notthatwe’veeverdonethat*cough* And, Sydney will never run him over with a van. She doesn’t have it in her.

Anna Espinoza: Sydney’s number one non-fan, she works for K-Directorate and seems to pop up at the most inconvenient times.
Specialties: Cold-blooded bitchiness. Weapon carrying.
Detriments: Well, she looks blatantly evil. It’s gotta be hard to sneak up on people like that. Seems to lack the skills Syd possesses in the wig department.
She’ll never be the archnemesis that was a constant thorn in Nikita’s side because: Nikita never really had one. At least, not one that didn’t get killed within an episode.

Francie: Sydney’s best friend and now roommate. A civilian who thinks Sydney works long hours and gets the crap beat out of her while performing her duties as a banker. Engaged to Charlie.
Specialties: Making Will bearable in their scenes together.
Detriments: Forgetting that Sydney’s fiancée was recently brutally murdered.
She will never be that one friend Nikita had that one time because: As far as we know, she knows no one named Adrian and has no intention of drugging Nikita and taking her to their secret house in the boonies. But we could be wrong about that.

Charlie: Lawyer fiancée of Francie. He has decided to give singing a try.
Specialties: Being a lawyer, or so we’ve heard. Can sing.
Detriments: Proposed to his girlfriend IN FRONT of Sydney, who’s fiancé had just been killed. That’s cold, yo. Sneaks around.
He will never be the boyfriend of that one friend Nikita had that one time because: Once again, we’re fairly certain he doesn’t know Adrian.

Will Tippin: Another of Sydney’s best friends. A reporter who has a possibly unrequited crush on Sydney. Dallying with the underage office help to help pass time while he secretly investigates the death of Sydney’s fiancée.Has really, really annoying hair.
Melynee: Or not! Depending on whether one lives in the Bradley-Whitford-has-the-best-hair-ever! camp or not. As, y’know, we all should.
Specialties: Would do anything for Sydney. Doesn’t mean to be as annoying as he is.
Detriment: Irritating. Doesn’t know when to quit. Annoying hair that no reporter could ever afford. Looks way too much like Ben on Felicity.
He will never be Mick Schtoppel because: His character is nowhere near Mick Schtoppel. He has hair. The women don’t flock to him. [Melynee: Except, of course, me. And Jenny, the underage assistant. And Syd. She kissed him, remember!]
[Michelle: She was drunk! Drunk!] Plus, he’s missing that groovy cockney accent, yo.