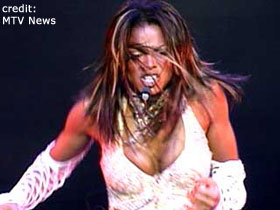 Having a housemate who works for the biggest radio station in the country can be, y’know, a good thing.

Like, for instance, when you get a call the last day of your vacation informing you that, should you be interested, it is entirely possible that upon your return home you will be presented with free opening night tickets.

And then it is a distinct likelihood that, upon gleefully accepting those tickets, you will show up the night of the concert to find out that, although they are not floor seats, they are, in fact, Quite Good.

After six *NSYNC shows in one and a half months, I had almost forgotten that there were other performers out on tour this year. I was torn between the excitement of seeing a concert that I didn’t already have entirely memorized, and a weird case of disloyalty to The Boys. As the concert began, though, I felt an odd sense of familiarity. About halfway through the show it hit me; it’s very clear now exactly how much *NSYNC learned opening for Janet on the Velvet Rope tour.

Y’all know I like The Boys, right? I mean, that can’t really be in question at this point. Here’s the thing, though: if you start with the PopOdyssey tour and you take away the fluff – mechanical bulls and all – you are left with the All For You tour. Not that *NSYNC is derivative. But Janet’s show is The Boys, distilled.

Maybe it’s a question of experience, or maturity. Or, er, class. Did I say that? Janet or her designers, directors, whatever managed to take the trappings of a rock concert and pare it down to the essentials: this woman and her incredible gift for entertainment. Much of the show took place on an empty stage, filled only with a shifting array of dancers, and La Jackson, herself. Instead of dividing the audience’s attention between myriad props and set pieces, focus was directed straight at the people inhabiting the space.

Which is not to say that the show lacked spectacle. Pieces of the floor dropped out, or raised the band ten feet in the air, forming a sort of cave along the back wall of the stage, through which elaborately costumed dancers would appear and vanish. Janet, much like The Boys, had a “toys” section of the concert. Only, in Janet’s version, this oversized conception of a playroom took on an eerie, carnavalesque tone, with thirty-foot high inflated jack-in-the-boxes, and the performers outfitted as gnomes, ladybugs, or wearing the feathers and beaks of waterbirds.

And let’s just speak about the costumes for a moment. Mr. Gerstein? JC? Wade? Whoever the hell has the affinity for or commissions from Dolce & Gabbana? Take a page out of Ms. Jackson’s book. The costumes were bright. They were unusual; they ranged from insects to dominatrix to Louis XVI-style powdered wigs and wide-hipped skirts. The colors ran the gamut of the spectrum: magentas, neon orange, turquoise. There were themes, and exaggerations and corruptions of reality. And yet: THEY WEREN’T UGLY. There was no sparkliness for sparkle’s sake-glitz was used as a means, not an end in itself, and with the simplicity of the set, the costumes didin’t have to fight for visual dominance.

Perhaps Janet’s assertion about her last name being Control is more than simple metaphor. It takes a strong sense of self-knowledge and confidence to know how to create a performance which can capture the imagination without crossing into overstimulation. It takes an awareness of boundaries, and the courage to walk the line between enough and too much. It takes control. It also takes restraint.

Speaking of. Part of the joy of knowing where to draw the lines is knowing when, and how, to blast them away. For those of you who haven’t yet heard the whispered stories sneaking out from concert attendees, here is my small piece of advice. Be a man, and by whatever skill/luck/obsessive-jumping-up-and-down-and-waving-your-arms you can conjure up, have the supreme grace and good fortune to be in Janet’s line of sight when she mentions how lonely she is up there on stage. All by herself. In her skin-tight, zip-up, leather catsuit. It will be an experience-should you manage to *ahem* make it through the wrist-tying, and pelvic grinding, and, um, mounting, and grabbing, and, and… – that you will not. Ever. Forget.

Which reminds me. How old is this woman, anyway? 30? Older? Could I please have her body – for a day? I’d settle for just a piece: her stomach, maybe. Or her shoulders. The cameramen kept shooting her from a low-angle, and the lights left a networked valley of shadow and light across her abs which rivaled the Grand Canyon. Bastages.

If I’m making this all sound like a well-oiled machine that was clearly planned and orchestrated down to the last detail…well, it was. But with the amount of money poured into concerts today, not to mention the effort necessary to coordinate the transportation, safety, insurance and efficiency of hundreds of people, along with untold tons of stuff, how can it be anything but? What I distinctly do not want to imply, however, is that with all of the planning and manpower necessary to coordinate the show, what it lacked was the critical element of fun.

Janet Jackson was a crucial part of my adolescence. Her songs followed the milestones of my growing up, and the things she sang about became the soundtrack to my life. I can remember climbing the diving board at a local pool one summer afternoon late in elementary school, the sound of someone’s radio drifting across the water, and me singing “Nasty Boys” under my breath. Or my first year in high school, having the house unexpectedly to myself one Saturday morning, bringing my radio into the living room, turning on “Black Cat” as high as it would go and screaming along. But I was never addicted to Janet in the way I became with other performers. Prince, uh, a certain boyband. I would sing along to the radio, seize the precious moments of MTV I was able to catch at friends’ houses to try to memorize the choreography, even emulate her fashion choices. I never bought all of the albums, though, and as the years passed she became for me more and more of an unexpected treasure: adored when found, but only discovered infrequently and mostly unintentionally.

As song after song emerged from the concert, however, an amazing thing occurred. I found that not only did I recognize with a profound thrill nearly all of the twenty-some songs she performed, but I could open up my mouth and miraculously let the words pour out. Until I heard the opening chords I had forgotten these songs existed, and yet without even thinking I knew exactly when to make a wish and clap three times in “Alright.”

And I wasn’t alone. All of Madison Square Garden was right there with me; standing on their seats, shaking their asses, and singing along. It’s a phenomenon you get familiar with, attending concerts, but it still sends a frisson of electricity through me to be experiencing the same excitement as 10,000 other people – who, unlike the teenie crowds at *cough* othershowsIhaveattended *cough* are not so busy screaming themselves hoarse over Justin’s hips that you can’t tell if they even know what he’s singing about.

Which is not to say that Justin couldn’t learn a thing or two from Janet. Girl can wait. She knows how to build tension and work a crowd better even than The Infant himself, who I had considered a master. In a section near the middle of the show, Janet brought out a stool and “reminisced” for a bit – singing through several of her older ballads. She closed with “Again,” from the Poetic Justice soundtrack – another song that I had no remembrance of until the moment it started, at which point memory washed over me and what seemed like every other person in attendance. All of the Garden sang along with her, breaking into screams as she paused at the climax of the song. And paused. And paused some more. And brought the microphone to her mouth, and then back down again as the screams doubled in volume. And paused some more. She must have lifted the mic five different times, and each time it seemed as if the screams could not possibly build in intensity. Until the final time, when Janet, knowing the crowd had reached its peak, dropped the last line of the song carefully into the hush she had created.

I know, I know. I make it through six viewings of The Boys with nary a tear, and lose it watching Janet do a ballad while she and Tupac fight on the screen behind her? What can I say.

Again, I’m sure I’m making it sound like she was manipulating the audience into doing exactly what she wanted them to do. Maybe she was. But she did it with such sincerity; she seemed overwhelmed and deeply touched by the depth and longevity of the response she was getting from the crowd. So, either she is an outstanding actress Poetic Justice or The Nutty Professor, anyone? or she was genuinely moved by the depth’s of the audience’s affection. How could it be possible not to be overwhelmed, standing in the middle of a 10,000-seat venue, with the entire place holding its collective breath while it waits for yours, there only and always because of you?

As I have mentioned before, this was by no means a teenie audience. To borrow a phrase from Amanda, Janet is for older girls (and boys). And it’s a shame, because the messages of her music – thinking for yourself, knowing your power and how to use it, speaking up, taking control of your own sexuality, and enjoying yourself – are ones which are not very well articulated by the current breed of pop princesses. So, while The Boys do seem to have learned something from Janet, it’s Britney and Christina, Jessica and Mandy who I wish would.