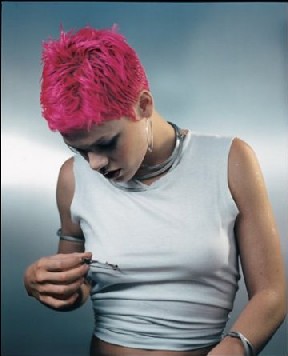 I’m sort of mad at Pink.

See, the first time I listened to her new album, M!ssundaztood, I got a distinct early-80s vibe from it. In fact, I felt very strongly that if one were to discover a long-lost John Hughes script that was conveniently the source material for The Thing Called Love, only set in 1985 and starring Rob Lowe as the deadbeat boyfriend of a runaway trying to make it as a punk rock musician… M!ssundaztood would have been the soundtrack.

Then I listened to it again, and realized that my assessment was a bit harsh (even if, strictly speaking, John Hughes and Rob Lowe aren’t bad things). It fucked up my analogy, and for this I am sad.

M!ssundaztood does sound 80s-ish, which we can blame on Linda Perry, the ex-4 Non Blondes singer who wrote or co-wrote most of the songs, and also produced a big chunk of the album. It also has a distinct Hughesian flavor, basking in the afterglow of teen angst, with lyrics containing all the sentiments that made Molly Ringwald a star. All things considered, though, it’s pretty damn good.

The title track opens the album, and is pretty much everything I like about Pink – whereas the first single, “Get the Party Started,” is not. She has this way of barely growling the end of every note without making you feel like she’s working too hard for it. “M!ssundaztood” is almost spoken-word in this regard, but the pumped-up drum track begs you to choreograph the video in your head, complete with shimmying, popping hips.

I like to think the second and third tracks are Pink’s homage to Top 40 pop music. In “Don’t Let Me Get Me,” she intones Tired of being compared/To damn Britney Spears/She’s so pretty/That just ain’t me. Pink then tears a page from the sparkly boys themselves with “Just Like a Pill,” in which she sings, “Instead of making me better, you’re making me ill.” Admittedly, the casual listener would probably miss the reference, but there’s no way I could. But then, I might be reaching for the obligatory *NSYNC mention.

Other noteworthy songs are “18 Wheeler,” which has definitely earned a place on my Angry Chick Music mix, and “Misery,” which features Steven Tyler in a gospel-infused cameo. The award for Lyric That Makes Me Want To Cry goes to “Eventually,” and the lines “What good am I to you if I can’t be broken?” The good news is that the rest of the song is worthy of that one bit.

M!ssundaztood is less successful when Pink reaches too far to create music for the dance club set. “Get the Party Started” and “Respect” lose the grittiness that makes Pink different from other girls who sing about buying their own bling like, say, JLo. It’s also touch and go when Pink gets confessional, like on “Family Portrait” (which manages to redeem itself with some tight harmonies at the end), “Dear Diary” and “My Vietnam.” But, hey, that’s why my discman has a skip button.

M!ssundaztood reminds me that Pink is still young and dealing with her sudden fame. It’s clear that she has relied heavily on her mentor Perry to help define her new sound, though the non-Perry songs are – for the most part – more spectacular. Pink would be better served latching on to someone like Tyler, who has already found his way in the industry, learned to stare down the critics and knows how much sentiment is too much.

In the end, if I may cling to my analogy, I would say that M!ssundaztood is actually a John Hughes parody, written by Cameron Crowe, set in 1994, staring Jared Leto and Cristina Ricci. It’s got a strong foundation, and it’s pretty to look at, but if you look too close you’ll find it to be somewhat void.