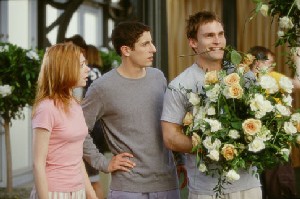 On the surface, American Wedding is about the impending nuptials of Jim (Jason Biggs) and Michelle (Alyson Hannigan).

Is that the best they could come up with to end the American Pie franchise? From the proposal – predictably involving an over-the-top sexual situation, as would befit the girl who masturbated with her flute – to the final “I do,” these two characters sadly lose steam with every scene. Jim and Michelle have almost zero chemistry, and Biggs cannot seem to overcome being the guy who fucked a pie… and super-glued his hand to his dick… and more recently, dumped his pubic-hair shavings onto his own wedding cake. Hannigan’s portrayal of Michelle has gotten more high-pitched and sappy with every movie, and as a fan of her other work (specifically, as Willow on Buffy the Vampire Slayer) I must admit that I wish this hadn’t been her breakout movie role. She’s better than this boring storyline, and she deserves better actors to play with (Seth Green, where are yoooooou?).

Really, though, this movie is about the redemption of Stifler (Sean William Scott), who spends 99 percent of the movie in asshole-overdrive, all for one tiny moment of forgiveness at the end. In Wedding, we learn that Stifler has become a high school football coach. He has fallen out of favor with the other boys, and because of his foulness, Michelle has requested that he not be invited to the wedding. It becomes his mission, of course, to weasel his way into not only the wedding, but also the wedding party. To this end he seduces Michelle’s sister and charms Michelle’s mom into giving him the wedding ring for safekeeping. Some hilarity ensues.

Half of the original cast chose not to return for the American Pie finale. Wedding is missing Chris Klein (Oz), Mena Suvari (Heather), Natasha Lyonne (Jessica), Tara Reid (Vicky), Shannon Elizabeth (Nadia) and Chris Owen (The Shermanator). I never thought I would admit to missing Tara Reid in ANYTHING, but with such a large chunk of the cast missing, this movie lacks the sense of camaraderie the other movies had. Worse, none of the missing characters are mentioned in Wedding, except for Nadia. It’s as if they never existed at all. That’s just poor scripting.

Even with all these strikes against it, American Wedding does manage to have some shining moments – it’s just that they are perhaps better saved for a video rental. In an attempt to find a dressmaker to create Michelle’s dream wedding dress, Stifler ends up in a gay bar, participating in a dance-off. Perhaps this is the key to making the character funny: Don’t give him any dialogue. Scott is fast, loose and fun as he shakes his tail feather to old-school disco tunes. Eugene Levy remains brilliant and true to the character of Jim’s dad. His pre-wedding advice to Michelle – leave the part about “boning” out of her vows – is both tender and hysterical. In lieu of old characters, Wedding introduces some new ones, including a gay man in assless chaps. It’s not classy, but it’s as good as it’s gonna get this late in the game.