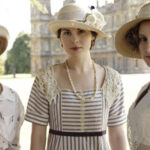 Sometime back in the fall of 2011, Downton Abbey happened. I don’t mean that the show premiered; it actually premiered in the US in the fall of 2010. But sometime back in October or November, what were little whispers about Downton Abbey all over my Facebook feed became shouts of "you must watch this!" Then around the first week of January, my social networks overflowed with … END_OF_DOCUMENT_TOKEN_TO_BE_REPLACED