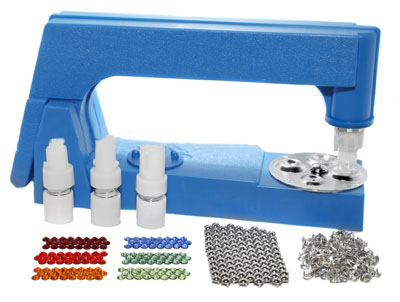 Don’t let anyone tell you different: the Bedazzler – once the provenance of late-night infomercials and junior high mockage – has, of late, become the discerning fashionista’s tool of choice. Or, at least, the discerning fashionista with a bunch of time on her hands and a significant DIY impulse. How else can you turn a simple handkerchief into a glittery masterpiece in the style of one Justin Randall Timberlake? Or inscribe the witty saying of your choice onto the body of those you hold most dear, without subjecting them to the tattooist’s needle? And there’s no better feeling in the world than being able to answer some jealous teeny’s anguished pleas to tell her where you found that kick-ass shirt – Hot Topic or Delia’s? – with those four lovely words: I made it myself.

But I assume that, having come to visit our delusional little world, you’re already well-versed in the joy that is the Bedazzler. You’ve succumbed to its tempting ways; perhaps purchased an item or twenty of clothing bedecked in its flashy glory. And now you’ve decided that the time has come: your My Little Pony shirt would look just that extra bit better if only the pony’s mane were streaked with diamond-head studs. Or maybe that concert tee you purchased the last time you went to see The Boys just won’t be complete until you give Lance a pair of sparkly, yellow earrings, I promise, it won’t. but you’re afraid he might end up with a couple of big, yellow pimples, instead. Have no fear! I, with my vast bedazzling experience, Heh. *ahem* am here to help, with a guide I inventively like to call…

The PopGurls’ Guide on How to Bedazzle

Once it’s all fixed to your standards, take the time to marvel at it for a moment. You did this. Where once there was nothing, you brought this beauteous masterwork into being. It’s time to celebrate: put on your piece of creative genius, and go make someone wish they could be one-tenth as sassy as you.