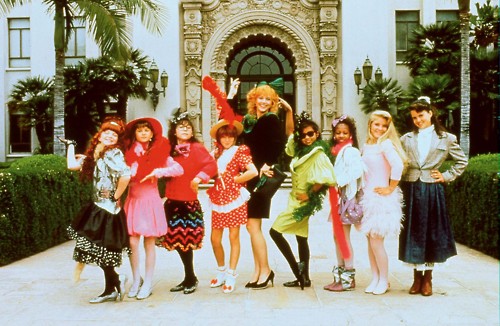 One of my least favorite phrases in the English language is the term “female comedy.” It’s the absolute worst. To quote Maya Rudolph, “I’ve been doing comedy for a long time and I never thought it was vaginal comedy.” To me, that phrase is a byproduct of the past ten to fifteen years, in which the “Can women be funny?!” question has, like the villain in a horror movie, simply refused to die and come back stronger every time a lady stars in a new comedy. Yes, internet commenters and writers of Vanity Fair trend pieces, women can be funny! And they very frequently are! And for those who think this is a recent development — that women just weren’t funny before Tina Fey wrote “Kotex Classic” and shattered the glass ceiling for would-be comics with vaginas everywhere — I’d like to submit this movie as a counterpoint: 1989’s Troop Beverly Hills.

TBH, much like another one of my favorite films, Drop Dead Gorgeous, is a cult comedy written and produced by women (Ava Ostern Fries, Pamela Norris and former Saturday Night Live writer Margaret Oberman). It has an almost entirely female cast, with the exception of Craig T. Nelson as a dad in the midst of a midlife crisis, and exists primarily as a showcase for the comedic skills of a post-Cheers era Shelley Long. For those unfamiliar with the movie, Long plays Phyllis Nefler, a pampered Beverly Hills housewife who agrees to become the new leader of her daughter’s Wilderness Girls troop to distract herself while going through a messy divorce. She meets resistance from a nasty Wilderness Girls higher-up named Velda Plendor (Betty Thomas, chewing scenery in a role that, were the film made today, would most certainly be played by Jane Lynch), but perseveres, and ends up discovering who she really is as she leads the girls in her troop to do the same. Also, there’s a lot of really fantastic fashion. Former SNL player Mary Gross is a standout as Velda’s meek right-hand woman, and Carla Gugino and Rilo Kiley’s Jenny Lewis are among the girls in Phyllis’ troop. Oh, and it’s actually pretty funny.

More importantly, however, is that this is essentially a movie about third-wave feminism. Seriously! The image-conscious, pampered Beverly Hills girls are mocked and called losers and bimbettes by Velda’s troop, the formidable, no-nonsense Red Feathers (a pre-nose job Tori Spelling among them). Yet instead of giving up and going shopping, they shrug off the criticism and simply work harder, eventually earning an invitation to the annual Wilderness Girl Jamboree, a camping and wilderness obstacle competition. Even after the Red Feathers lie, cheat, and sabotage their Beverly Hills rivals in order to get ahead, Phyllis and the girls push onward and — spoiler alert! — end up winning the whole thing, despite facing swamps, snakes, and a terrifying ravine. The central theme of the film, basically, is that femininity doesn’t outweigh virtues like kindness, fortitude, and ingenuity — you can be a strong woman who also loves to shop.

This movie obviously isn’t a perfect feminist text. If it were being made today, I can’t imagine that the screenwriters would stick with the ending in which Phyllis gets back with her asshole ex-husband after proving to him that she is Strong And Independent, for instance. But for a silly ’80s movie that played on the Disney Channel nonstop when I was growing up, it’s actually a pretty great example of movies that manage to be both lady-positive and super quotable. Come on, Hollywood — when are you going to go back to making “female comedies” that don’t have to do with weddings?

And seriously: those outfits. It’s khaki wishes and cookie dreams!