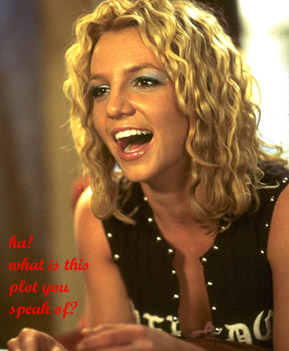 Discussing Crossroads over lunch with a friend, I said that it plays out like a bad fanfic written by a twelve-year-old. It’s predictable and drowns the audience in a sea of clichés. That isn’t to say it’s the worst movie I’ve ever seen. There are definitely hints of potential and some truly well-done moments. However, it tries too hard to be clever and intelligent only to come across as trite and so cheesy you can’t help your eyes rolling back into your head.

The gist of the film is that three girls, best friends when they were much younger but now completely estranged, embark upon a cross-country trip to realize the “special wish” they made a decade earlier. While on this trip, they come together and realize that they not only have rediscovered their special friendships, but have begun to find themselves. (Excuse me while I go in search of a Puffs Plus. Don’t want to chafe my nose with all the sobbing.)

Lucy (Britney Spears): A virginal valedictorian who has always done what was expected of her. Her mother left when she was a young girl and she’s been bearing her father’s pain for 14 years with little thought of her own.
Reason for Going: To meet her mother in Arizona.
The Dirt: Lucy actually has understandable motivation and character development in the beginning. It’s too bad they forgot to give her storyline any realism.

Kit (Zoe Saldana): The stylish, cosmopolitan one of the group. She’s hot, snobby and the center of the popular clique’s world. Her fiancé, who goes to college in California, has decided not to come home for the summer.
Reason for Going: To surprise her suddenly noncommittal fiancé.
The Dirt: How the hell she would consent to an engagement in the middle of her senior year is beyond me. She’s smart and sassy, the kind of girl who would want to travel and, you know, do stuff after she graduates fromhigh school – not the kind who would only be concerned with a big fancy wedding.

Ben (Anson Mount): Random older boy who Mimi knew from the trailer park. He’s the owner of the continent-crossin’ car and may or may not have gone to jail for murder. (Okay, he didn’t. I know you’re shocked.)
Reason for Going: Hmmm… I don’t remember. I know he wanted to get out of town, but he had friends waiting for him, maybe? And they were going to start a band? Yeah, that sounds good.
The Dirt: Probably the most realistic character in the entire flick. I liked him, even if I still have no fucking clue what his purpose was other than to do some stickshift action with both the car and Miss Lucy.

Reuters recounts that “the movie was reportedly met with laughter by London reviewers at a press screening last month,” and I have to say that was quite similar to my own experience. Stuck in the worst possible seats for a packed preview (second row, staring straight up into Ms. Spears’ crotch as she shimmied in her skivvies – that sounds more exciting than it should), we kept sane with a running commentary. And we weren’t the only ones. Save for a couple of young girls who were sniffling at the most!sweetest!movie!ever!, the rows in front and behind us kept up with our banter.

Let me just say here that I’m not a proponent of talking in films. In fact, I’m adamantly against it. I’ve yelled, threatened, gotten people thrown out of theatres for it, demanded my money back if the management couldn’t control the audience. But this, this was something different. A compulsion. I had to if I wanted to keep from ripping my hair out. I like my hair, it’s very nice. It’s got this nice thick curl to it and plays relatively well no matter how much I dye it. But I digress…

As I said earlier, this movie is a bad fanfic written by a preteen with an unrealistic and romanticized view of life. To begin with, I would have had a slightly easier time accepting this if it had been about three girls who had just graduated college. Lucy’s virginic awkwardness would have been a little out of character, but still believable. Mimi could have been the local community college chick if they wanted to keep her all poor and trashy. But it would have so helped out the Kit storyline and given her engagment a more plausible base.

There are so many more painfully improbable moments in Crossroads but I can only bring myself to address one of them: The Karaoke Bar. Unless you’ve been living under a rock, you’ve seen clips from the karaoke scene. Britney, all hot and trampy, singing “I Love Rock and Roll,” backed by Kit and Mimi. Some background on this: The girls all had embarked on this trip without the foresight of a travel plan or, what else was that semi-important thing? That’s right, money. Of course, the car breaks down right outside of New Orleans and they don’t have the money for it, yet Mimi whines about knowing what to do.

You see, there’s a karaoke bar in New Orleans where people perform and the audience pays them “what they think they deserve.” (I’m not even going to address the insanity of this plot device, considering they’ve never left Georgia and have been stuck on the side of a road for hours and yet Mimi knows all about this bar.) Anyway, the girls take over the bathroom (conveniently, no one else seems to need it) and change several times over; if I didn’t like my own hair so much, I’d want Britney’s. It goes from pin-straight to gorgeous corkscrew curls in a matter of seconds. Bitch. So, they go on. Mimi, who’s counting on this recording contract, gets stage fright and can’t sing a note. (I’m actually thankful I was spared from her horrific warbling.) Whatever will they do? Lucy to the rescue! She starts the song over from the beginning, swings around and straddles a pole like a natural, and the money comes rolling in. I’m talking well over a thousand dollars.

I want someone to explain that to me. Because I’m reading Little Miss Preteen’s AIM conversation now:

After someone makes me understand how this could actually happen in some not-so-alternate-universe, then I want to know who goes to a bar with fifty-dollar bills to toss in karaoke kitties. Because if this is happening a lot and they’re burning holes in pockets, I would be more than happy to hit a few bars in the future. And I may even sing the Scandinavian Viking song, which is worth at least a few hundred.

If they did it to get Britney all trampy and scantily-clad, they needn’t come up with such a debacle. It’s not like she doesn’t start off the flick dancing around in her bra and boy-panties. And isn’t gorgeous in another scene with matching bra and panties. There’s a lot of nearly!nekkid!Brit in this that the pubescent boy will be downloading and enjoying in the privacy of his own home. A lot. My point is, “No Karaoke No.” Only bad comes of it.

My head hurts. I will not think about realism and continuity anymore.

My main problem with Crossroads is that it can never seem to make up its mind. Does it want to be a comedy? A drama? Because let’s face it, the talent in here can barely pull off one, let alone both. (I’m not just talking about the actors here – the director’s main claim to fame seems to be that she’s the wife of Beastie Boy Mike D.) Why they felt the need to fit in a cornucopia of the following teen issues in one poorly written script is beyond me: teen pregnancy, teen marriage, date rape, first love, first sex, parent abandonment, betrayal, abuse. The editing betrays what must have been a number of reshoots, and the fact that they’d been testing it for months makes me wonder if they had drastically changed the direction and feel of the film. I think that somewhere along the line, the powers that be kept changing who their target audience is and what they felt that audience is prepared for. Yet another case of too many cooks in the kitchen.

There are unnecessary scenes in some parts, while others don’t have nearly enough development. For example, Kim Catrall’s much ballyhooed cameo as Lucy’s mother is so brief that I’d be impressed if she was on screen for more than a minute. A minute! There is no attempt to explain why she left or why she hadn’t stayed in contact, and the only conclusion is a very overly dramatic scene of Lucy crying in a hotel bathroom. And then there are bizarre connections that leave the viewer wondering what the hell the writers were smoking. (Major Spoiler The guy who date raped Mimi? It’s Kit’s cheating fiancé. Uhm, yeah. Exactly.)

And then the twelve-year-old returns with the infamous theme song:

She has to be stopped.

The truth is, Britney is not a bad actress. But the director (Tamra Davis) never seems to trust her or the script (Okay, I probably wouldn’t trust the script either) and throws in overly-dramatic scenes to kill any logical momentum. Zoe Saldana was quite good as the headstrong Eva in Center Stage and Taryn Manning, well, she seems to have quite the resume going for her. (I’m most amused, however, that she was a competitive rollerskater in the 80s. Did she have blades in her wheels like in Grease and take the other skaters out?) But the girls have a comedic chemistry together and it’s too bad that the movie didn’t scrap the ridiculous plot “twists” (which turned out more like, “Are you fucking kidding? How stupid was that?”) and go for the humour at the heart of it.

I sincerely feel that On the Line was a better movie simply because it had a sense of humour about itself. Sure, it was terrible script and the plot was improbable. At times it was so cringeworthy I had to cover my eyes, but it never tried to be more than it was: a comedy with a high cheese factor. That’s not a bad thing, really.

Which brings me to my issues with these popstar-driven films. Is there some god-awful screenwriter out there that every production company and their brother owes their life to? Or does the twelve-year-old have a deal with devil? I know there must be some decent scripts somewhere in Hollywood and they don’t need to keep producing this dreck. I understand not putting an untested popstar into an Oscar contender, but what is the reasoning behind making a film that should have been torched in the first place? While the built-in fanbase will probably guarantee a large opening box-office, it can’t completely defray the costs of shooting, editing, re-shooting and re-editing. Here’s a novel idea: Why not get a well-written script and then throw a few popstars in it. Maybe then it won’t be a film that falls out of the theatres after two weeks and people won’t be banging their head on the seat in front of them, praying “Dear God, let it be over SOON!” How about we try that next time?

My hair thanks you.