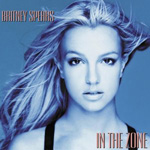 I always get kind of tense when an artist I like releases a new album. There’s little chance that anything new will stand up to the tried and true favorites that I’ve played countless times – either to cheer me, mope along with or just plain bounce to. And since there still is this derogatory connotation with all things pop in the world of music, I almost find myself fearful that if a favored pop artist releases a painfully bad album then everyone was right about my tastes; I should have my pop-listening privileges revoked. It’s funny how many people heard Justin Timberlake’s album and felt the need to tell me, an *NSYNC fan, that they were surprised at how much they liked it. I almost felt bad telling them that I didn’t, because they were finally handing over their validation.

When I heard Britney Spears’ first single from her new album In The Zone, “Me Against the Music,” I worried. A lot. Admittedly, I didn’t much care for “Slave 4 U” either – the first single from Britney – and it soon became such a beloved song of mine that I actually crave it. But “Slave” didn’t have the whole Madonna-hype hanging over it, with the implication that this song was so obviously the best on the album that they could barely contain it’s explosion as the first single. It’s a fine song, but nothing earth shattering, nothing that I think to myself randomly, “Wow, I really want to hear that song.” And if the first single was so unexciting, what did that say about the rest of the album?

Thankfully, not much. In the Zone is so freakin’ catchy that it hasn’t left my car CD player since I got it. When MTV.com’s The Leak played the whole album, I’d log on at work and let it repeat over and over. It’s got great numbers (“Toxic,” “(I Got That) Boom Boom,” “Brave New Girl”) that I can’t wait to hear in a club so I can properly bounce around on the dance floor. And then there’s “Breathe on Me,” which makes me want to quit bouncing and find a hot someone in a dark corner to slide up against. (Ideally it would be Britney in that dark corner, but hey, who wouldn’t want to groove up on Miss Brit?)

“Toxic” is one of the songs that absorbs me on every listen. It has a more distinct sound than the rest of the tracks and the violin manages to add a haunting layer to reiterate the irresistible addiction that Britney has to her lover. And I find myself seeking out “Brave New Girl,” which feels like a poppier version of Luscious Jackson’s “Naked Eye” mixed with some early Madonna vocals. “Breathe on Me” is a delicious track to chill to if, you know, you can’t find someone to groove with. The media’s darling ‘controversial’ “Touch of My Hand” is a decent chill song as well, although I find myself giggling at the chorus.

Even weaker songs like “Early Mornin'” and “The Hook Up” have catchy beats that I find myself bopping around to. [Amanda: Actually, “Early Mornin'” is one of my favorite tracks, and I think producer Moby gives Brit some street cred.] R. Kelly’s “Outrageous” could have been a standout if the chorus wasn’t so gratingly repetitive. And the ballads, the usual bane of my existence (especially the incredibly painful “I’m Not A Girl, Not Yet A Woman”), are kept to two: “Shadow” and “Everytime.” Both are surprisingly enjoyable. “Shadow” swells with such crescendos that I expect it to show up in a highly dramatic scene in the next blockbuster teen flick. “Everytime,” the song highly speculated to be the answer to Timberlake’s “Cry Me a River,” is striking and showcases Britney’s voice against an album of mostly overproduced tracks. (My only complaint is the odd dripping water sound that pops up from time to time. [Amanda:“Cry Me A River” has that, too, you know.]

Several reviews of In the Zone attack Britney for ‘not maturing’ and singing songs about topics already covered, because, apparently, the DiVinyls own the market on masturbation songs. (Don’t tell this to Cyndi Lauper, The Violent Femmes or Tweet.) If every singer had to write songs about topics never written about, then we’d be left with albums about kumquats and pistachio nuts. And I wouldn’t be surprised if there are a few of those already. I hadn’t realized that pop music was supposed to cure world hunger and enable world peace. I thought it was to evoke emotion, possibly make you happy and give you something to sing along to. In the Zone does all this.

As for Britney’s maturity, I think that my issue is not that she’s singing about ‘immature’ things, but rather the gauge used here is her sexuality. For all the interviews in which she explains her emotional growth, all we see is more and more songs about her sexual experiences. But if this is where the growing starts, I look forward to the continued exploration on her next album.