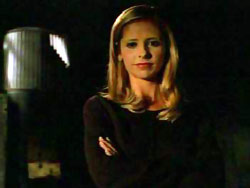 Amy: Okay. I admit it. I didn’t hate the Buffy Season Seven premiere. In fact, I actually kind of liked it. And I didn’t want to! I had pretty much decided after the last season’s finale that I was going to give up on the show, much like I had done with Angel. The storylines bored me, the writing was blah and the characters bore no resemblance to those I had once fallen in love with so many years ago.

Amanda: Me, too! In fact, my plan to skip this season was so cemented that I didn’t even realized when the premiere was going to air. If it weren’t for the assurances of friends that it was a good episode, I would have missed it altogether.

Michelle: I am the completely spoiled one here. I knew what was going to happen. I don’t think this affected how I felt about the episode either way. It was okay. Much better than all of last season. Nothing horribly fantastic and terrific, but it’s only the premiere. I did want to smack Giles and Willow upside the head, but I seem to be the minority there.

Amy: There were the interviews and soundbites from various producers, writers and cast proclaiming this season to be a return to the old, fun Buffy. That it would once again be witty and well-written. But I’ve heard those claims before, my friends, so they did nothing for me. I even managed to avoid all the spoilers out there, not by any sort of willpower, but because I just didn’t care anymore. The past two years have been weekly exercises in disgust – below the Buffy comic poster in my office, I tacked up a post-it note that reads “It was a good show once. Really.”

However, a friend had seen a preview of the premiere and said that it was the strongest premiere she’d seen. That it was true, the writing was snappy and smart, the characters likeable and actually seemed to like one another. Begrudgingly, I set the tape. And, surprise surprise, she was right.

Even with everyone being separate (Buffy and Xander in Sunnydale, Willow and Giles in England), there was a real sense of camaraderie. Buffy and Xander chatted about life as well as discussing the goings-on of the new high school. And I believed it! Willow and Giles talked about her actions and how she worried about the repercussions, or lack thereof. And I believed it! In fact, the potential sap in the Willow “recovery” was mostly avoided, (Although I got the “it’s all connected” theme the first time around. And the second. The third, fourth, fifth… well, we’ve found this season’s dead horse, I suppose.) and I noticed that they pretty much blew off the entire horrific magic-as-drugs storyline with Giles’ line about it not being an addiction nor a hobby for Willow. Oh, if it could only be so easy to forget the past two seasons in such a manner.

Amanda: For the last several seasons, Xander has shown up in the season premiere as someone completely different than what we saw in the end of the previous season. I think it’s interesting that they use the gap between seasons to grow him up, from no-job guy to odd-job guy to construction-worker guy to contractor guy. Sometimes I wish the viewer were more involved in his growing, the way we have been with Buffy, or even Dawn. I’ve also got to admit I was disappointed that there was no mention of Willow by Xander, or Xander by Willow. After all, it was their friendship that saved the world last year. (Once an issue, always an issue)

Those two things aside, though, I was pleased with the way the Scooby Gang seems to have moved into adulthood together. Giles feels even more like a peer in this episode, less like a father figure. The camaraderie between Buffy and Xander didn’t feel forced. And best of all: Nobody whined or threatened to cry!

Amy: I didn’t even mind Dawn, bane of the Scooby world. Aside from her “Lesson One: It’s Always Real” line, I liked her. And she got friends! (Of course, along with the “back to the beginning” theme, it’s another girl-girl-guy group, just like Buffy-Willow-Xander.) The zombie/ghost plot worked for me, and I must say I was amused by the minority reachout program this season. A Latino friend! A Black principal! And I won’t even start taking bets on how long it’ll be until either one is axed until at least the fifth episode.

Amanda: Is the principal evil, or will he eventually be controlled by evil? Why do Dawn’s new friends have thick discipline records? Is one of them a witch? Will the Latino friend get a crush on Buffy? I swear, this is the first season since Dawn’s arrival that I’ve actually cared about her character. And it’s also the first time since Season Four that I want to go out and find spoilers. That’s a good sign!

Michelle: I’m betting for evil. Or out for revenge. Why else would he know about Buffy? Why else would he be so gung-ho to hire her, when I’m sure there are plenty of other older, delinquent sisters out there just chomping at the bit for a go at handing out in detention! Chances are, he’s getting eaten.

Then there was Spike. Now, I was getting so frickin’ irritated with his character and what they did with the Buffy/Spike relationship that I would fast-forward through my tapes when it came to them. Because, once there was so much promise. Spike understood the dark place she was in, and was the only one she trusted to tell that she’d been ripped from Heaven to come back to a sort of Hell on Earth. And instead of working with such rich potential, they made it into some cheap sexual relationship, which did nothing but bore me. (Which is sad, because James Marsters is one DAMN hot man.)

But this Spike is striking. This is not the Angel we saw back in New York, this is a whole other kind of souled vampire. I loved it all – his mental disturbance, his delusions, his confusions, his simply not being prepared for what he thought he could handle. Being so overwhelmed that he tried to claw his newfound soul out. He reminded me of the glorious insanity of Drusilla – layered and conflicted and sure all at once. Buffy’s reaction to this new Spike mirrored that same shakiness. She didn’t quite know what to do, was torn herself between helping him and finding Dawn. It was so real, so honest. It was the first time I’ve been interested in watching the two on screen together in a long, long time.

Amanda: I can’t wait to find out what they do with Spike next. Is the Conglomerate of Bad Guys the next Big Bad, or is it a figment of Spike’s imagination? I found myself wishing desperately that Buffy would figure out what had happened to him. He was so pathetic when he left, but now he’s a whole new variety of sad and crazy. She has to feel empathy for him, and now he’s done away with all the excuses she used to push him away. Hell. I could root for this pairing! As long as it remains twisted and screwed up. It cannot be pretty.

Amy: Plus, there was minimal Anya interaction. I support that wholeheartedly. Sadly, I think this may not be a continual occurrence.

Michelle: Eh. Anya wasn’t so bad the last ep-and-a-half. Or maybe the last two or three. Sure, her wardrobe was truly offensive, and I’m glad to see the new costumer’s trying to fill Cynthia’s shoes, but her character as a whole improved. We’ll see if that holds. I am not holding my breath.

Amy: Of course, there are issues: The opening scene that was not explained or referenced in any way. The “Dawn the Vampire Slayer” bit that got brushed off oh-so-easily. (Let me say right here that should BtVS become DtVS, I will not be tuning in – no way, no how.) Anya’s god-awful shirt. The cringe-worthy hug that Kit gave Buffy at the end. The too-convenient position suddenly open at Sunnydale High.

Amanda: Right. And Buffy’s non-suspicion about said convenient position, along with the non-believability of Buffy being qualified for any sort of counseling job. Also, if the school was blown up and burned to the ground, how would Buffy’s old high school records have survived? Why does Buffy allow Anya and her cronies to hang around in Sunnydale, knowing full well that they will wreak havoc?

Amy: However, I’m still jaded. I don’t trust this change – I don’t trust decent plots, enjoyable dialogue and honest character interactions. Willow and Xander were the two main reasons I kept watching way back when (Buffy did, and continues to do, little for me), and up until now, they have been destroyed bit by bit each week. I want to trust that they will once again be more than a caricature and that I’m not going to cause myself mental harm for deciding to stick with it, but I can’t. It’s like I’ve been in an abusive relationship, being told, “I’m sorry. I love you, I won’t ever do it again.” After a while, you learn not to believe it anymore.

Amanda: I’m ashamed of my own complete willingness to believe that they’ll be able to turn things around. Watching this first episode, I felt myself getting excited. I felt myself speculating on plotlines and story outcomes. I felt actual fear from the ghosties. I felt myself falling back in love with Giles, and when Willow said, “I just want to be Willow again,” I felt a twinge of love for her, too. Perhaps I should line up volunteers to scrape me off the floor when/if it all goes wrong.

Michelle: I’ve come to the realization that I don’t really care if they improve it. I think I’ve accepted the fact that, for some reason I can’t fathom, I’ll watch this bloody show no matter what. Obviously I’m powerless. How else to explain me willingly sitting through Season Four?

Amy: As for now, I’m still going to watch. Give it the benefit of the doubt. Hope to whatever power above that Marti Noxon has been reigned in and is only a figurehead with no real decision-making authority whatsoever. Because, although I avoided most spoilers, I knew about the return of the past Big Bads. Didn’t know they were showing up in the premiere, but knew that they are involved somehow. And that final scene, as they all morphed from one into the other, ending with Buffy – I was captivated and had chills. And it was good.