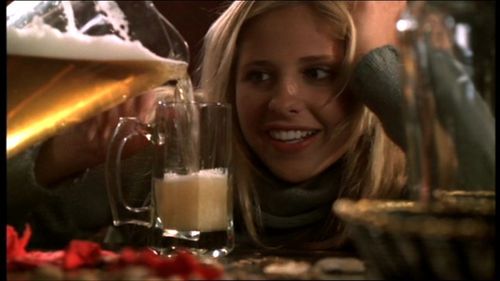 After a group-viewing of the hideous, craptastic Xander/Anya wedding, we realized that we’d be hard-pressed to make it through yet another episode of this once excellent show without some outside help. Because, people, we’ve come to a realization.

Buffy… our Buffy… our witty, funny, delightfully heartbreaking and sometimes disturbing Buffy is never coming back. In fact, to some *cough*Kristen*cough* she is already considered dead. Sure, technically, she and the show are alive and kicking but, really… it’s over. The puns fall flat, the stakes never seem to be high and the characters are, well, annoying. And yet we hang on. Why? Because we’re grieving, and chances are, so are you.

To help you through the grieving process, and the remaining painful episodes, we present to you the PopGurls’ Buffy the Vampire Slayer Drinking Game.

May the alcohol numb your pain.

Note: Michelle thinks these should be shots. Amy thinks that might very well kill some people. So, fine, whatever. Be sissies. For each of the following you take a sip of the alcoholic beverage of your choice.

Or a shot if you’re not afraid of a little alcohol poisoning.

And in regards to the lesbian (cuz she’s gay, didn’t you know?) Willow, whenever:

Xander would like you to take a shot any time:

Take a shot every time the ex-demon and unremorseful Anya:

Take a few shots, bang your head on the table, throw things at the TV – whatever helps you pass the time – whenever the show:

And last but not least, anytime Cynthia Bergstrom is given free reign and: