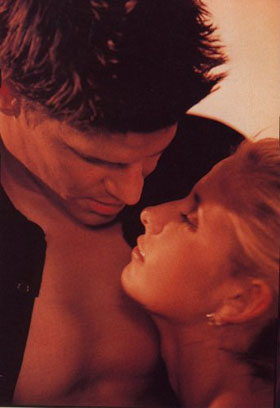 I’m supposed to be writing about B/A ‘shippers.

That would be Buffy/Angel ‘shippers, for the oblivious.

Problem is, I don’t know a whole lot about them, nor do I care. I’ve heard rumors about some of their antics (letter writing, sending chocolate to the production offices to commemorate the couple’s undying love, etc.). I have seen a few of their more gung-ho enterprises, like when they organized a rather large group of people to flood the Bronze posting board at Buffy.com with posts along the lines of “Riley sucks, he looks like an ape, Buffy only loves Angel” (in protest of Buffy actually dating someone with a pulse and, you know, having a life). But compared to the Dreamgirls (of Roswell fame), they’re freaking tame. I’m sure they haven’t always been this way, but I’ve probably just never really paid attention. Why? Because the idea of B/A creeps me out beyond belief, and I just can’t get beyond that long enough to listen to their arguments.

Setting aside the issues that make me wonder what the fuck Joss was on when he concocted this Wonder Duo, I would just like to say that I have never, ever bought the B/A love affair. I don’t care how many fan fics are written to explain it, or how many odes are composed to its glory. I just. Don’t. Buy it. Even in the middle of the second season, when they were supposedly so madly in love, I felt blah about it. There was no magic, no signs of undying love, nothing more than a girl with an overwhelming high school crush and someone way too old for her jonesing for some attention from a cute blond. Perhaps we were expected to take too much for granted, to assume that there was quite a bit of bonding and nooky going on off-screen. Unfortunately, that doesn’t work for me, and besides, there was way too much nooky going on on-screen. I can accept that we need to assume that some off-screen bonding happens amongst friends and Watchers and such, I’m flexible that way, and I’ve got a good imagination. But for something as twisted as this “eternal love” I need to actually see the bonding take place, so I’ve got something to explain and justify a 200+-year-old vampire with a soul dating a 17-year-old girl. Sure, she’s the Slayer, but have I mentioned that he’s a vampire? Meaning an animated corpse? And people not only condone this, but get upset and scream and cry when they break up, and have meltdowns when the characters move on to other, actually living, things? Does this creep anyone out but me? Just me? Huh.

And this, in case you couldn’t tell, is the part I find unsettling. It’s necrophilia people. Really. I can’t stress that enough. It’s illegal in most, if not all, states. When Buffy is kissing Angel, or holding him, or having sex with him, she’s being intimate with a dead body. What this means, if one were to think about it, is that he’s cold. He’s stiff. *snerk* There’s nothing goin’ on in there. He’s freaking dead.

See, I’m not getting past the dead issue anytime soon. But I think I’ve made my point about him being DEAD, and shall attempt to ignore said deadness. It’s probably best, because if I went any further it’s entirely possible that the whole “how does a vampire have sex when there’s no blood flowing to the nether regions” argument or the unpleasant question of fluids will rear their ugly heads and, really, I’m not up for nightmares tonight. Maybe tomorrow.

What I can – and will – get into is how insane it is to want these two crazy “kids” to get together. I’ve heard all the arguments people, what do you think I do at work? Work? Ha. Yeah, right. I know that Angel has a soul, and that makes him good. I know Buffy is not a normal teenager, and that her life entitles her to whatever happiness she can find and any unconventional lifestyle she so chooses. Great. Fine. No, really, that’s great. But, to be logical – yes, I am going to be logical when talking about Buffy the Vampire Slayer – he’s over 200 years older than Buffy. He’s seen the world, she’s seen LA and Sunnydale. He’s had a lifetime or two or three of experiences, she’s still in high school. Do you really think true love is going to keep Angel content? Do you really think Buffy would be happy to hang out in a crypt all day with the love of her life and have picnics in graveyards? Buffy may be demon-smart, but she’s not life-smart – not yet. She’s young, and she needs a chance to grow on her own. She does not need to be hampered down by a brooding, guilt-ridden demon in the guise of a man.

Because that’s what he is, a demon. Buffy kills demons. Should she really be dating one? Even if he is “good.” Total conflict of interest there, if you ask me. I don’t care if he has a soul, he’s a demon at the core. If the soul leaves, as it has from time to time, Angel goes evil. If the demon leaves, Angel’s unanimated corpse drops to the ground and shrivels up. Yum. Honey, I’m home. Which would, you know, bring me back to the whole dead issue, if I were going there. Which I’m not. I’m just sayin’… Some say that Buffy and Angel should be together because he can help her fight the good fight. Right, like he was doing when he snapped Jenny Calendar’s neck?

Yeah, thanks for the back up there, Angel.

People break up all the time – and not usually for a reason as good as the boyfriend turning into a blood sucking psychopath – so why are Buffy and Angel any different in the eyes of the ‘shippers? Why can’t they move on with their lives and compelling storylines? What makes their love so eternal? If you know, could you tell me? Because I totally missed it. I must’ve blinked or something. Oh, and just so you know, “because Joss says so” isn’t a reason.

[Amy: Yeah, I was over the B/A relationship before it even started. It bored me. I admit, I got into the show late, but I just did not see what all the bawling in “Becoming, Part 2” was about. Angel had gone evil: Done mean things to her friends, killed Ms. Calenda,r and wanted to open the world to a demon dimension. So, I see no bad in killing him. The fact that he was resouled at the last minute meant little to me. It just meant that Buffy wasn’t doing her job well enough: She should have killed him earlier.

And Buffy. Eh, she’s an annoying one too. No, that’s not true: She was fine the first couple of seasons. THEN she became, as Cordelia so eloquently put it, a whiny little cry-Buffy, with no regard for her friends or her Watcher. She was all-consumed with Angel.

Someone she has NO chemistry with.

Seriously. I was a Willow/Xander ‘shipper from the very beginning – and not completely because of my over-identification issues. They had chemistry – you could believe that they had an actual interest in each other aside from the bump-and-grind. And since that’s a scary image all around, I’ll drop it.

I get it – a Romeo and Juliet thing. Sure it’s nice when it starts out – gives people a reason to get sucked into a show. But once the first season is over, that reason is a whole lot less compelling (see Roswell). Dragging it out over five years is simply agonizing. I hope that after the Buffy-to-UPN jump we won’t have to endure this any longer.]

Oh, yeah, dragging it out. Right, forgot to cover that, didn’t I? How ridiculous was Season Three? It got to the point where I got up and left the room anytime a B/A scene came on. I don’t understand forcing the pain and heartache of having to listen to those two whine about their love when everybody knew he was leaving at the end of the season to do his own show. Bloody hell Joss, you could’ve had a little mercy on our souls.