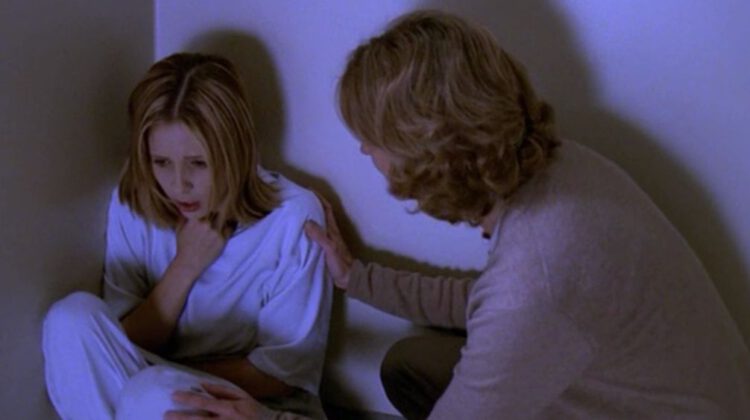 Not by the Anya/Xander storyline. Not by Willow. Or Dawn or Xander. By Buffy. I’m actually intrigued by Buffy. I know, I know, I just wrote her off! However, if the end of “Normal Again” is ever followed up on, I could almost be happy again.

Earlier this year it was promised that the show would deal with Buffy being in Heaven. Or, at least, what she thought was Heaven. If the “Normal Again” ending was what they were talking about, hello debate! Is this true? A twist that enrages some and enthralls others, and forces still others to write it off as a bad Charmed or Star Trek clone? Something worth debating in the Buffyverse besides Spike/Buffy sex? Who knew?

But think about it. Buffy said, granted she was drugged, but she said that when she first saw a vampire her parents took her to a mental institution. Now, kicking aside that this is probably something we would have heard about before, at least in the form of some bitter joke, wouldn’t this mean that Buffy really was still the Slayer? Locked in an insane asylum? Imagine being 15 and faced with the horrifying reality that the rest of your life, the rest of your now looking-pretty-short life, was to be nothing but death. Fighting it, stopping it, running from it…Now imagine that you tell the two people who, no matter what, are supposed to love and protect you. And how do they respond? They put you in a mental institution. Unable to deal with her new reality and the betrayal of her parents, Buffy sinks deeper and deeper into a fantasy world where she rules.

Insane? Doesn’t make a whole lot of sense? Leaves a lot that can’t be explained? True, but we’ll get to that later. Let’s explain how things that annoyed me at one point can now be explained by pulling out the minimal knowledge I retained from Psych 101:

In fact, all of the recurring themes of abandonment were nicely explained in one “is she or isn’t she” episode. The growing absurdity of the Buffyverse (“circus folk” anyone?) could also finally be accepted. Her lack of Slayer strength and her ever changing powers, not to mention the ever-changing abilities of the vampires, may be due to fluxes in her mind. And like Spike said, she’s addicted to the misery. Why not make her fantasy life hard as fuck? I really have no idea why she would keep setting herself up with vampires, or why she would continually have Willow declare her lesbianism out loud continuously, but the human mind works in mysterious ways. The insinuation that Buffy, rather than being in Heaven, was instead coming out of her psychosis was an interesting idea. She sacrificed herself to be free, only to be sucked back in by a relapse. The weak point being, of course, that the mental institution wasn’t really her ideal world or Heaven. But with her parents around she would have felt warm and safe…it could go either way, really. Which, of course, is the point.

However, I am inclined to believe that it was the poison. Why? Not for the obvious “because it would be stupid and piss off the fans if it was all a dream” reasons. Not for the new holes it opens up as it closes others. (Like why, if it’s Buffy’s psyche, do we see the lives of the others? This doesn’t bother me though, gentle readers, because I know that fantasy lives can be rich indeed.) Rather, I’m inclined to lean towards the Buffyverse being real for several reasons.

First, if they had wanted this to be a question throughout, it should have been brought up earlier. An interesting side note about “Normal Again” is that spoilers for this episode came out at the beginning of the year. It was supposed to be the eighth episode of the season and was pushed back. The only question is why? An episode’s placement in the season is crucial, especially in a show like Buffy. It’s hard to give the weight to this episode that I think the producers might like, solely for the reason that it came so late in the season. Will they follow up on it? Will they leave it to everyone’s discretion to decide what’s real and what’s not? Will it haunt us forever, like the question of “where the hell did Angel’s ring go, anyway?”*

Secondly, it fucks with Angel. Not that I think they especially care, since they have tried so hard to separate the two, but the fact remains that the shows are indelibly linked. You make Buffy imaginary, you make Cordy, Angel and Wes imaginary too. And what the hell do you do with that?

Three, this isn’t exactly a banner episode for fighting mental illness, if the heroine chooses a world of hurt, violence and anger over fighting the pain and returning home. Buffy hates herself right now, her life is a mess and she can’t explain why she does what she does or feels what she feels. She needs a way out, a way to believe that it’s not her. She said it herself-this can’t be her. She needs an excuse, a fall guy to make her feel better about herself. The demon’s poison enabled Buffy to find that excuse-it’s not her. She’s not real. Her actions are all in her sick mind. What better way to excuse anything you’ve ever done that’s bothered you? She never did any of it! She’s not a disgusting person anymore! But her disgust with herself and her need to get back to her life was too strong even for the mysterious poison.

Her will to go back and right what she felt was going astray manifested itself in Joyce’s final, rousing speech. It’s what Buffy needed to hear, her mother telling her she was strong and that she loved her. Call it a goodbye. Buffy was never allowed to say goodbye to her mother, it was too sudden. Her mind had to help her find peace with it somehow. It seized this opportunity, giving Buffy what she needed to go back and make herself right. She is strong. She can do this.