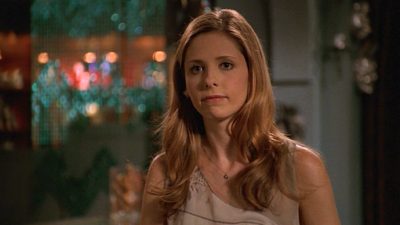 The Buffy season six finale was, to put it bluntly, two of the worst hours in the history of the series. It was the culmination of a season more terrible than The One With The Initiative, and even worse than The One With Claire Kramer. If there was ever proof that the show should have died along with Buffy, this finale was definitely it.

Like all television shows that start to suck over time, Buffy suffers from a lack of focus on the central characters. It’s a small ensemble cast that turned into the fucking Rockettes chorus line, without the syncopation. And where once the cast members were a little bit in love with each other and their jobs, they now wear constant masks of disinterest.

Who can blame them? The writing, once sharp and clever, is now one-note and tired. In the name of exploring “big issues” (drug abuse, lesbianism, adulthood) the story arcs have become completely contrived. Anyone with an ounce of self-respect would be disgruntled if that’s what you were faced with at your job, day in and day out.

Unfortunately, Buffy lives and dies by its characters, so its possible the show is as good as dead. We’ve said this before (LINK “Buffy Bitching”), but the once-depth of the characters is the only reason we were able to overlook the silly show title and the dumb-blond-fights-evil premise. Now that Giles and Co. are shallow, and hollow and other words meaning “without substance” why would anyone watch?

Buffy
Was she even in this episode? Seriously. I’m wracking my brain, trying to come up with one substantial thing she did for the entire two hours. She ran a lot. She kicked and punched and fell in a big hole. Then, because clearly someone likes to torture me, she cried. When she told Giles that she understood why he left, that she thought it did help her take control and responsibility, I couldn’t help but wonder: What? She hasn’t taken control, she hasn’t really taken responsibility. She had a lot of sex with Spike that I didn’t need to see, her sister turned into a klepto, and her best friend bought a one-way ticket to Wicca rehab. I fear the day Buffy takes actual control.

Willow
I take the character assassination of Willow personally, and I hold Joss Whedon responsible. He obviously did not love her as much as I did, or he never would have abandoned her to Marti Noxon, et al., who turned her into a schizophrenic, selfish, unlikable bore. Yes, I said “bore.” Because no matter how much black flouncy goth clothing Willow wears, and no matter how many times she flings fire and lightning out of her hands, her character was so fucking dull this season. The finale, especially, was full of bad puns (the really bad kind, not the bad-sort-of-funny kind) and flat dialogue. I can’t believe that, after all these seasons, the best reason they can come up with for Willow’s sudden desire to be all-powerful is that she is tired of being second fiddle to the Slayer.

Xander
Oh, Xander. I know that I’m supposed to be really excited, because Xander stopped the Big Bad without having any superpowers or special skills. I know I’m supposed to be all gooey that his love for Willow saved the world. (All we need is love, yo, just like John Lennon said.) But it’s too little, too late. If Willow would have gone all evil three seasons ago, it’s possible that I could have maybe bought it. Back when she and Xander were actually friendly, or actually seemed to care about each other. Not a single part of me got melty when Xander said that he wanted to be with her if the world was going to end, that he loved her, that he wouldn’t desert her. It’s a true low point in my fangurlieness.

I also feel the need to point out that Nick Brendan’s neck continues to get larger every season, until now it is roughly the circumference of his head. His hair, too, continues to be greasy and floppy. And his acting. Well. Remember when we said everyone was bored? No one is more bored than him.

Giles
Did anyone else think that Giles wanted to die on the Magic Box floor? Anthony Stewart Head sure did. Lying there with his upteenth head wound, you could see it in his eyes: “Why did I come back? This show is a fucking sinking ship. In ten minutes, I’ll have to recite inane dialogue about a friendship that doesn’t even exist. Maybe the ceiling will fall on me. Come back, Evil Willow! Come back!” I wanted more from Giles. I wanted him to finally remind Willow – and everyone else – that he’s been where Willow is now, and he’s paid the price. Why has everyone forgotten this? I’ve said all along that the Willow storyline would be 800 times better if Giles had been around. The only time it was good was in the one scene last season where he confronted her and called her a stupid little girl. I needed more of that. A whole show of that. An entire show of Ripper in faded blue jeans, getting angry and getting his hands dirty. But they’ve let Ripper die, and Giles should have died in the rubble.

Spike
So the real question is: Did Spike go to Africa (god, that’s so stupid, it hurts to say it) to get his chip out, or did he go to get his soul back? Did the demon take Spike’s, “it’s time the Slayer got what she deserved” to mean “the Slayer deserves me with a soul”? Did Spike intend to be made human again? Can James Marsters possibly spend more time with his shirt off?

I’m a fan of Spike getting his soul back, but only if it happens one way. He cannot be moody boy about it. What I want is for Spike to remember all the people he killed and say, “Oh, well.” I want him to be the proof that some beings with a soul are bad to the bone, just as some demons are do-gooders. I think he’s still a bright spot in the show, and not just because he’s so pale that his naked chest glows.

Anya
Why. Why. WHY is it okay for Anya to still be around now that she is a demon again? I realize that Buffy has always tried to teach the Different Strokes for Different Folks approach to demonology. Angel was okay at first, because he had a soul, but I’ve always maintained that he should have been killed once he went bad again, whether or not they were able to restore him. He had proven that he was a risk. Spike and Anya pose the same problem. Now that Anya is a demon again, now that they know she’ll be off practicing her vengeance whenever she gets the call, why would they want her running Giles’s business, or hanging out with Dawn? What happened to the Buffy that killed characters off when they had outlived their welcome? Grr.

Dawn
Dear Evil Willow: Please turn Dawn back into a glowing ball of energy, and banish it to the nether regions of wherever you send such things. Kisses, willa.

Halfway through the two-hour finale, watching everything unravel at such a slow pace, I made a deal with the other two people in my living room. If Giles dies, I said, I will feel free to never watch this show again. Then I prayed for him to be set free from the retchedness. And then he sat up, and I cursed, loudly. Because, apparently, I have anchored myself to this show, and if Giles is going down with the ship, I’ll be tuning in next season to watch it.