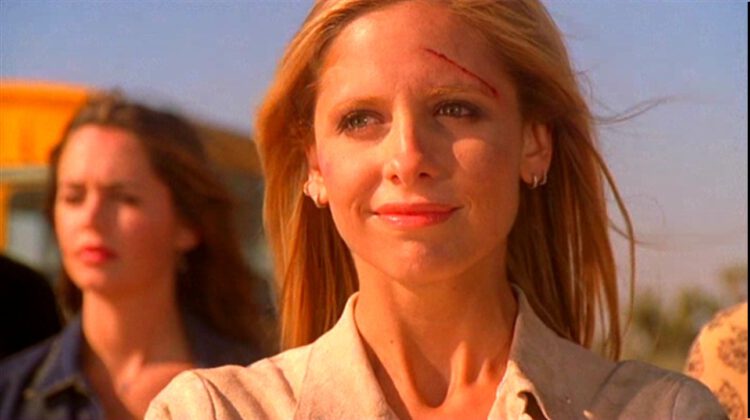 How did we feel about Buffy the Vampire Slayer at the very end? In a word: Underwhelmed.

Melynee: And in a surprising turn of events, I was pleasantly surprised by the End o’Buffy.

One of the best side-effects (aside from making me miss my academic-paper-writing days–what’s up with that?) of writing our series-end collection of articles here at popgurls may be that I went into the final episode with pretty darn low expectations. When you’ve just spent untold hours compiling the Worst that Buffy has to offer, and then you have to try to anticipate a potential Heh. ending to the deviousness that is Whedon’s brainchild, it leaves you realizing that there’s only so much you can expect.

Yes, the moment between Buffy, Giles, Xander and Willow in the halls of Sunnydale High was too short, but, my god, at least we had it. It’s taken three seasons for the relationship between these four to degenerate to its current level, did anyone really think it could be fixed in one episode? At least we were able to see, for a minute, the joy that these four brought to each other. Barring the impossibility of W/X smoochies, this was all I wanted.

I was completely and totally unspoiled, and never saw the raising of the Potentials coming, which was all I needed in terms of a surprise ending. I had a minor quibble with the wording of Buffy’s “You’ve got to choose” speech–the choice was not whether or not to get raised, as the empowerment happened, globally, whether anyone wanted it or not, but rather whether or not the potentials would use that power–but I’ll admit it right here: I’m a feminist sap, and the raising montage got me sniffly. Where else on television will you find a thirty-some character fight sequence composed almost exclusively of teenage girls?

Most importantly, Buffy finally recognized she’s not the only Chosen. Hallelujah and Amen! The whole series is based on Buffy being set apart, and since Season Two and the introduction of a second Slayer, the only reason she’s been that way is because she’s, pardon the expression, chosen to be. Finally, finally, face-to-face with the First-as-herself, she recognized that fact, and changed it. This was the real surprise, and all I needed to make the ending worthwhile.

No, the episode wasn’t heart-wrenching. But the only thing that could have made it so, for me, was the death of Willow, Xander, or Giles, and killing of one of these three simply to make the ending heart-breaking would have been a truly cheap shot, unworthy of seven-seasons-worth of loyalty.

There was no Buffy-whining. Willow got over her magic issues without resorting to outside assistance. Okay, Buffy made her patented crying face, Kennedy was there, and Angel conveniently forgot that the woman he’s loved for the last season and a half is in a coma, but did anyone else laugh more at this ep than they have in any other single episode this season?

I knew there was no way Joss could make the show what it was in Seasons Two and Three, and that’s kind of the point. Characters, as much as we may love their early incarnations, can only remain interesting as they change. They’re supposed to be different people now than they were when they started. But by giving them that time, from the place that they are, to recapture something of what they were, this finish was just exactly as bittersweet as I hoped-but-didn’t-expect it to be.

Amanda: As an early fan of Buffy, I used to live in fear that the show would get cancelled each season. Regardless of its status as a critical darling, it didn’t get the ratings that its once lead-in Seventh Heaven saw. Thus, around episode 22 of every season, I would think of all the things I wanted to happen before the show was cancelled. It was fear that drove me, real fear. Because Buffy had characters that I loved, and anything less than a perfect ending would not do. This year, when writing my part of the “If We Wrote Buffy” article, it became apparent that I didn’t believe – in my heart of hearts – that I would ever get the perfect ending. I wasn’t wrong.

By the end, Buffy was too big and too scattered to find solvency in one hour. (Whose idea was it to have a finale only an hour long, anyway?) “Chosen” should have been longer, or at least the end of a two-part episode. Things I could have done without:

That’s not to say it was ALL bad. Andrew continued to be a bright spot (although I would have given him up in a heartbeat to have more, less-forced, Scooby Gang interaction). Willow’s line about Buffy being cute, but not so smart – genius. The scene where Buffy and gang walked down the hall, each peeling off into another room or hallway…almost was touching enough to forgive the round-robin scene before it. I even think that, all things considered, the Sunnydale-goes-Grand-Canyon ending was a smart way to get rid of the Hellmouth once and for all.

“Chosen” brought me no closure beyond the freeing up of my Tuesday-night TV- watching schedule. It’s a good thing that, all these years, I’ve been preparing myself for this inevitability.

Amy: So that was it, huh? I mean, I wasn’t shocked – as I had gotten the script from Michelle a good month in advance and had had several conversations about our disappointment and what they should have done instead. So, in return for talking her down from many “they’re leaving on fucking BUSES! BUSES!” rants, she got several phone calls as I watched the downloaded episode on Tuesday afternoon. Because it’s one thing to read what’s going to happen, quite another to hope against hope that Joss really did leak the script to throw off the spoiler hounds and was going to shock us all with a gorgeous, touching episode. It didn’t happen.

Don’t get me wrong – I didn’t hate it. I laughed a few times, enjoyed Faith being called on her attitude by Wood, and Andrew was great. Sarah playing Buffy and the First Evil was very well done.The D&D game was a stroke of brilliance – reminding me of the show I used to think was so smart and fun.

But there was so much wasted time on unimportant things – Willow and Kennedy, for example. That scene alone was worth two grumbly phone calls, though I think it wouldn’t have warranted any should it have been Willow and Xander, or Willow and Buffy. (Oh, but then they wouldn’t have been able to add in yet another groanworthy reference to their sex life. We. Get. It.) The Buffy/Angel scene was a bit flat as well, although it gave us the “Are you going to go all Dawson on me every time I get a boyfriend?” line, which was fantastic.

I have a serious problem with the sharing of power with the potential slayers. The idea is intriguing, but the actuality of it needed more development. While I admit that I did like the scene where the girl stopped the person from beating her, the action itself is irresponsible. They were not given a choice. Yes, I know, neither was Buffy, but she at least had an idea of what her power entailed. These girls, these children, have no one to turn to and no one to explain the power that they suddenly feel. We’ve met three slayers: one that does things by the book, one that does things her own way and it usually works out, and one that does things her own way and was corrupted by her power. Multiply that by thousands – thousands of girls who now have this power and have no idea what it is, what it means and how to use it – and it’s a very dangerous thing. They will not all be like Buffy.

There were so many loose ends left lying around to trip over. Here’s a few:

Finally, I will continue to ache for the lack of Scooby interaction. I could go on and on here, but I won’t. I’ll never stop and I’ve ranted on this enough.

I wanted to love this. I wanted to be swept in and wrapped up and come out the end either sobbing for the story or for the story’s end. Instead I only felt sad that I wasn’t even remotely emotional for the end of a show that once brought me great joy and great love. In my office, I have a poster from the old Buffycomic book. Underneath is a yellow post-it that reads: “It was a good show once, really. Really.” That will forever be its epitaph in my eyes.