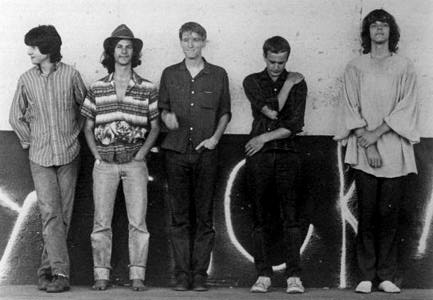 Way back when there really was a discernable difference in “alternative music,” I came across this odd little television show on MTV. I would rush home on Mondays to watch the tape I’d set the night before – 120 Minutes of videos by artists I’d never heard of, and certainly had never heard on the radio. From Kevin Seal to Dave Kendall, random guest hosts and college radio updates – it was a musical world so very far from the one to which I’d been accustomed.

At one point, I became completely entranced by this strange little ditty with an incredibly haunting violin solo. “Pictures of Matchstick Men” by Camper Van Beethoven. I’d play the video over and over, shaking my head along with Morgan Fitchter’s fiddling. The song was a hit for the band, which is probably why I was actually able to find the Key Lime Pie tape in my local music store not too much later. It was all I listened to for months – fell in absolute love with “All Her Favorite Fruit” and “When I Win the Lottery,” disappeared into “Come on Darkness” and “Sweethearts.” I’d read the liner notes over and over, most of which talked about shoes and who wore Doc Martens during the recording of the album.

So recently when I found out that they were going on tour, I squealed like a little girl. Now, I am by no means the biggest CvB fan and do not claim to be – aside from the occasional dalliance with Our Beloved Revolutionary Sweetheart, I’ve listened to almost nothing other than the tracks on Key Lime Pie. But they were so influential to my life in that period of time (and, I think, my writing now) that I had to see them. My little 15-year-old self demanded it.

I dragged my friend Lance along and we found our way into the packed Irving Plaza. We felt young – really young. Which, I suppose makes sense since CvB were big on college radio stations in 1989. The average age of the fan back then was probably about 21 – making them almost 35 now. Although many seemed much older than that. Anyway, throughout the first set, a group of giants set up camp right in front of us. I’m 5’3, Lance is 6’0. We couldn’t see over them. Needless to say, I was fairly annoyed. And I was already in a dour mood to begin with.

Camper took the stage a little after 9pm and there was this mellow, yet strong sense of separation between the band and the crowd. A few songs in, and David Lowery finally started talking to the audience instead of talking through a digitized computer voice, that wall broke down a bit more. I, for one, was very happy that he dropped the mechanics – there’s something about Lowery’s voice that permanently etches itself into your brain, much like Robert Smith or Richard Butler. It’s so deliciously melancholy and cynical that you never doubt the sardonic verses flowing from his lips, yet are not surprised by the occasional subtle love song.

I thought it rather illustrative of the band’s attitude that their biggest hits – “Take the Skinheads Bowling” (which has one of my favorite.lines.ever: Everybody’s coming home for lunch these days. Don’t ask.) and the aforementioned “Pictures” – were tucked in the middle of their respective sets. Whereas any other band would save them for an encore, or wait until the audience was all good and riled up, they tossed them out as if they were beloved B-sides. Which, of course, the crowd snapped up enthusiastically. In fact, almost every song was met with a similar passion – from the instrumentals to the hits, from the ones you kind of remembered to the ones you’ve never heard before. I admit, I may have gotten a bit sniffly during “All Her Favorite Fruit,” and I was pretty surprised at how easily the words to “When I Win the Lottery” (a song I haven’t heard in 10 years, easily) came to memory.

During intermission, I sidled up to the front where I was away from the giants, but forced to reckon with some moshing kids and an older woman who had no rhythm whatsoever yet awkwardly danced the entire time. I was so enthralled with the band – their camaraderie, the way they all took turns in the spotlight yet most of the time played side by side in a line across the stage. By the end of the show, I wanted to jump in a car and follow Camper on the rest of their tour.

There are very few bands from that era that I would rush out to see play should they go start touring tomorrow. (Honestly, there are very few bands from today that I rush out to see.) Why Camper van Beethoven latched onto my soul, possessing this piece of me for over a decade, I’m really not sure. But they’re brilliant and they make me happy and it’d been a long time since I’d had so much fun packed into three hours. That night, it felt like something came full circle and I reconciled the wanted-to-be-hip girl I once was with the so-not-even-close-to-hip gurlie I now am. It’s a weird thing realizing that you’ve grown up, but it’s kind of comforting to know that, sometimes, you can go back again.