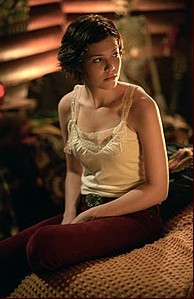 Romantic comedies aren’t rocket science. There is a fairly straightforward formula nestled snuggly into the details – attractive actors, foreign locales, and wacky sidekicks. Chasing Liberty is no different, but it’s certainly the little details that make it worth watching.

Mandy Moore, retaining the title of Cutest Girl In The Entire World, continues to choose the role of good-girl-goes-mildly-bad as Anna, the daughter of the President of the United States (Mark Harmon). Anna’s Secret Service code name is “Liberty,” hence the catchy movie title. She’s feeling all grown up at 18 and wishes that the Secret Service, and her dad, would trust her to take care of herself on the occasional social outing. Anna is eventually driven to rebel during a trip to Prague, and it is in the middle of this rebellion that she meets the Boy (Matthew Goode).

Let’s stop right there and point out that relative-newcomer Goode is tall, muscular and sporting an authentic British accent. He’s also got a genuineness that oozes from the screen, which makes his character Ben way more charming than the mediocre script actually allows for. Ben’s secret – he’s an agent working undercover for Anna’s dad – is revealed early on, so the audience is well aware of why Ben resists Anna’s charms for as long as he does. Goode makes those scenes excruciating, though, because the audience wants him just as much as Anna does.

Anna and Ben travel from Prague to Venice to Berlin, learning about each other as they go. There are the usual hijinks – they encounter a pickpocket, run out on a restaurant bill and pretend to be married to get the sympathy of a silly gondolier – and through it all Anna’s main Secret Service agents, Weiss and Morales, pursue them. They also pursue a little bit of lovin’ on the side, although Jeremy Piven (Weiss) and Annabella Sciorra (Morales) are a horribly mismatched couple with barely a hint of chemistry. Piven has plenty of chemistry with himself, though, so his fans shouldn’t be disappointed in the role.

Goode and Moore more than make up for that lack of romantic spark. Aside from being beautiful together, they actually look as if they’re having fun with their roles. There is no visible discomfort between them, not even in the Big Love Scene, which ends in implied sex between the two characters. This is a step in the right direction for Moore, who has never had problems with playing a gorgeous, feisty teen, but hasn’t always appeared comfortable with her male co-stars. (This isn’t to say she hasn’t had chemistry with them – but then, who wouldn’t have chemistry with a girl who looks like that?)

Veteran TV director Andy Cadiff knows a good thing when he sees it, but perhaps he needs to be reminded that you can have too much of a good thing. He covers up stalls in the script with breathtaking portraits of Moore in the setting sun, glowing at dawn, pouting in the full light of day. If the audience wasn’t already in love with her, they would surely be smitten by the end of the film. The problem with this is that he’s not so much directing her, as he’s encouraging her to sit still and be beautiful. For her to really break out of this teen-star mold, Moore’s going to need a director who pushes her to be somebody she isn’t already.

Chasing Liberty is a surprisingly delightful little adventure. A mundane script is highlighted by the details, set off by the spark between Goode and Moore. It’s a little sexy and a lot of fun, a perfect breather in the dead-heat of the Oscar season and it’s serious fare.