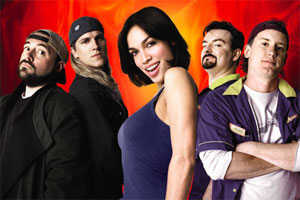 I am, unabashedly, a trilogy geek. But unlike those who often choose between Star Wars and Lord of the Rings, my trilogy of obsession has always been the View Askew Jersey trilogy – Clerks, Mallrats and Chasing Amy. My great love for those Kevin Smith films and his words has already been documented on PopGurls, and thus it should come as no surprise that I went into the screening of Clerks II with great expectations. Those expectations were heightened a bit by a friend’s declaration of the movie being genius – a declaration that I wholeheartedly disagree with.

This is what received an eight-minute standing ovation at Cannes? Really? Was Jay and Silent Bob handing out free samples of their stash before the screening?

Now, I was certainly entertained by the film. Sure, there’s Smith-trademark crudeness for the sake of crudeness in here, but there’s even more of his sheer insane creativity that will stick with you long after you leave. When it was funny, it was hysterically, nearly fall-off-your-chair funny. But when it failed, ouch did it hurt.

The Plot:
Dante and Randal have been working at the Quick Stop and RST Video, respectively, for the past 10 years. When the building burns down, they get jobs at the local Mooby’s (see Dogma) fast food restaurant. Dante has gotten himself engaged to a hot chick, Emma, and they’re off to Florida where her family plans to pay for the wedding, get them a house and prop Dante up with a job. But first he’s got his final clock-in at Mooby’s and a reluctant goodbye to say to his boss, Becky. And Randal ain’t looking forward to that goodbye either.

Like my issues with Joss Whedon’s Buffy the Vampire Slayer episode, “Once More with Feeling,” I wish that there was a lot less back-patting on Smith’s behalf and a bit more thought put into the script. Because unlike the fanboys and girls that can’t see past the obvious flaws in Lucas’ work, I take each installment in fandoms I love very critically. If I weren’t aware of how brilliant and emotionally stirring Smith’s work can be, I could see past the flaws and find Clerks II a fine film and move on. And it is fine, better than fine, but it could be more. While Reality Bites was touted as the film for Generation X, I believe Clerks is a much better gauge of where we were in 1994. And I think that there is a lot in Clerks II that reflects where some of us are 12 years later. Where Chasing Amy leaves you pondering your relationships and Dogma makes you revisit your views on God and religion, Clerks II asks what is it that you really want to do with your life, what makes you trulyhappy. And it’ll make you laugh your ass off before it forces you to think. But will it stay with you 12 years later, the thought of the film immediately creating a sense of who you were and where you were when you saw it? (College sophomore, with my boyfriend and his best friend in a crammed art-movie house.) Will it have an effect on a generation that lasts for years, spawning slackers into action (and permanently infecting their language)? I don’t think so. And, just maybe, that is where genius lies.