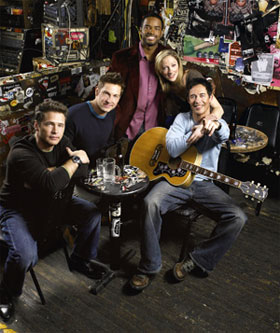 It’s mid-season and the networks have been kicking out the replacements in overdrive lately. Sandwiched between quirky-girl shows like Heather Graham’s Emily’s Reason’s Why Not (already shelved after one episode) and Jenna Elfman’s Courting Alex, I kept seeing promos for CBS’s Love Monkey. Even though it was based on a novel of the same name, I immediately knew I’d tune in and have been checking my Tivo every few days to see how soon I could add it to my To Do List. Granted, I knew very little about the show aside from the fact that Tom Cavanagh was on it (mmm… Tom Cavanagh), that he played a record label exec and that it was shot in New York (really shot in New York, not set in New York and shot in some never-slushy LA backlot). By the time the first commercial rolled around, I jumped over to add it to my Season Pass. And then Love Monkey only got better.

If you missed the premiere, a quick rundown: In a Nick Hornsby-ish world, Tom Farrell, a 30something label A&R guy, loses his girlfriend and high-paying job right around the same time, and all of a sudden he’s forced out of his comfort zone and has to figure out what his next life step is. Supporting him are his group of friends, including his pregnant sister and her husband — Tom’s best friend (Jason Priestley!), and Bran, the obligatory best girl friend (Arrested Development‘s Judy Greer), who’s a girl that’s a friend, but not necessarily a girlfriend — yeah, one of those. While I’m a sucker for best friends that fall in love (Willow/Xander, anyone?) I’m not completely on the Tom/Bran ‘shipper train yet. However, they’re great foils and so well-written that you utterly believe them as best friends, which is a rare feat on television these days.

Tom has discovered Wayne, a wunderkind from Michigan, and is trying to sign him to Tom’s yet-to-be-created label before his former employers can nab the kid. Ah yes, Wayne. Teddy Geiger is so lovely, really, and I think of My So-Called Life’s Jordan Catalano each time he’s on screen. Not that there’s anything similar about the characters (Teddy’s music — and it is his music that Wayne performs — is far superior to the infamous “Red”), but it’s been a long, long time since a boy’s been on TV with that look and those eyes that make you melt. And I’d bet folding money that he leans exceptionally well, too.

But it wasn’t the pretty boys (mmm… Tom Cavanaugh) that made me run out and post wherever I could for people to tune in as soon as Love Monkey was over. I hoped to like the show, I hadn’t expected to love it. The best explanation I can come up with for my adoration is that Love Monkey is teen angst grown up. The stakes are raised from high school fodder — it’s no longer about a bad test grade or not getting a note from a boy you like, but instead that overwhelming sense of “am I on the right track with my life?” and “do I really want to spend countless years with this person or will they just look good in my bed for the next two weeks?” As much as I loved my TheWB and The-N shows, there’s something to be said about relating to people who have a similar life to my own (of course, mine is far less glamorous) — being 31, enjoying my job, but still wondering if there’s something out there I should be doing to indulge my creative side, and truly being content with my singledom but still feeling that it’d be nice to have the right someone to spend a lot of time with.

When Tom says, barely five minutes into the pilot, “When I was a boy, I had this idea of what my life would be like at this age: great job, perfect wife, litter of kids, endless riches… one out of four is not bad”, I know I’ve found a kindred spirit. (Well, aside from the litter of kids.) I like that he’s unsettled, that even while he loves his job, he doesn’t quite know what he’s doing everywhere else. Most television shows on today have an implied sense of the characters being settled in their lives. Even if a doctor (Scrubs, House, Grey’s Anatomy) questions their abilities, they’ve already made a commitment to years upon years of schooling because they knew what they wanted to do. Most cops on TV (Law & Order, CSI:, Without a Trace) all have an unquestioned commitment to righting wrongs and hunting down the bad guys. Hell, even Lost has a given premise that most of us wouldn’t want but it leaves very little time to ponder the existential purposes of life. I like shows where I can relate to characters and if they can go through drama so I don’t have to – even better!

Of course, that’s not to say Love Monkey doesn’t have its problems — like the big, heartfelt and completely cringeworthy Jerry Maguire speech that you know would never happen in the real world. Plus the line about all women over 30 wanting to get married will surely ruffle a few feathers (however, if you stick around to the end, there’s a nice juxtaposition with the boys). And I’m sure that the whole record label experience is glorified. But I’ve long since accepted that most series are glossed and finessed for story’s sake so I take everything with a big grain of salt. From some of the less-than-happy reviews I’ve read, I shall warn you now: If you’re looking to nitpick, you probably won’t be happy.

The second episode, “Nice Package,” made me cringe a little with Tom’s throw to Wayne’s MySpace page. It’s a new wave of integrated marketing that I’m unsure of, but at least the networks have wisened to the fact that the audiences are fed up with the blatant product planning (see America’s Next Top Model‘s CoverGirl moments with Jay, and Project Runway‘s L’Oreal Make Up room and Tresemme Hair Salon). The writers have used “Nice Package” to both enjoy the spoils of integration while also pulling the curtain back to reveal the Wizard’s plan. It’ll be interesting to see what rolls out in the episodes to come.

So, I ask you to please tune in to CBS Tuesdays at 10pm. Enjoy the music handpicked by KCRW’s Nic Harcourt. Indulge in the friendship of Tom and Bren. Get all giggly over Tom Cavanagh in t-shirts over long-sleeve t’s and wonder if he’s wearing chunky rings. Get smitten with Love Monkey.