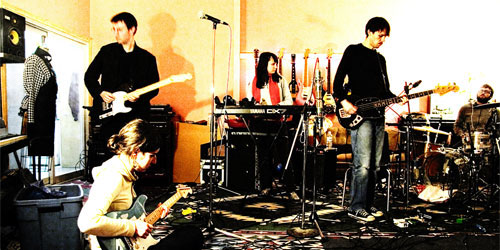 Eager rock fans were still piling into the Horseshoe Tavern in Toronto as the clock began to creep towards midnight; the drizzling rain outside had turned to a downpour, as evidenced from the wet t-shirts and blazers of the indie rock kids who looked relieved to be inside. It was promising to be a night of avant-garde indie rock and roll at its finest: an opening set by NYC’s The Wharton Tiers Ensemble and a headlining set by Toronto’s The Creeping Nobodies.

The night marked the release of The Creeping Nobodies latest album, The Sound of Joy, which was actually recorded by Tiers in New York City. If you’re wondering where you’ve heard that name before, you should check such Sonic Youth records as Confusion Is Sex and A Thousand Leaves, because Tiers had a firm hand in recording them as well. And those, along with the Tiers-produced Creeping Nobodies’ Stop Movement Stop Loss, are all testaments to an artistic punk rock style. The two bands went hand in hand that night.

With an entrance that can only be best defined as the epitome of atmospheric, the band asked for the stage lights to be turned down. Moments later, bathed in darkness, The Creeping Nobodies began their set. “Don’t sleep, don’t, don’t, don’t sleep,” urged singer/guitarist Derek Westerholm as the band backed him up with disjointed percussion and the frantic melodic twinges of guitar on “Fragment.” Although it made an excellent and dramatic opening to a set, on the record it is featured as a closing track. Haunting in both occasions though, it showcases the band’s ability to be dramatic lyrically and vocally, yet at the same time demonstrate what can only be described as a very restrained musical style. A lot of bands would take this particular pathology and run a different way with it, as it would be extremely easy to be the band that yells and screams all over the place without any rhyme or reason, and that’s fine…if you’re “that” kind of band. The Creeping Nobodies are not “that” kind of band though; meticulous and careful, this is a band that makes every sound count for something — be it the random jangling of sheet metal (which was used as soon as the lights were turned down, to mimic the weather patterns outside the bar), or the disorderly sounds of the drums, or the frantic words of Westerholm at the microphone, The Creeping Nobodies bring that kind of educated element to rock and roll.

Along with Westerholm, the band also boasts another haunting voice in Valerie Uher. An assuming presence onstage, Uher opens the record and the show with a cool and smooth vocal style. “Hollow Stems, A Hunter’s Will” is a lingering tune, subtle guitars and an unforgettably ghostly vocal delivery. Uher brings a lot to the band and is a great musical counterpart to Westerholm. Where his delivery can be considered frantic and feverish, hers is style is both calm and chill, together their voices intertwine and become one. An amazing example of this is the song “Treachery” off Sound of Joy… it’s textbook Creeping Nobodies: dark/haunting/melodramatic. Whatever adjectives you use to describe it, it’s a wonderfully crafted song that translates even better live.

Setting up for The Creeping Nobodies, The Wharton Tiers Ensemble made for an evening of delightful distortion — to be blatantly honest, any fan of Sonic Youth would be perfectly at home on a night like this. Tiers, seated at his drum, back to the audience, led the band for a twenty minute set which had the audience enthralled — it seems that this was a night where no one would leave disappointed.