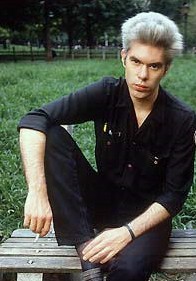 It all started innocently enough. I was a good independent film fan. I went to all the free art films screened at my college. I appreciated movies with unusual narrative structure, innovative cinematography and unusual characters. I read issues of Film Comment and Sight and Sound on my lunch break. I talked the talk, mostly with college boys and male hipster video clerks, engaging them in factoid challenges about film budgets and locations and directorial intention.

I can’t locate the precise moment I went bad, that point at which I moved from being this respectable fan of independent auteurs to an obsessed, crushed-out fangurl, but I know that it was Jim Jarmusch (director of several Cannes-award-winning films, including Stranger than Paradise and Dead Man), who got me started, and he’ll always be my main man.

I also know that my obsession started the way my more appropriate fan relationships did. As with my fan interest in Atom Egoyan or Hal Hartley, I started my relationship with Jim’s work by watching each of his available films as I could. I worked my way through most of his catalogue, and, as with Egoyan and Hartley, sought out interviews and reviews in film magazines and academic journals. But there was something different about Jim’s press. In interviews, he came across as an intelligent man without pretension, as someone with a good grip on both contemporary and 19th century American culture. But more than that, he was, ah, cute. Look at any picture of Jim and you’ll see the gravity-defying white hair, pretty-boy face and pouty lips I found immediately attractive when I first saw a photo of him.

I found myself spending my library work time hunting down articles and interviews that incorporated photos of Jim. I xeroxed them and put them in a special file, convincing myself that this behavior was all part of some sort of legitimate “research” project. And this is where the border between a respectable sort of indie fan behavior and fangurl excess gets fuzzy. Because all of these photos accompanied solid critical work and film analysis, I was behaving like a good fan, learning and gathering information and insight from the director and his critics. But unlike the boys at the video store, I was also putting photos of Jim up on the wall in my office, wallpapering his image on my computer desktop, quoting his witty remarks to friends and creating a web page titled “I have a crush on Jim Jarmusch.”

That was five years ago. Since then, it’s only gotten worse. I’ve found a partner in crime: my best friend April (who has her own similar crush on David Lynch & introduced me to the Twin Peaks fandom). April was my first recruit, and she was an exemplary one. She was the first friend to understand my obsession and participate in it herself. April watched all of Jim’s movies, and all of his cameo film appearances with genuine delight. (Our favorite being Jim’s discussion of smoking in Wayne Wang’s film Blue in the Face, which convinced me that Jim is the most beautiful, graceful, cool smoker. Ever.) She printed out pictures of Jim for me on her color printer, she suggested we make charts connecting the mythical Sons of Lee Marvin on our office wall, and she understood why the episode of John Lurie’s pseudo-documentary “Fishing With John” featuring Jim on a shark hunting expedition was worth viewing and reviewing and reviewing and then later showing to innocent civilians at dinner parties.

So it should make sense that it was April’s bedroom (at 9 a.m. on a Saturday, while she was still sleeping) that I ran into, squealing and jumping around, when I learned from a Jarmusch fan listserv that Jim would be coming to visit our city as part of a retrospective of his work. April immediately got up and started getting excited with me. She did not find it bizarre that I was spastically prancing about and almost hyperventilating after I read the event announcement. She didn’t suggest that perhaps I wait and call my boy (the one who was at that point living in an earlier time zone. The one whose hair I am secretly excited is going white because then he will look like Jim’s kind of foxy) to tell him the Big News at a later hour. She understood why I was pissy about his not being home to answer the phone (at which point I probably should have been more concerned about the fact that he was not sleeping at home, in his own bed) she knew I had my Jim-blinders on and I was frustrated that the boy couldn’t share in the excitement.

She also knew I wasn’t kidding when, in mid-August, I felt compelled to start thinking about what I would wear to the Big Event (which, as I write this, is only hours away), and started worrying about what question I should ask Jim during the Q & A session that we both assumed would follow his panel discussion with film critic Jonathan Rosenbaum. And it’s April’s glittery pink sweater I’ll be borrowing, her elbow that will poke me in the arm and urge me to get up and ask the fangurl question we devised, when we go to meet the man tonight.