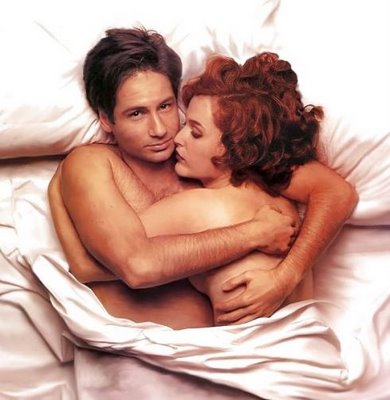 This morning was one of battling musical earworms — in the first shot, Gotye’s “Somebody That I Used to Know” was lobbed at me. I fired back, quite possibly with a little bit of overkill, with the ultimate earworm: Mahna Mahna Muppet-style. (Really, if you ever need to win an earworm battle, or just torment someone for a day, just murmur a little “Do doo de-do-do de-do-do de-do-do de-do-do-doodle do do do-doo do!” at them.)

Yep, that’s it. Only a slight step up from the “do doo de-do-do” and yet just as earwormy and compelling. PopGurl Michelle and I have been known to just send emails or leave phone messages with the line “David Duchovny, Why Won’t You Love Me?” because we knew it would completely take over each other’s brains and end productivity as we know it.

And admit it, what fan at some point didn’t ask that question? Hell, you can fit just about anyone’s name in there although lines like “I can’t help feeling I could love this secret agent man” and “American Heathcliff, brooding and comely” might be less applicable. What’s even better is that there is a video filled with an impressive roster of lipsynchers. After the video reached The X-files set, and Duchovny himself became enamored with it, two assistants, Charles Forsch and Will Shivers, filmed a hilarious piece for the crew’s Christmas party. Keep an eye out for: Gillian Anderson, Brad Pitt, George Clooney, Pamela Anderson, Whoopi Goldberg, Rosie O’Donnell, Jenna Elfman, Sarah Michelle Gellar, Chris Carter, Alex Trebek, KISS and Jerry Springer.