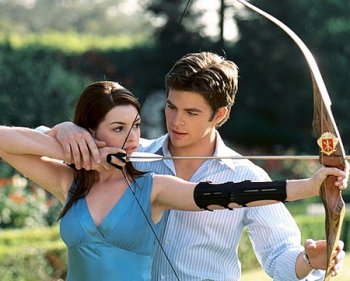 There is something about ugly duckling stories that really appeals to me. (I was going to say, “to girls,” but I don’t want to speak for an entire gender, even if I do suspect it’s true.) So even though my husband was hoping that I was joking when I perked up at The Princess Diaries trailer a couple of weeks ago, I was right there on opening weekend to see it.

Also, there was a rumor that they were showing the On The Line preview before the movie—they weren’t—but even I wouldn’t shell out $6 just to see a trailer. I promise.

The basic premise of The Princess Diaries is this: Mia (Anne Hathaway) is an awkward teenage girl, trying desperately to be invisible to her classmates so they don’t ridicule her. Her mother is an artist, her best friend Lilly (Heather Matarazzo) is a cable-television activist, and they live in a renovated firehouse south of Market in San Francisco. Mia experiences all the usual teenaged angsty things. She can’t speak in front her debate class without getting sick and she can’t play sports. She has a crush on the most popular boy in school, who just happens to be dating the most popular girl in school, a perky blond portrayed by the Cutest Girl in the Entire World, Mandy Moore. Mia is conversely crushed upon by Lilly’s older brother, Michael (Robert Schwartzman), sporting a heinous Oasis ‘do but plenty of shy-boy charm. Everything is turned on its end, though, when one day Mia meets her paternal grandmother (Julie Andrews) and learns that she is the royal heir to a faux country named Genovia, and that she must go through a complete makeover to assume her crown.

Predictably, once Mia completes her transition and becomes a straight-haired hottie, she begins to get noticed by the cool kids. By the time the news leaks that she is in line to be the Princess of Genovia, the dumb boy she has been fawning over has broken up with the Cutest Girl in the Entire World so that he can take her out instead. And when Mia is duped into believing that suddenly everyone wants to be near her because of her sparkling personality, and not her royal bloodline, the people closest to her feel left out in the cold. This means, of course, that when the house of cards begins to crumple, Mia is left all alone with no one to turn to—except for her very understanding chauffer and security person, Joe (Hector Elizondo).

Before I get too much farther into this, I feel that I should point out that, overall, I very much enjoyed The Princess Diaries.

But—and there is a but—there are several aspects of the movie I feel are more harmful to the psyche of pre-pubescent girls than empowering. For instance, in order for Mia to become princess-like, she is forced to straighten her hair, pluck her eyebrows and begin wearing frosty eye shadows. While I understand that being able to stand up straight and learning proper table manners is important for everyone, I feel that basing someone’s desirability on the texture of their hair is sort of shallow.

On top of all this, there is a teeny tiny subplot wherein Mia is convinced that when she finally gets kissed the world will stop spinning and her foot will “pop” up of its own accord. This is really sweet! But. I have a little sister who is undoubtedly going to be experiencing her first kiss very soon, and I shudder to think of the disappointment when it doesn’t rock her world. First kisses don’t rock! More than likely, if it’s your very first, you feel something much closer to nausea. What about the first time a cute boy looks at you like you’re the only thing that matters? It’s way better, and you don’t have to worry about saliva. God. I sound like someone who believes romance is dead…

And finally, and I can’t believe I’m going to say this, Mia has some unresolved issues with her long-lost, now-dead dad. I know! It sounds ridiculous even saying it. But. See. Mia never really knew her father. He just sent her birthday and Christmas gifts and paid for her private school. And then he died, and she was sad, and his mother showed up to make Mia a princess. Did I mention that Mia resists becoming a princess? That at one point she decides to resign the crown? Well, she does. What convinces her to finally commit to her royal duty is a letter from her father. Who she doesn’t know. Who didn’t raise her. He has a lovely beard, and would probably have given nice hugs. You know. If he had ever been around to do so. But he wasn’t, and didn’t provide her with any emotional support, or anything! I guess that having a bitter, father-hating teen wouldn’t have made for a good fairytale, though.

My complaints, you know, mostly sound like things my mother would say, and not like someone who really loves pop culture marketed to kids ten years my junior. I think that, probably, if I were able to turn off my psychosis radar for five minutes, I would be gushing about Mandy Moore’s performance or Heather Matarazzo’s cute shoes. Alas, I’m too busy worrying about all those 13-year-old girls who are going to run to their moms begging for trips to the salon for tweezing and hair-straightening.