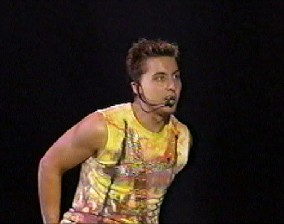 And being a writerly-type person, I don’t easily give up on stuff I’ve written. So let’s just pretend that everyone in the ‘net world wants to read all of my various ramblings. About Lance.

The Eulogy, Tacoma
Our seats (“our” being me and Amy and Melynee) in Tacoma were damn near ideal: 21st row on the floor, center aisle. We were close enough to lip-read as they bantered with each other, but not close enough to get sweated on. Close enough to the catwalk that we could look up their pant legs as they walked by. More than close enough for me to watch Lance and think to myself, “There is no boy left.”

Not that he had mysteriously turned into a girl. Oh, no. Rather, he’s become a man, and looks for all the world like he is trying to put away childish things.

I’ve often waxed poetic about the Big Gay Lance of old. To summarize:

Nothing stays the same forever. First came the cool indifference, documented so well in the Bigger Than Live IMAX. Then there was the infamous “Pop” preview on TRL, when Lance appeared in a tight gray tank top and some arm muscles that. Well. Yes. They were good. Not only had he also learned to dance, he was doing it with something approaching a swagger.

Interviews for the new album and Pop Odyssey tour showed a Lance who had combined his physical hotness with his uncaring attitude. The result? He jumped to the top of teen mag poles and favorites lists everywhere, despite starring in a failure of a movie.

The change was so stunning, so complete, that friends of mine began calling him Raging Heterosexual Lance. He’s buff! He’s pretty! He pretends to kiss girls!

Let’s get back to the point.

So there I was, sitting close enough to see the gaps in their teeth. The first thing I noticed was, seeing Justin live, with curls, is infinitely hotter than seeing him without. (My condolences to anyone seeing the later shows, as he’s shaved them off again.) The second was that, during “Do Your Thing,” it’s clear that JC has the most elastic voice I’ve ever heard on a male pop star.

And then there was Lance. At first glance, the changes weren’t that noticeable. His arms are still ripped, his waist still vees into the slight(er) curve of his hips. His hair is darker, but still spiked. He still has soccer-player legs.

The difference is in the details.

Lance has become an amalgamation of JC and Justin, getting off on the screams of the crowd, twisting his hips to make them louder. There is a confidence there that was missing even last summer – surprising when you think just how miserably On The Line failed. I began to despair that his new heartthrob status had eradicated the BGL I adore. I began to miss him. Until I found the chinks.

There is no better example than at the end of the Beatles/Motown medley. The Boys were coming back off the suspended catwalks, pausing so they could sing the new, exciting, two-step version of “Sailing.” Everyone was wrapping up, JC had done all his emoting, and everyone went back to the main stage. Except for Lance, who was too busy preening at his assigned corner of the catwalk, holding onto the metal railing and shimmying his hips. At some point he realized he was alone, and he turned around to see the rest of them pointing and laughing. Especially Joey. So he ran, ran, ran to the main stage, and when he got there, they flashed a picture of him on the jumbotron. He was blushing, and grinning, and Joey said, “Nice of you to join us.” He blushed some more. Clearly, somewhere in there, Lance is still un-smooth.

Tacoma2002!Lance threw himself into the dance routines, and the crowd, whether or not he was choreographed. He was a hip-popping, arm-locking maniac, sidling up to JC or Chris and asking them, with a cock of his eyebrow, to bring it on. But the Three Signature Moves cannot be repressed, no matter how hard he tries! (And he did try, sometimes catching himself, and putting a stop to it at once.) They snuck in whenever he got lost in the performance, even if they were slightly evolved. For instance, Throw Your Arms Wide seems to have been replaced by Tango Hips with Snapping Fingers. The Lance Dance has gotten a new hip shimmy.

Even with all the overwhelming hotness, I found myself missing my BGL. It made me squirm to think that he’d let his newfound popularity go to his head, that he’s so afraid of losing it that he’s willing to change even his mannerisms.

Heaven, Oakland
We had yet more excellent seats (“we” being me and my friend Jamie), 10th row, about six seats from the catwalk. (For those who’ve seen the show, Justin dropped to his knees in “Gone” right at my fingertips – that’s the side of the stage we were on.) I was given hope almost immediately that Lance had started to lose his grasp on the Tacoma2002!Lance, as he could not contain the Lance Dance at several points in the opening numbers, especially during “It’s Gonna Be Me.” By the time he was crouched in front of the rest of The Boys during “Up Against The Wall,” he was doing all Three Signature Moves, in earnest, including Throw Your Arms Wide. Hell, I may have to make that the Four Signature Moves, since the Tango Hips show no sign of being a passing thing.

Best moment of perfect Lanceness: the new, blues “I Want You Back.” Justin had done his big riff, and was urging JC to finish. JC, in a typical JC move, had taken one look at Justin’s earnest face, and started to laugh uncontrollably. Joey was trying to be comforting, rubbing JC’s back as if he’d choked. Justin, trying to be equally helpful said, “Hey Lance, why don’t you set up the scene for him?” And Lance said, “Okay. So. Imagine you’re in a southern Baptist church in Mississippi.” And Chris said, “Mississippi?” all incredulous-like, because it’s supposed to be Memphis. And Lance said, “What? I’m from Mississippi.”

A Digression, Sacramento
Okay. So I didn’t actually go to Sacramento. But I know someone who did. And I have seen photographic proof that the Lance Dance was out in full force. Isn’t it odd that I can pick it out, even in still photos?

Rebirth, San Jose
And yet more good seats. Me and Jamie, row 13, right at the corner of the catwalk, opposite side from Oakland (again, if you’ve been there, we were directly under Lance, when he swung out over the audience the second time). The mister, my so-cute-I-could-die mister, was sitting 11th row, center, right. On. The. Catwalk.

Now, I have two more shows to go to, both in Chicago. And if they are even half as energetic as this show, it may very well kill me. The boys were on fire. They loved each other, they touched each other, they made each other laugh. JC danced so hard I feared he would give himself whiplash. Justin, who was less sexy than I have seen him in a long time the two previous shows, was snapping his hips in the manner to which I’ve become accustomed.

Lance gave up all pretense of being suave. Not only did he Lance Dance back and forth across the stage, he put a full-court press on that Head Bobble of his. You know the one. He loves it so. Sometimes I think that he wishes he had JC’s hair, so he could toss it around like a glamorous supermodel.

When they came out on the suspended catwalk, he and JC and Joey sang “I Wanna Hold Your Hand” with their arms around each other. And when Joey danced off, Lance and JC turned to each other, and Lance humped JC’s leg. Probably, he was just doing a little pelvic thrust, and JC’s leg was in the way. But. Still. Tacoma2002!Lance never got close enough to anyone to accidentally hump them! It’s progress.

The mister took a picture, because he loves me, of the part in UATW when JC rolls over backwards on to a crouching Lance. You can’t see JC’s face, because he has no bones, and he’s totally draped over Lance’s back. But you can see Lance’s face. And his eyebrows are up, and his eyes are sparkling, and he has some strange open-mouthed smile on his face. It’s like he’s saying, “LOOK! JC is on my back! Isn’t this fun? WHEEE!”

I watched the entire show with teary eyes. “He’s back!” I wanted to shout (unlike in Tacoma, where I shouted “Ohmygod! Justin has a hard-on!” and embarrassed lunec). I jumped up and down, and clapped with childlike glee.

Perhaps it was just the pressure of the new tour that was repressing him. Perhaps he knows that all his real fans, those of us who have loved him since before he got a hot body, appreciate his quirkiness. Perhaps the rebirth of the Four Signature Moves is our thanks.