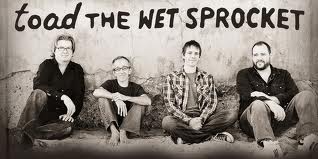 I heart Toad the Wet Sprocket. When you’re young and depressed, and writing the lyrics to The Cure’s “Just Like Heaven” over and over again in your diary, there’s nothing better than more sad music full of longing. Because, you know, that’s what Toad was all about, in the beginning.

When I was in high school, I had this friend named Jenny. She was this total cheerleader type who somehow fell, like me, in with the skater boys. Unlike me, she had this knack for finding bootlegs of Gang of Four and Love & Rockets, and she seemed to always know what was going to be cool next. I’m proud to say I picked this talent up a couple of years later, working in college radio, but at the time, I wanted to “discover” something. So, one day, flipping through my BMG catalog, I saw this band. “Toad the Wet Sprocket.” That sounded sufficiently alternative. I bought it. The album was Pale and I was 14.

Recently, I brought Toad along on a road trip and thought, “Fuck. This band still kicks ass.” So herein lies my annotated gushing about the band, songs, and albums, along with a little trip down memory lane.

Bread and Circus
This was actually my second purchase, although it’s Toad’s first album. I bought it two days after attending my first Toad concert, where I met a boy named Mark. You know, he was hot. Very skater boy with blond hair, all one length, down to his chin. He kept yelling “Always Changing Probably!” at the band, and I didn’t know what that meant. Because I only had Pale, see. So Mark and I danced and he probably put his hands on my hips, if I’m remembering correctly, and after the show he asked if he could drive me home, even though he’d driven three and a half hours from another state to see the band. I agreed, and my best friend worried that I was going to wind up dead on the side of the road. I could have, I guess. But he was cute and had a friend with him (which is worse, now that I think about it), and he drove me home and we kissed in the front seat of the car while his friend sat in the back. The point to this story isn’t that he was hot or a good kisser, but that he told me all about Bread and Circus, which I went out and bought two days later. I am, believe it or not, wearing a jean jacket right now that he gave to me that night, because I was cold.

This album is full of great stuff, but my favorites are:

Pale
The album that started it all. I listened to it non-stop for months after I bought it. Strangely, it’s been stolen from me three times. The original tape got taken out of my first car, a 1975 MGB. They also took, for whatever reason, my gearshift knob, and nothing else. I replaced the tape with a CD, which then went missing when I worked at my college newspaper. That was replaced with another CD, which someone borrowed from my office at my first ad agency, and never brought back. I just replaced THAT copy, a month or so ago, when I found it in the bargain bin at Borders. And what a bargain. This album boulders.

A smattering of my favorite songs:

Fear
This album produced the band’s first big hit, “All I Want,” and thrust them upon the mainstream. Oh, god, I was so MAD because now all these annoying cheerleader types were walking around wearing Toad t-shirts and all the prom themes that year were “All I Want” and I wanted to KILL someone because when I wore Toad shirts years earlier I got made fun of. It was very traumatizing. The second time I saw them in concert was during this tour, and I was working at the radio station. The boys came in to do an interview, play a song or two, and we all went out for Chinese food. I was in heaven, until I realized Glen had gotten married. Then I was depressed. But they were all fantastic, and all shorter than me but one. The actual concert was a disaster, as over half the crowd only knew the one hit song and stood around dumbly for the rest. Plus, some dumb-ass girl got on stage during “Hold Her Down” and started yelling at the band for advocating rape. They almost called the show off halfway through, and when I went to say goodbye to them in their bus they were bitching about how much they hated the success of “All I Want” and Glen was sort of weepy. I felt very ashamed of my hometown, in that moment.

Some of the best songs from this album:

Five Live
I had a feeling this was one of those quickly-release-a-live-album-to-capitalize-on-commercial-success sort of ventures, but it appears to be a promotional CD. The little sticker on the front of the jewel case says I paid $4.50 for it. Hmm. Not bad for five songs. It’s got rocking live renditions of “Jam,” “One Little Girl,” “Scenes From a Vinyl Recliner,” “Come Back Down” and “Hold Her Down.”

Dulcinea
By the time this was released my interest in Toad was waning. I’ll blame the popularity of Fear, because at this point in my life I was still trying to snub anything that wasn’t cutting edge. Seems laughable now, given my proclivities toward a certain pesky boyband. Dulcinea is a fully evolved Toad: from the sort-of-sappy, angsty songs on Bread and Circus, through the more guitar-driven songs of Fear and now you have this. I miss the old days, though, when they sounded like they were recording in tiny studios on a shoestring budget.

A handful of good stuff:

In Light Syrup
One of those rarities and B-Sides albums, I held off on buying this for a long time. Several of the songs were on movie soundtracks. “Brother” can also be found on the So I Married An Axe Murderer album (which you should own for “Harriet, Harriet, Hard-Hearted Harbinger of Haggis”). “Little Heaven” was on the Buffy the Vampire Slayer soundtrack, you may remember it as the song they played at the big dance. “Good Intentions” was on the Friends soundtrack. My favorite here is “Hobbit on the Rocks.”

Coil
By the time this was released, I was buying Toad albums out of habit, and this sat on my CD shelf for many months before I gave it a good listen. It drags in several places, and really lacks the cohesiveness of their earlier work. It’s no wonder that the band stopped recording together some time after this. It’s like they didn’t have anything left to give.