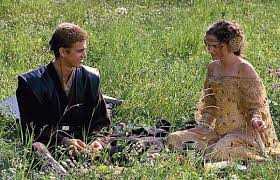 That’s right. You may find it hard to believe, given that I’ve not spent the last six months in a cave, but I was spoiler-free for Star Wars: Episode II: Attack of the Clones. Until 7:30 p.m. yesterday, I didn’t even know about that “Attack of the Clones” part.

I was the perfect vessel for a movie…spoiler-ignorant, ready and more than willing to be shocked and amazed.

I did enjoy the movie. It was a ‘three stars out of five’ kind of enjoyment when I was hoping for at least four, but I wouldn’t use the term “disappointed” to describe my feelings.

Still with me? Let me start with the things I liked.

Chancellor Palpatine (someday to become eeeevil Emperor Palpatine)
I really am enjoying watching the complete and utter treachery of Palpatine and his diabolical plot to eventually get control of the entire galaxy in the palm of his hand. Ian McDiarmid has done a wonderful job making Palpatine into a slick and subtle puppetmaster, and the overall Palpatine plot arc devised by Lucas is one of the diamonds in the rough that is the prequel trilogy. McDiarmid is such a wonderful actor that even Lucas’s dialogue doesn’t sound stilted when he delivers it. (More on the script later, I assure you.)

The Murder Plot
As the movie begins, an attempt is made on Senator Amidala’s life (now that she is no longer Queen of Naboo, she represents her planet at the Galactic Senate.) Much of the movie centers on various characters trying to ferret out the details of who is behind the murder attempts, giving us several scenes that I found satisfying both in the basic quality of storytelling and in the vicarious pumping of adrenaline through my body.

Ewan McGregor
Even though Lucas seems to have seen fit to turn a late-thirtyish Obi-Wan Kenobi into a nagging worrywart, McGregor’s Obi-Wan is somehow still likable, charming through all of the bits of poor dialogue that he’s saddled with. Unfortunately, McGregor’s charm gives him more chemistry with Natalie Portman (Padme Amidala) than her actual love interest, Anakin Skywalker, portrayed by relative unknown Hayden Christensen (more will be said about him later, as well.)

The development of Mace Windu
Samuel L. Jackson, who was little more than a cameo in Episode I, shines here as his character is fleshed out and given the opportunity to show both his “wise Jedi Master” and “kick ass lightsaber wielder” sides.

That’s actually quite a bit of stuff to like in a movie I’m only giving three stars out of five, don’t you think? Ah, but now we’ve come to my biggest disappointment.

Spoiler-free I may have been, but it didn’t take a crystal ball to tell me that Amidala was destined to be Anakin’s lover and the eventual mother of Luke and Leia. I knew the love story had to come soon, and sentimental goofball that I am, it was my fondest wish that I would see it in Episode II.

I loved Han and Leia in the original trilogy. They had chemistry from the first moment they were on screen together, throwing insults at each other. I have watched the kiss scene from Empire about a million times. (You know, where she’s trying to help fix his ship, and hurts her hand because she’s too busy arguing with him to watch what she’s doing, and he takes her hand to rub it, and my stomach does back-flips in my midsection because Harrison Ford was so excruciatingly hot I thought I would die? Or maybe that’s just me.)

I so wanted another love story, amid all the starfighters and lightsabers and political intrigue.

What I got was a creepy stalker boy who fondles her when she so obviously doesn’t want him to, and a girl who seemed to go from remembering him only as a little kid one minute, to hearing him talk about how the Senate should be disbanded and one ultimate, supreme ruler should take over the Galaxy, to hearing his admission that he slaughtered an entire camp full of people because two of them kidnapped his mother, to suddenly being in love with him.

There was no. Reason. For. Her. To. Fall. In. Love. With. Him. Every time he was around her, he was a detestable, whiny jackass. This is not the type of person an intelligent and powerful woman like Amidala would fall for.

Add to this the fact that they have no chemistry with one another, and it’s a train wreck. I can’t even begin to explain their lack of on-screen chemistry. Maybe it’s the really bad dialogue they had to force through their lips, maybe it’s because Lucas (who directed again, against his usual “I’ll direct the first one and hand the sequels off to someone else” ways) seems to have directed Christensen to play Anakin as a generation-y, valley boy, slacker type who laughs just a bit too much like Beavis for my tastes.

All I know is, one minute she’s telling him, “You’ll always be that little boy I met on Tatooine” to macking on him once they’ve flown back to her home planet to keep her safe from her attackers.

It made no sense. I actually threw someone out of my office today for trying to tell me the love story was touching and believable. I don’t allow crackheads in my office, and only someone on powerful psychotropic drugs would fail to be bitterly disappointed at the ham-handed way this seemingly vital part of Anakin’s story was botched.

Honestly, the mucked-up love story would have been enough to detract from the movie, but then Lucas had to go and write the script without letting anyone else edit him, as I believe also happened for Episode I‘s script.

And if someone did edit him, that person is the most brown-nosing yes-man on the face of the planet, because no sane person could read some of this dialogue and suffer through some of the uncomfortably out-of-place moments of lightheartedness and not run their red pen right through it.

Think, for a moment, of what it’s like when you and a group of people are working on a project. There are moments when you’re all tired and punchy, and someone suggests something wacky, but inappropriate to the tone of that project. “Ha, ha,” you all say, throwing out any thoughts of using the wacky suggestion, and you have a cool little inside joke that you’ll all remember and smile about later.

When that happens at Lucas’s joint, apparently everyone there is too scared of George “The Legend” Lucas to tell him not to put it in. If Lucas pooped on a piece of paper, the people who work for him would frame it and call it art. It makes me sad, because there are so many wonderful, promising elements to the main framework of the story he’s told so far, that all of the stupid, throwaway crap that someone should edit out for him just ruins it all.

It’s this “can’t say boo to George” attitude that gives us lines like “I’m trying to find myself” when Artoo is dragging Threepio’s detached head back over to his body.

For those of you out there who aren’t Star Wars geeks, we’ve known about these mysterious “Clone Wars” ever since the very first Star Wars movie, when the elderly Obi-Wan tosses out the detail that he and Luke’s father fought in them together. I’ve wondered for so long what the Clone Wars possibly were, and since I was spoiler-free, I wondered a lot recently if I would finally get to see how it all started.

And I did, but I had to endure Threepio’s “Oops, the parts of my body got separated from each other and re-integrated into other parts of droids” antics in the middle of it, distracting me from becoming lost in the battle as it unfolded in front of me.

George, why? The X-Wing pilots weren’t reciting dirty limericks about Wookiees while they were making their assault on the first Death Star so you could lighten the tone of the movie. They were all business, and you felt it when guys you hadn’t even seen before died when their starfighters were shot down.

But I found myself unable to really become engaged in this first battle of the Clone Wars, even as I watched Jedi being cut down by an advancing and outnumbering droid army, and it was because it was interspersed with Threepio foolishness.

I have more niggly problems with the movie, but it’s all fangirl stuff. We’ll be here all day if I write a diatribe of how stupid Obi-Wan will look for not figuring out that Palpatine is behind both sides of the war, when he actually has all the pieces of the puzzle in front of him at the end of the movie, plain as day.

Never mind that the most powerful Force users in the galaxy can be in a room with the most powerful dark-Force user and not feel a twinge, yet they can feel Anakin’s pain when he makes a difficult discovery from halfway across known space.

Never mind that Anakin has had nightmares about his mother (whom he left to languish in slavery while he trained to become a Jedi for ten years… you’d think the Jedi Council would let him go buy his mother out of hock in that span of time, wouldn’t you?) for months, yet only decides to go to Tatooine and see what’s going on with her once he’s finally been given his first solo assignment as a Jedi, which is, coincidentally, to protect the life of the woman he professes to have loved for those same ten years, and pursuing his mother will clearly put Amidala’s life in utter peril…

My reaction, it’s mixed. My head wants to love it, but my heart remains largely unmoved. It was too sterile, with moments so full of unfulfilled promise, I’d like to weep if only I could summon up the desire to do so. Three stars out of five is the best I can do.